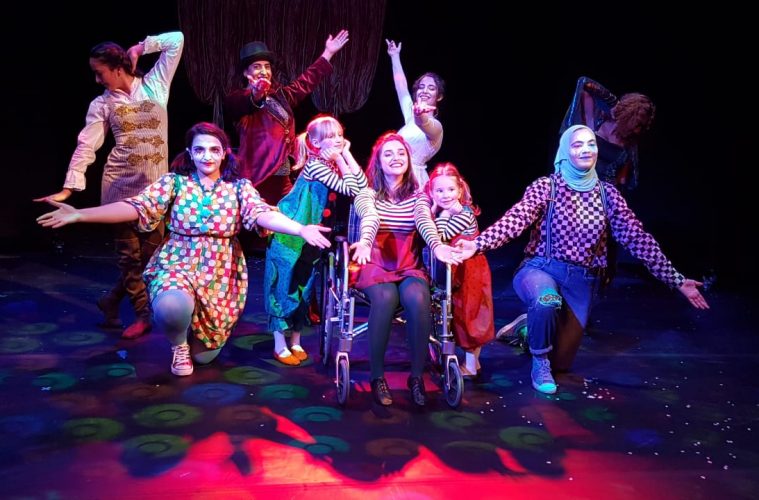 A performance of Cirkus at AUS | aus.edu

The world is witness to how Dubai has developed leaps and bounds over the past two decades. Yet, some of the most significant cultural development has been taking place right next door, in Sharjah. The American University of Sharjah (AUS) has become the first university in the United Arab Emirates (UAE) to have accredited performing arts courses, with a department that has performances completely developed and performed in-house.

This has been a decade-long journey, inspired by current head of department and the first theater professor of AUS, Professor Anthony Tassa. He joined AUS in January 2008 in a program that only offered a couple of music history courses. Upon his arrival, the university added theater appreciation, and he showcased the first AUS theatre production of Romeo and Juliet. Tassa arrived at AUS in anticipation of developing a theater major, and in his eleven-year journey thus far, the AUS Performing Arts Program offers highly sought-after minors in music and theater. From only having one theater appreciation course and one production each semester, the program now presents seven to nine music and theater shows in a year; these may run anywhere from two to seven nights.

Students at AUS can choose to minor in theater | aus.edu

What is most commendable is that all of these landmarks have been achieved by determination more than anything else. The resources aligned with the performing arts department are not many, yet they have made it work and continue to create magic. Due to unavailability of a formal theater, the department has transformed a rotunda into their place of work. This reflects Tassa’s mindset, as he believes:

“Resources should not hold a person back if the desire is there. Theatre can happen with nothing or with everything; all one needs is the will and the desire to create.”

This attitude has helped propel the AUS Performing Arts to where it stands today. In a city that exudes culture but is also conservative, juggling content and artistic freedom is a delicate balance to manage. In this ongoing journey, which began in 2008, Tassa has uncovered an oasis of performing arts in the heart of the Arabian Desert, and his eyes are set on goals that are yet to be achieved: a major in theater and even in music, and a building dedicated to the performing arts. So, keep an eye out for more arts and performances making headlines from the AUS Performing Arts Department, and if you plan to visit Dubai anytime soon, check if there are any performances happening at AUS.