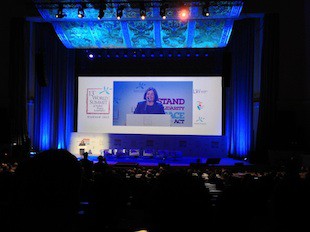 Highlights from the World Summit of Nobel Peace Laureates – Part 1

This article is part of a series of articles on the 13th World Summit of Nobel Peace Laureates. Follow the series here.

WARSAW, POLAND. From October 21-23, Warsaw is being transformed into the capital of peace, hosting the 13th World Summit of Nobel Peace Laureates.

This ROOSTERGNN series will be highlighting key points, quotes and more. Here are some highlights from today’s sessions:

Mairead Maguire, who was awarded the Nobel Peace Prize in 1977 for her work for peace and a nonviolent solution to the ethnic-political conflict in Northern Ireland, an award she shares with Betty Williams, spoke about Syria, Palestine and other conflict regions, argued for the need for good media:

“We have to challenge the media to tell the truth of what is happening within these countries. We need good media. The media have let us down. So we have to look for alternative forms of media. We have to educate ourselves as to what exactly is happening in that country. And then go in and help.”

Former President of South Africa Frederik Willem de Klerk, incited the audience to rethink the position of Africa. In this context, he spoke about Africa as a whole, without singling out South Africa as is commonly done in international relations:

“The developed world, with the exception of China, I think don’t have a coherent strategy with regard to Africa. Africa is going to play a growingly important role in the global context. If you look at predictions about the possibility of a food crisis, Africa is the continent which can solve that food crisis. If you look at the Middle East and the importance of its oil, Africa is beginning to offer the alternatives which make the Middle East’s oil less important. If you look at growth rates, next to China, Africa is performing almost the best in the world, many countries in Africa. So, somehow or another, I think the developed world, the leading countries of the world, the European Union and its members, the USA, need to develop a proper strategy with respect to Africa.

China has one. China is securing its access to the minerals and the natural resources of Africa. China is in its own way reaching out and helping socioeconomic development in Africa. They are making the mistake of bringing Chinese labor in, instead of creating jobs in Africa. So, I want to make a plea for a reassessment of the importance of Africa. It is the continent which holds many solutions for a troubled world.”

Prof. Dr. Muhammad Yunus provided a memorable explanation of the difference between conventional banks and his bank:

“How did I create the Grameen bank in 1983? Well, it was very simple to find those rules and regulations which make it work. All I have to do is look at the conventional banks and how they do it. Once I learned how they do it, I just do the opposite.

Dr. Ira Helfand, representing the International Physicians for the Prevention of Nuclear War, was adamant about the fact:

“There has been a myth that somehow nuclear weapons saved us from a great conflict after WWII. […]. These weapons are far too dangerous, they do not provide for our security; they threaten our existence. […] No one should have these [nuclear] weapons.” 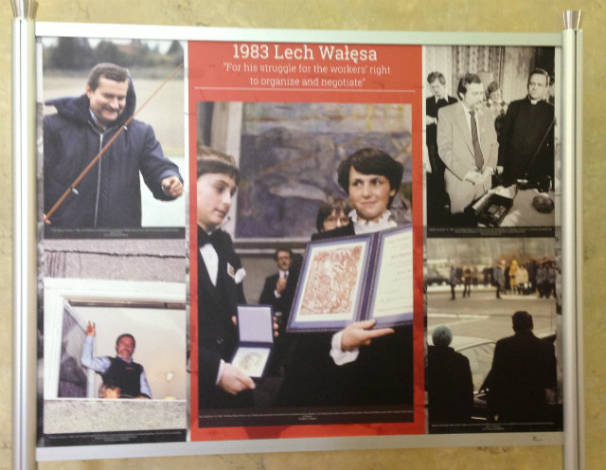 Former President of Poland Lech Wałęsa, won a round of applause when stating that technology should be introduced to monitor politicians. Specifically, he proposed that politicians should wear and be followed by microchips, so voters could form truly informed opinions about them. Maybe no one would want to be a politician then, he asked.

Speaking with Peter Launsky-Tieffenthal, Under-Secretary-General for Public Information at the United Nations, both Wałęsa and Corrigan argued for a reform of the United Nations to reflect the world. Specific Generals should be determined, for example, according to Wałęsa.

When asked whether the Organisation for the Prohibition of Chemical Weapons merited this year’s Peace Prize, Iranian lawyer Dr. Shirin Ebadi argued that there are many individuals fighting for peace day-by-day. The Prize can only go to one. Let’s not forget about the rest.

This article is part of a series of articles on the 13th World Summit of Nobel Peace Laureates. Follow the series here and read Part 2 here.
This website may use its own and third-party cookies to improve its services. By interacting with our website, you authorize this use. About our Cookies Policy.