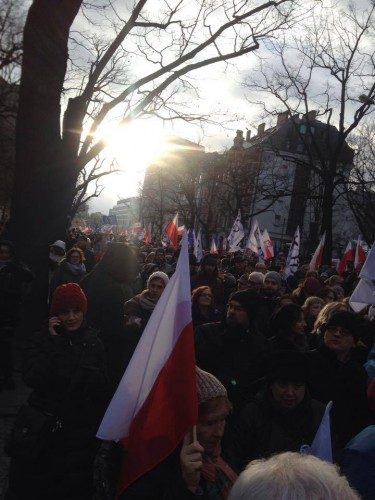 Democracy from Warsaw with Love

I was born in December of 1994. In a free European country, which has just shed the chains of its socialist past in 1989. In December of 2015 I marched for democracy. In the very same country, which has over time become a proud member of the European Union and NATO. The past parliament elections were the first ones I took active part in. And the first which are, after 25 years of freedom, truly prepared to deliver the Polish society a near-to dictatorship experience.

Not even 4 weeks have passed since the Law and Justice party took more than half of the seats in both houses of parliament and successively began clearing any other governmental institutions to make space for their own loyal party members or sympathizers. We, a 40 million nation, have lived through 4 weeks of consistent undermining of our legal system and witnessed the commencement of the seizing of basic freedoms.

Freedom of speech and artistic expression battled an attack led by the new minister of culture, Piotr Gliński. A rosemary crusade blocked the entrance to a showing of “Death and the Girl” since apparently it was the director’s intention to show a live sex scene. To be honest, I wasn’t even planning on seeing the play, but when I heard the minister himself petitioned for censoring of the showing, I decided to purchase the tickets as fast as I could. Unfortunately, the theater already sold out. People rebelled, they will not stand for the return of the control of public consciousness. Poland had 49 years of that. Enough is enough.

All throughout minor incidents, such as the above mentioned dramatic drama, we are witnessing a regular coup d’etat when it comes to Poland’s legal order. The constitution of 1997 established a Constitutional Tribunal, which is meant to control normative acts that are feared to prove unconstitutional. It is the last instance able to block a law with such implications. Judges, although chosen by the parliament, are assigned for long-term, so as to not turn into a political body. Since the power was seized by Law and Justice, the party has been wanting to gain influence in the Tribunal. It was already outwardly admitted, that if it remains in its present form it will not stand for many of the newly created law projects.

And so five new judges were chosen. In the dead of night, following a debate which can hardly be called parliamentary. No thought was given to the 5 judges chosen by the former parliament, which completed the process, since indeed 5 spots where to open up in December. Petitions were filed, nomen omen to the Constitutional Tribunal, which was forced to proceed in its own case. Law and Justice argued the 5 judges chosen by the resigned government with the violation of the law. The Tribunal stated that 2 of them where indeed chosen unconstitutionally, but 3 others were to be assigned to their places.

The president, Andrzej Duda, a former member of the Law and Justice party, who won the elections in May of 2015, publicly claimed he will not receive the vows of the 3 judges. The government at first also publicly stated it will not publish the Tribunal’s ruling. Without such action the law cannot be implemented. In the last few days the government’s spokesperson went back on the word and began explaining that it will be published, that no deadlines have been passed. Yet.

All throughout this crisis, Jarosław Kaczyński, the Law and Justice leader, a shadow figure behind all and any actions of the government and president, claimed the ruling should not be published, that there are better and worse Poles, that these worse Poles have a gene of national treachery. I am that worst version of a Pole.

And so I got up and out today. I went to join a march of 50 thousand fellow citizens. We walked through the major arteries of our capital, Warsaw, and many smaller towns. We walked for our freedoms, for our beliefs, for law and order. We had national flags, which fluttered in the wind right next to flags of the European Union. We chanted for the president to resign, for Kaczyński to leave our flourishing country alone. We stood up against the decision of 5 million voters who chose the Law and Justice party and whose voice is said to represent that of the rest of nearly 35 million.

I was born in 1994 in December. In a free, independent, flourishing Poland. A country which was venturing out west, picking up pieces of its difficult past and looking forward to the challenges of all the tomorrows to come. I want to believe that in December of 2015 I live in a European, democratic country, which has been on its march to freedom for far too long, and will now stand its ground. I know this is just a rough patch we are passing by. And we will. We will pass by, with a smile on the face of a nation calling out for law and justice. Having dumped the capital letters.