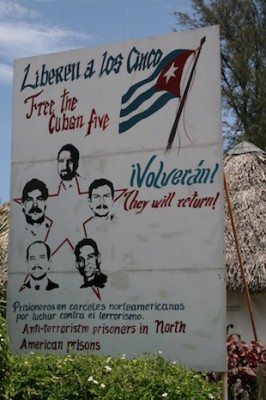 Fighting for the Release of the Cuban Five

LONDON, UNITED KINGDOM. In 1998, five Cuban-American men were incarcerated amidst political turmoil between the United States and Cuba. The Cuban Five, as they are known, were tried and convicted of all charges: most seriously, espionage conspiracy of US national defence, as well as one man’s charge of conspiracy to commit murder. Fifteen years later, four are still serving sentences, ranging from fifteen years to double life in prison.

The International Commission of Inquiry into the case will be conducted in London on March 7 and 8 in the defence of the Cuban Five: Gerardo Hernandez, Ramón Labañino, Fernando Gonzalez, Antonio Guerrero and René Gonzalez. The commission hopes to raise international cries for the release of the remaining men, providing evidence from the case, first-hand accounts from witness, including family members and released member René Gonzalez.

In 1998 the men were arrested in the city of Miami, a breeding ground for aggressive and violent groups with a hard right-wing, anti-Castro agenda, set between the relational turmoil between the US and Cuba. Terrorist groups operated outside of Miami with the hope of overthrowing the socialist Cuban government.

“The Cuban Five went to the United States [Miami] to defend their own homeland. They were sent by the Cuban government to infiltrate the terrorist groups operating out of Florida,” said Rob Miller, director of the UK Solidarity Movement for Cuba and spokesman for the International Commission.

The United States’ justice system, however, believed their acts as anything but noble. According to the case’s prosecution, the five were working to obtain national defence information.

Falling prey to the prosecution’s harshest allegation, Gerardo Hernandez was charged for conspiracy of murder, due to his alleged involvement in the 1996 shoot down of two planes belonging to “Brothers to the Rescue,” a Miami-based Cuban exile group.

The prosecution, however, failed to support their claims. There was no evidence presented in the original trial that proved the men had transmitted national security information that was unavailable to the public, as well as Hernandez’ involvement with plans to shoot the two Cabaña airliners. According to the Voices for the Five Campaign, these charges are a result of an unfair trial, prescribed after multiple appeals to change venue location.

“It was unheard of that the trial was not moved out of Miami, which was the one place they could not get a fair trial. The press [in Miami] declared the men guilty before the trial was heard, and any juror was liable to come under threat and intimidation [if found in favour of the five]. The men have suffered ever since,” Mr Miller maintained.

This suffering has included denied visitation rights from family members, including the wives of the Gerardo Hernández and René González after repeated applications for visitation VISAS, solitary confinement for parts of their lengthy pre-trial detention, as well as limited access to the five’s attorneys and defence evidence. National organisations such as Amnesty International and the UN Working Group on Arbitrary Detention have raised concerns over these injustices. Though neither body has claimed the men’s innocence, they have asserted the inequity inlaid in the case, most significantly with the refusal to change the trial location out of Miami and the consequently disproportionate sentences.

In any normal procedure, they may have received two to four years of imprisonment for acting as illegal operatives. The men have confessed to this operation without registration to do so in the US; however, they have stated it was purposed only for the protection of Cuba and without handling of national defence or classified information.

In a similar case, a Jordanian citizen known as Khaled Abdel-Latif Dumeisi supplied information to Baghdad intelligence services. Dumeisi was sentenced to 3 years and 10 months in prison with the same offences of conspiracy and as unregistered foreign agent in 2004. René Gonzalez, the only released member of the five, was sentenced to 15 years in prison for identical charges.

The men have confessed to acting as illegal operatives without the necessary papers to do so, but for the only purpose of infiltrating dangerous Miami-based groups. It was not to obtain classified information from the US national security. Within their community’s turmoil, their work could not have been if registered as operatives for Cuba.

“The five are very much seen as brave men who went to the United States, purely to protect their own country against violent attacks. They are revered and there is a massive campaign within Cuba to bring them home. They are seen as martyrs, in a military fashion. Their difficult circumstances are a result of their information that could have alerted proposed terrorists attacks in their country,” said Mr Miller.

Politicians, academics and international personalities are expected to appear at the International Commission. There will be a panel of lawyers and judges to objectively assess the material presented and the commission plans to publish the panel’s verdict.

“We hope to raise a international united voice at the International Commission. The world is saying to send these guys home.” The event hopes to press President Barack Obama to grant a presidential appeal for the men’s immediate release.