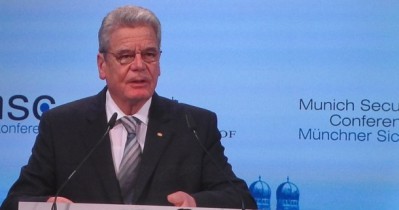 MUNICH, GERMANY. Joachim Gauck, Federal President of the Federal Republic of Germany, has opened the 50th Munich Security Conference. The anniversary marks a key occasion to look back, but also to look ahead, he said. In fact, the historical trajectory of the Munich Security Conference, with its Cold War origins, mirrors much of the history of Germany itself, according to Gauck.

“This is a good Germany, the best Germany we have ever had,” he affirmed, mentioning that he himself had grown up in the aftermath of WWII. As opposed to then, Germany is now based on the pillars of peace and cooperation. Gauck even went as far as to say that some inhabitants have claimed, “why repair something that isn’t broken?”, perceiving today’s Germany as a near-perfect state.

But according to Gauck, Germany cannot stand still. “Swearing on that which has long been established is not going to be enough,” he said.

Yes, on average, Germany is more globalized than other countries. But is Germany doing everything the country can? How is Germany helping crises in foreign lands? In Africa? In the fight against terrorism? We need a more decisive Germany, Gauck argues.

With respect to military interventions, not intervening can even have greater effects than intervening, said Gauck. Germany can benefit from increased collaboration with other countries. In today’s globalized world, “no state can solve problems alone,” Gauck stated.

To conclude, he incited the audience to trust in Germany. “The time of mistrust is over,” he said, referring back to the “best Germany” he believes his country to currently find itself in.