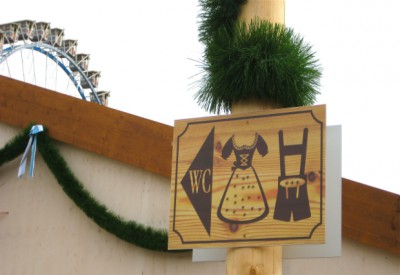 MUNICH, GERMANY. “O’zapft is! It is tapped!”

I longed to hear Munich’s mayor exclaim his traditional Bavarian words of welcome, opening the annual Oktoberfest upon tapping the first beer barrel.

My decision to go had been last minute, an example I don’t recommend you follow; prices double and triple when the festival is on.

All those hours at the gym had paid off: my Dirndl, the traditional Bavarian dress I had bought a few weeks earlier, still fit me perfectly. My apron tied and my cleavage pushed up, I was ready for some festival flirting.

The Schottenhammel Festzelt, one of the oldest, largest and nowadays hippest beer tents, was bulging to the brim of its 10,000-person capacity. An impatient crowd pressed itself towards the main entrance doors, clogged bottlenecks where only those with a reservation, -many of them booked months ago at steep prices,- would eventually trickle in.

In despair, I was already tempted to pull out my phone and snag some last-minute tickets off eBay. But my friend Anna, a Münchnerin, or Munich native, saved me from supporting such deceptive business practices (reselling tent tickets at higher prices is illegal according to festival rules).

Within minutes we had circumvented the central congestion and stood at the back of the tent. A wooden rectangle unexpectedly protruded forwards, and a muscular security guard appeared behind the secret doorway.

Always a step ahead, Anna had wisely made a point of seducing the guard the night before. He signaled us in without further ado. Now, I, too, couldn’t wait to get my share of testosterone.

The bitter cold air from outside clashed with a rush of humid steam. My glasses turned foggy, vapor obscuring my sight. From the stew of scents first emerged the flavor of crispy Hend’l chicken skin. Next came the salty aroma of my favorite: freshly baked Brez’n, pretzels hand-crafted with Bavarian dough. My feet shuffled along a sticky floor of spilt beer and into a sweaty, inebriated crowd.

Adrenaline was darting through my veins. Waving a scrap of paper in front of my eyes, Anna forced me to refocus.

“Ruf mich an. Call me.” Beyond a doubt, an invitation to flirt, with a cell phone number scribbled underneath. She had already scored another man’s number?

We plumped down at our table, exhausted. That is, I was.

Anna, however, was bubbling with energy. The well-proportioned waiter seemed to have set his eyes on her. While I certainly benefited from her popularity, -he immediately brought us our Mass, the standard one-liter beer served in a stein,- I was getting frustrated.

When the good-looking guy across from us, too, winked at Anna, I had had enough: Why on Earth is no one flirting with me?”

I had barely blurted out my question when I felt a tap on my shoulder. “At last!” I thought, a man had noticed me.

I turned. It was a middle-aged, short-haired woman. So I was attracting older lesbians now??

I glanced down at the bow on my apron. A light bulb slowly went on.

Tradition has it that a bow tied on the right side of your waist means you are taken, while tying your bow on the left means you’re single. So I had been signaling all along that I was in a relationship! (At least I hadn’t tied it in the middle of my waist or on my back – that would have meant I was a virgin or a widow).

“Be right back,” I excused myself.

The restroom reeked of urine and transpiration. Holding my breath, I marched straight on, eventually elbowing my way to a spot in front of the mirror, and retied my bow on the left. Armed with newly inspired confidence, I re-entered the main tent.

Some might call it coincidence. I say that faith can move mountains, and a bow on the left works miracles.

In no time, an attractive young man approached me. He was wearing Lederhosen, the typical Bavarian leather pants.