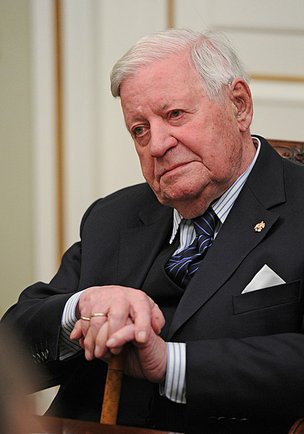 Great statesman and insightful leader, architect of the European Project and father of the European Monetary Union, Schmidt served as German Chancellor from 1974 to 1982.

His were, indeed, difficult times. He had to cope with persistent economic crisis, rising unemployment, stagnating talks with European leaders, France’s economic decline, Britain’s willingness to renegotiate its membership in the European Project, Italy’s near financial collapse, and, not last, Russian expansionism and the ghost of a military escalation.

It is worthy remembering that so much has changed from those years, yet the picture does strike for a few similarities to our age.

It has been said that the difference between a politician and a statesman is all about prospective: a politician thinks of the next election; a statesman of the next generation. In spite of his proverbial pragmatism, Schmidt was a statesman, a man with a clear idea in mind of where Germany, and Europe, should head for.

Internationally, he devoted his efforts to advance the political and economic cohesion of the European Community. He supported British membership of the EC by appearing at Labor Party Conferences and Summits between 1974 and 1975; he was ready to help Italy in late 1974, negotiating with President Rumor the level of the currency deficit of the Federal Bank. Along with French president Valéry Giscard d’Estaing, Schmidt was also a leading proponent of the European monetary union and the European Central Bank.

His insights about the current political and economical situation of Europe are brilliant and persuading. In the last years, the former Chancellor has defined “problematic” the state of Europe, because “it lacks leaders”, “people in high positions in the national states or in the European institutions with sufficient overview of domestic and international questions and sufficient power of judgement”. Youth unemployment in Greece, Spain, Italy is a timebomb, which may raise youth against their elders. “We need a better co-ordination of fiscal policies. We need more solidarity in order to cope with these debts”.

With him, Germany and Europe lose one of its great leaders, a political institution.