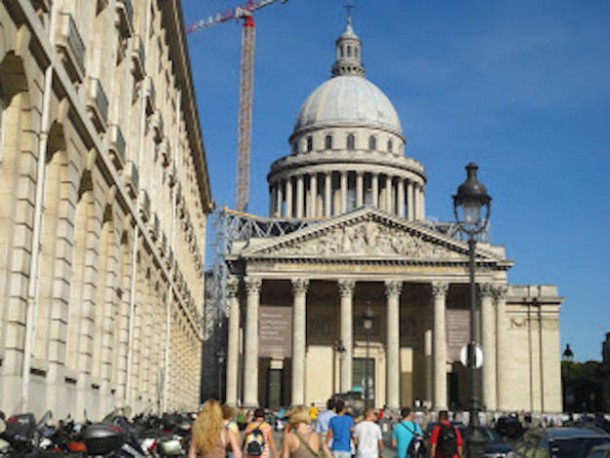 Study Abroad in Paris: My Connection to the Latin Quarter

PARIS, FRANCE. An exquisite building stands out as I look to the left from my balcony view room. Its majestic dome captures my attention whenever I am wandering around the Latin Quarter. Because I live so close to Panthéon, I’ve built an indescribable connection with this building; it has helped navigate my way back home, provide me with new insight on the architectural history of Paris, and has been the backdrop to my nights in cafes, and bedroom gazing.

At a first glance, I thought the Panthéon was just a parliament building from the way it seems to resemble other governmental buildings in Paris such as Assemblée Nationale. It was first a neo-classic style a church built in 1758 and was dedicated to St. Genevieve, the patron saint of Paris. But after the French Revolution, the building lost its role as a church and became a mausoleum for the entombment of distinguished Frenchmen who have sacrificed their lives or who did something great for France. Its unique façade tells a story; much like the façades at the Louvre and Cathedral Notre-Dame. The figures on the façade seem to be in a Greek Temple and the inscription reads Aux grands hommes, la patrie reconnaissante (“To its great men, a grateful fatherland”), and this part of this building alone reveals how France was fascinated with things associated with Greek and Roman characteristics in the past.

Upon entering, the Corinthian columns welcome you into an exquisite open space with paintings and sculptures that give off “revolution” as a key theme. The front open space of the Pantheon has been one of my favorite places in Paris to sit down and reflect while also offering me a nice peak of the Eiffel Tower.

The building has helped me navigate home –kind of how the “north star will take you home”, the pantheon has been my north star in navigating where I am in Paris. I feel like I’ve grown so much this summer in building the confidence to navigate by myself in a big city. Before this trip, I felt so reliant on electronics to take me to my destinations but after utilizing my Paris pratique map and noting different monuments, signs, stores, etc., I have learned map out my own trails and returns to and from home while feeling comfortable to venture out new routes. 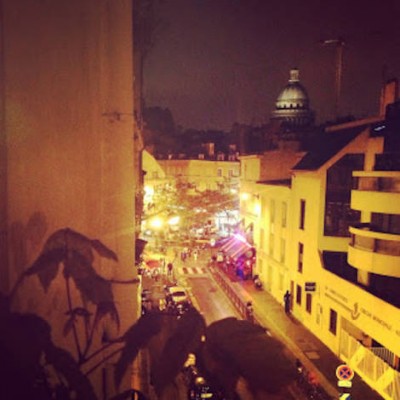 View from my balcony | Jehan Jawad

Living in the Latin Quarter, I have found other connections to this arrondissment, aside from admiring the Pantheon. I was so astonished to see so many Lebanese restaurants just in the Latin Quarter alone and was excited that I could get by speaking Arabic when I couldn’t find the write word to say in French when ordering food/looking for directions. There is also a Lebanese maronite church in the Latin quarter that is somewhat unusual to see, even in areas in the U.S that have many Lebanese dwelling there.

I can truly say that I am lucky and blessed to have spent my last month living in the Latin Quarter because it has been an important factor in making my experience insightful, meaningful, and unforgettable.