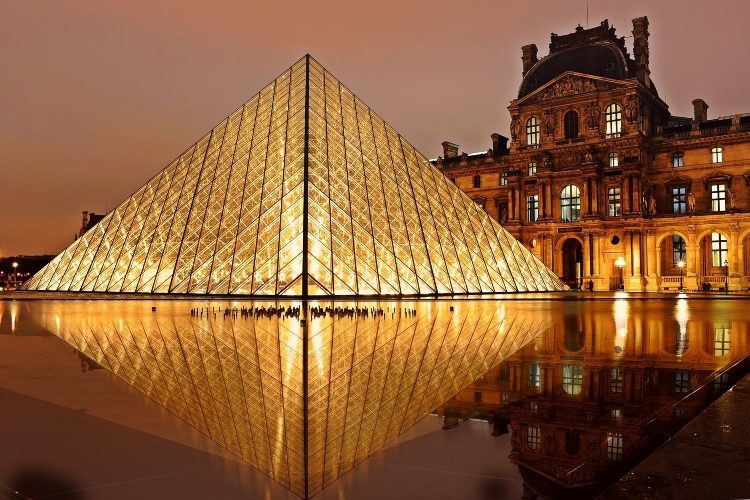 Ten Things You MUST Do In Paris

Also known as the Basilica of the Sacred Heart of Paris, this majestic church situated at the top of the hill of Montmartre offers stunning views of the city. Although it’s a climb of 270 stairs to reach the top (there is a funicular as an alternative at the cost of one metro ticket), reaching the top definitely makes it worth it.  As the second highest point in the city, it’s a good idea to head up to the Sacre-Coeur on a clear day to get the best panoramic views of Paris. When I visited, I went for sunset and enjoyed the end of the day from above, which made for amazing scenes. While many head to the top simply for the views, to enjoy the performers who frequent the area, many others choose to head inside to experience the beautiful architecture. It is free to enter, and is open year round from 6 a.m. to 10:30 p.m.. The history of the building is fascinating, being the site of a Druid temple built by the Gauls to worship Mars and Mercury. Although the Church doesn’t offer a guided tour, there are plenty of free audio guides you can download to make sure you don’t miss a second of the history.

Paris is just about heaven for chocolate lovers, and a steaming cup of chocolat chaud (hot chocolate) is just what you need on a wintry visit to the city. Angelina is situated directly across from the Tuileries on Rue de Rivoli, and is a firm favorite with Parisians. In case you didn’t know, this popular hot chocolate is so thick and rich that you need a spoon to tackle it.

3. The Palace of Versailles

This one is a day trip outside of Paris, but absolutely worth the journey. It’s easy and cheap to get to the train from the centre of Paris to Versailles, and then the Palace is only a 13-minute walk from the station. A symbol of royal power and opulence throughout French history, the Palace of Versailles is a central figure in not only the Ancien Regime but also the French Revolution. Transformed from a hunting lodge to a chateau by Louix XIII, and then expanded into the opulent structure we know today by Louis XIIII, also known as the Sun King. Queues can get long, particularly during tourist season, so it’s a good idea to buy a ticket in advance. There are over 2,300 rooms in the palace itself, as the additional buildings and gardens, so be prepared to spend all day at the Palace. Make sure you visit the Hall of Mirrors, the room is definitely one of the most breathtaking places to find yourself in.

The observation deck at the top of the tower is a great alternative to the Eiffel Tower. The first time I visited the city, it was in a large school group, which the Eiffel Tower doesn’t allow, so the chance to see the city from the Montparnasse was a great opportunity. Priced at 18 euros per person, or 23 euros for a day and night ticket, the tower offers breath-taking panoramic views of the city, with the added bonus of having the iconic Eiffel Tower in the background of all of your photographs! If you opt for an evening ticket, you can enjoy a glass of prosecco while you watch the Eiffel Tower sparkle on the hour, every hour.

One of my favorite things to do in the city is to stroll through the gardens of the city, which in the summer time is full of locals enjoying their lunch breaks, soaking up a few rays of the French sunshine or, in the evenings, enjoying a bottle of wine with friends. There’s an atmosphere that feels authentically Parisian. An absolute favorite with locals and tourists alike is the Jardin Luxembourg, located in the centre of Paris in the 6th arrondissement. The gardens are a great place to escape from the hustle and bustle of the city for a few hours, with the opportunity to play chess, tennis, bridge, remote control boats, or if you have kids, a regular puppet show and a good play area. But there are gardens scattered all over the city, so head to a bakery, grab yourself some fresh bread, some cheese and wine, and enjoy strolling around the greener side of the city.

Located in the 4th arrondissement, the Centre Pompidou is the largest museum for modern art in Europe. It’s unique 20th Century architecture and cutting-edge exhibitions make it a stark, modern contrast to much of the rest of the city. Whilst many criticised it’s image as an eyesore since it’s inauguration in 1977, the centre has firmly embedded itself in Paris’ artistic scene. It hosts a range of exhibitions, so check out what’s happening when you’re there, but there’s guaranteed to be something for you.

Famous home of the Phantom of the Opera, the Palais Garnier is the opulent opera house designed in 1860 by Charles Garnier. The beautiful architecture is some of the most spectacular in Paris, with the red velvet seats and massive chandeliers, the auditorium was designed for the audience to be part of the opera experience. You can claim yourself a spot on the guided tour (although you only have access to the backstage areas in a guided tour), or grab an audio-guide available for 5 euros. Standing on the Grand Staircase is a surreal moment, and will certainly make you want to burst into a rendition of the Phantom of the Opera.

No list of places to see in Paris is complete without the Louvre. Although the queues can be huge, with waits up to three hours, what it houses has no comparison. And if you’re under 26, you’ll get in for free, as is the case with many Parisian attractions. Most people head straight for the Mona Lisa, which is, of course, a masterpiece. But don’t give that all of your attention. The museum hosts so many amazing pieces, with my personal favorite Liberty Leading the People, painted by Eugene Delacroix, which commemorates the July Revolution of 1830. But the museum is so personal, you can find your own favorite after hours of wandering.

One of the darker parts of the city, the Paris Catacombs offers a chilling insight into the underworld of the City of Light. A labyrinth under the city, the catacombs were installed in the tunnels of former quarries, they began when eighteenth-century public health problems linked with cemeteries led to the decision to move their contents to an underground site. They were eventually opened to the public by appointment in 1809, and now see 550,000 visitors a year. With tickets at only 13 euros, you can explore the maze of the remains of several million Parisians. Tours last at around 45 minutes, and bear in mind that you are underground, so it can get a little cold and some tunnels can get narrow, so perhaps avoid this attraction if you suffer from claustrophobia. It’s the perfect place to embrace the spookier side of the city.

My personal favorite spot in Paris, the bookshop encompasses the literary history of the city, and even made me emotional as I walked in. Located near the Notre Dame, the bookshop opened in 1951 by George Whitman and became a meeting point for writers and readers across the decades. The shop was a gathering place for some of the 20th Century’s finest writers, including F. Scott Fitzgerald, James Joyce and Ernst Hemingway, as well as leading French writers. The bookshop is split into French and English, so you can pick up a copy in your preferred language. The inside of the store is beautiful, piled high with copies of classics, but photographs aren’t permitted so you’ll have to make do with the memories.

There is something special about Paris that is difficult to define, but will stay with you long after you leave. The history, the romance, the food. The city gets under your skin, and leaves you wanting to explore everything that it has to offer. And it has so much to offer. Whether you’re interested in art, history, literature, food, or just about anything else, Paris has something for you. With all this in mind, know that you can step off the plane and find yourself in such an awe-inspiring city.