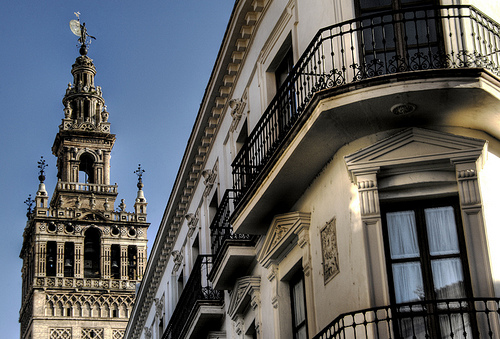 SEVILLE, SPAIN. If you’re planning to spend at least a few months, or even a few weeks in Spain, you are inevitably going to make your Spanish pilgrimage to Seville, the capital of Andalucía and the fourth-largest Spanish city after Madrid, Barcelona and Valencia. You’ll most likely want to hit up all the major sites, like the Alcázar, the Cathedral and las Setas. These are all important and necessary; however, there are some other areas of Seville that you might not be able to find so easily  in your guidebook:

General Archives of the Indies – Currently, there is an exhibition entitled “Spain and the Adventures of the South Sea” about Spain’s conquest of Latin America with fascinating artifacts and a particularly engaging exhibition construction. Easy to follow, and with translations in both Spanish and English, the exhibit provides a perfect respite from the hot Andalucían sun that you will experience. Located right next to the main Cathedral in Seville, the building is often mistaken for part of the university or an official government building. Despite this exterior, the General Archives constantly have different exhibits and offer the public historical analysis of a variety of issues, often relating to Spanish colonial history. Built in 1785, the building itself is a site to see and at least stop at, but I would highly recommend perusing whatever exhibit the archives have — which are free to the public!

Check out more information about the museum here.

In addition to the National Archives, I would also recommend that you experience the Estadio de la Cartuja (also called “Estadio Olímpico de Sevilla”) just a few bus stops away from the city center, where you will probably be spending most of your time. The stadium was built when Seville was a competitor for the summer Olympics in 2004 and 2008. When Seville lost the bid for the Olympics, the government decided to use the stadium for entertainment purposes. The two major Sevillian soccer teams, Real Betis and Sevilla, kept using their own stadiums, and the stadium is used mainly for concerts and other activities. Headliners such as Madonna in 2008 and Irish rock band U2 in 2010 performed at the stadium, but there are constant listings for concerts and other company’s activities. I recently attended a concert sponsored by the University of Seville, in which a number of different Spanish bands played. It was, for lack of a better description, an enclosed, small-scale version of the Governor’s Ball in New York City. The acts turned less into rock and more into a dance party as the night progressed, but the stadium is a clean, conducive environment for entertainment (the sound travels really well there!).

To get a good overview of the goings-on at the stadium, check out more information here.