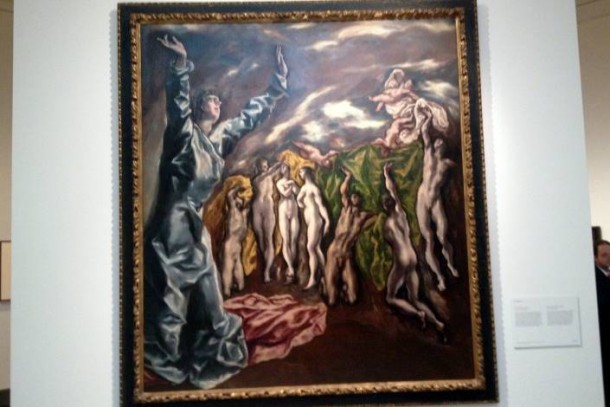 MADRID, SPAIN. Today marks the opening of the new exhibition at El Prado, a 105 piece collection entitled El Greco and Modern Painting, which coincides with the 400th anniversary of El Greco’s death. It is the first collection to combine 26 of El Greco’s paintings and sculptors with the works of late 19th to 20th century artists, presenting his astounding influence over many of the most famous modern artists such as Picasso, Cézanne and Modigliani.

The exhibition is split into eight sections, each appreciating the different artistic movements on which he had an influence, as well as tracing the evolution of his work throughout his life and career as an artist.

It is clear that El Greco influenced other artists in a number of ways. The structure of certain pieces is frequently recreated, sometimes in obvious homage and sometimes more subtly. One of El Greco’s most famous paintings ‘Man with his Hand on his Breast’ has been imitated countless times throughout many different artistic periods. For example, Ramón Pichot painted his friend and contemporary Santiago Rusiñol in the same pose as the original in honour of El Greco and his work.

Many artists pay tribute to El Greco through mentions of him in within the piece rather than reflecting his own work. Zuloaga, a late 19th century Basque artist, painted Maurice Barrès, the author of El Greco or the Secret of Toledo, holding said book whilst looking out over the city of Toledo. Whilst some artists may not imitate his work in style or structure, it is evident that his presence as an artist was respected and admired for centuries after his death.

Having said this, El Greco’s style has certainly been adopted by many prolific artists. One stylistic feature that characterized his work throughout his career was his tendency to elongate figures and body parts to an almost gauntly extent. Whilst this can be recognised in the gesticulation of Saint Peter and Saint Paul, it is exaggerated in Picasso’s The Frugal Meal. Later on in the exhibition, this distinctive style becomes more distinguished, particularly in The Vision of Saint John. Having seen Picasso’s previous adaptation of El Greco’s style, one cannot help but to draw comparisons between this piece and the famous Demoiselles d’Avignon, through the positioning and almost grotesque detail of the nude female bodies.

It is through artists such as Picasso that we see the extent of El Greco’s influence, as the boundaries of form and style do not limit artists from using his work to create new aesthetics and methods of art. Returning to ‘Man with his Hand on his Breast’, it is noteworthy that the most recent adaptation of this piece can be found at the end of the exhibition; ‘Man’ by Picasso. Whilst it is a clear representation of the original painting, it could not be more different. It is not necessarily the aesthetic of his works that has influenced so many great artists, but his bold attempt to create something original at the time in which he was painting.

El Greco was disregarded during his lifetime for being peculiar and controversial, as his artwork did not reflect the traditional baroque style and he painted many of his subjects (including religious figures) in an unnatural way. It is thanks to these artists’ reproductions, adaptations and commemorations of El Greco’s work, that his work has touched countless artistic movements and that his legacy has become timeless.