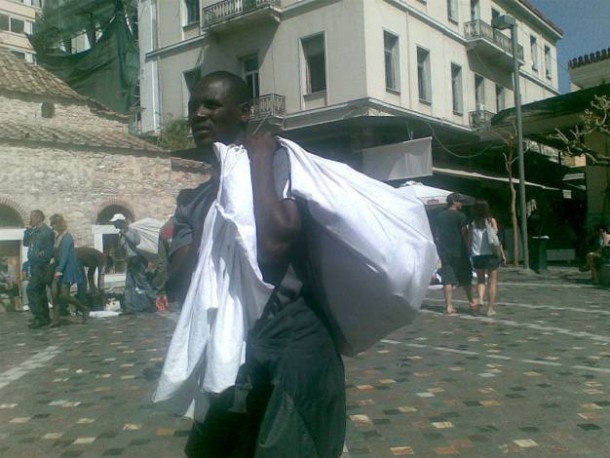 An immigrant selling stuff in the Monastiraki neighborhood of Athens with its famous Flea Market, Greece

GREECE. Greece’s issues with undocumented immigrants, once again, have attracted worldwide attention. On May 5th, 2014, Greece was affected by a tragic event where 22 migrants died and at least 10 went missing after two boats capsized off the Greek Island of Samos.

Fatal accidents are frequent, as many migrants risk their lives crossing from Turkey in search of a better life on Hellenic land. The most popular Turkey-to-Greece route used by migrant smugglers is also the shortest; just a few kilometres off of Lesbos Island from the coast of Turkey, which puts an excessive pressure on Greece’s sea borders.

Due to the 2011 Arab Spring’s negative impact regarding political persecution, fear of violent protests and lack of political and social stability, most migrants have chosen Greece as their savior. According to Annual Risk Analysis 2014 dates of Frontex, by the EU’s border management agency, illegal crossings at the Greek border by undocumented migrants and asylum seekers from Africa and Asia through Eastern Mediterranean route of Greece, Bulgaria and Cyprus dropped in 2013 by 33%. The land border of the Greek-Turkish route ranked second in 2013 with nearly a quarter of all illegal border crossings in the EU after Greece took stronger measures of surveillance and has built a 12-km fence connected to Turkey, as Frontex showed.

However, even with the new fence, discouraging figures from the Greek Coast Guard revealed in May 2014 that the number of immigrants to Greece jumped to 142% in the first four months of 2014 than in the same period last year. These waves of immigration have created echoes of the civil society. Anti-immigration feelings are getting stronger in Greece fueled by a high unemployment rate of 26.5% in February 2014 during the period economic instability, as official figures have shown.

On the other hand, UN Special Rapporteur on the human rights of migrants François Crépeau advised the European Union on April 2013, after his visit to Greece saying, “to improve the conditions of migrants, such as the First Reception Service and Asylum Service, rather than building more detention centers” and to support civil society organizations projects in order to assist immigrants, regardless their status. Refugees and immigrants are treated differently under international law. An immigrant is a person who chooses to move from one country to another in order to improve his or her economic well-being, while an asylum seeker is a person who says “feared to be persecuted for reasons of race, religion, nationality, membership of a particular social group, or political opinion” back home,as stated by UN 1951 Refugee Convention.

An asylum seeker’s claim is only granted after refugee status has been successfully evaluated by a judge of the host country.The European Union offers a complementary protection for people who, “without being refugees, are exposed, if returned to their countries of origin, to death penalty, torture or other inhuman or degrading treatments” through its 2005 EU Qualification Directive. Under Dublin Regulation, which is the core principle for handling asylum claims in the EU, the state that the person first entered is responsible for handling the application for asylum seekers; most of the time but not always as in many cases immigrants want to reunite with relatives.

States have the last word in deciding who needs international protection and have the power to deport the others to their countries of origin. Greek Ministry of Public Order showed on April 2014 that 633 more immigrants were repatriated to their native countries, in March this year. The number of immigrants sent from Greece to their countries of origin has risen since August 2012 to a total of 41.510 deported immigrants. Nikos Dendias, the Minister of Public Order, said about 100.000 illegal immigrants will be returning to their countries by 2015, during his speech on “Saftey challenge in 21th Century Greece”, at Rotary Club of Athinai, on June 3th, 2014. Dendias also stated Greek borders will be shielded with electronic monitoring tools as new measures for preventing illegal immigration. Frontex indicated that illegal stay in Greece decreased by 41% between 2012 and 2013.

Undocumented immigrants’ and asylum seekers’ issues are hot points on Greek officials’ agenda that have repeatedly called for the European Union’s help. How European Commission reacted to Greece’s and to United Nations’ demands and what solutions does EU institution have to Greece’s immigration issues are inevitable questions. Concerning if the allocation for Greece’s external borders of €44.033.646 and refugee fund of €3.163.323 given by European Commission last year were fully used to meet program goals is also subject for inquiry. ROOSTERGNN asked the European Commission all these questions. The institution has officially answered:

“The Commission is aware and concerned about the situation of migrants in Greece. The Commission initiated infringement proceedings against Greece in 2009 setting out concerns about various issues including the question of access to the asylum procedure at the border areas. The infringement also includes concerns about the treatment of asylum seeking unaccompanied minors, the reception conditions available in detention facilities holding migrants and the procedures which Greece has in place for assessing asylum claims.

In the meantime, the Commission has been supporting Greece to reform its asylum and migration policies. A number of positive results have been achieved such as the establishment of the new asylum service, independent from the police, and the establishment of the First Reception Service mandated to screen and provide assistance to migrants arriving at border areas. Moreover, a number of detention facilities which were considered inappropriate to hold migrants, were recently closed down.

Regarding the spending of the funding, the evaluation has not yet been made so it is still too early to assess.”