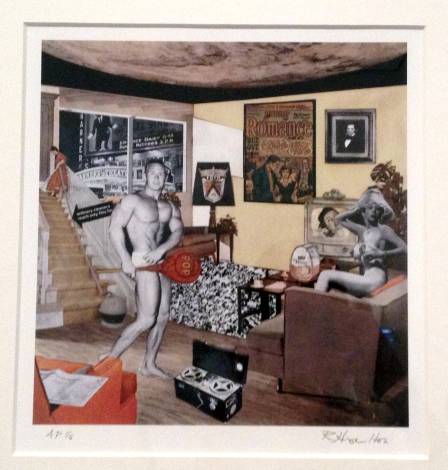 Was Richard Hamilton the Founder of Pop-Art?

Whilst ‘Pop-Art Myths’ exhibited some of the most famous pieces to date such as Lichtenstein’s Mickey Mouse and Warhol’s Marilyn, the lifetime’s work of Richard Hamilton goes far beyond the common interpretations of this style. Divided into 14 zones, the exhibition covers every artistic aspect of Hamilton’s career and presents his progression through style and form in chronological order.

Hamilton is often referred to as the ‘Founder of Pop-Art’ thanks to his famous collage ‘Just what is it that makes today’s homes so different, so appealing?’ which he created in 1956.

This was the start of a new style for Hamilton, and indeed many other contemporary artists. This particular piece can be seen as an amalgam of his various passions, for example his interest in design and interior spaces, the role of the media and television in people’s lives, and the high impact of product branding, all of which would later on feature separately and more heavily in his work.

Zone 10 of the exhibition concentrates on ‘Products’, in particular the brand Braun. In many pieces, the Braun logo is replaced by Hamilton, keeping the same character size and font; so that only upon careful inspection does the viewer notice the difference. Another selection shows Braun toaster machines made of mirrors with varying kitchen or household backgrounds. The glaring mirrored surfaces distract the viewer from the background with an image of their own face, perhaps suggesting the narcissist nature of consumerism today.

Whilst much of the Product series seems light hearted, ‘Fashion-Plate’ attacks the world of consumer goods and advertising with more heavy criticism. The series is a collection of portraits of models that have been ‘retouched’ with make-up, paint and other materials. The result is a grotesque manipulation of the original glamorous image, which criticises the appreciation for artificial beauty and the use of digital re-touching in today’s magazines and advertisements.

The manipulation of different materials and mediums is a key aspect of Hamilton’s work. His collage projects such as ‘Fashion-Plate’ explore ways of editing an original image by adding different materials to create a completely new dynamic, but his later works go even further.

In the ‘Shit & Flowers’ series, Hamilton paints an advert for ‘Andrex’; women relieving themselves in the open air, ironically surrounded by idyllic nature and flowers. Whilst the message is clearly provocative, intending to slate both the euphemistic discretion of advertising and the over sentimentality of painting, what is more interesting is the form of the painting. Using different colours and techniques, Hamilton distorts the image as far from the original as possible. Whilst the small roll of Andrex is still just about visible, he shows the viewer how look at things differently.

With over 250 works produced between 1949 and 2011, this exhibition presents one of the most influential British artists of the twentieth century. Richard Hamilton single-handedly combined popular and ‘high’ art by exploring and developing the innumerable means of visual expression.