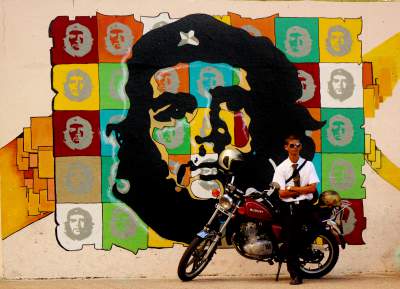 CUBA. Cuba’s capital city Havana welcomes me with the shrill sound of a beggar clattering his jar filled with a few coins. The hot sun burns on his leather-like skin. His clothes are ripped and soiled. When a tourist approaches him, slightly hesitating, and tosses a coin in his jar, he reveals a smile –both toothless and joyless. Without making any eye contact he shuffles further, poking people to ask for some financial support. Most of the time it is in vain. The beggar’s miserable situation seems miles away from the Cuban utopia in which everyone is equal and neither rich nor poor exists. Yet, the streets of Havana are home to a growing amount of mendicants. When I ask the citizens of who the beggars are, they shrug indifferently. “Just addicts that want to live on the streets. It’s their own choice”, is Maria’s (44) explanation. But the reality is more complicated: Cuba is in the midst of a political transition that gradually gives them more freedom, but that also increases the gap between rich and poor that Castro’s regime condemns so strongly.

The Soviet Union falls For a long time, time seemed to stand still in Cuba. While the world was rapidly modernizing and digitalizing, the Cuban lifestyle seemed stuck in the 50s. Old timers dominated the streets and large scale supermarkets were non-existing. According to communistic ideals, companies were owned by the state and the only advertisement to be found was propaganda for Fidel Castro’s regime. Trade with the outside world was limited, but there were no shortages thanks to the support of the Soviet Union. Cars, oil, canned meat, movies: it was all provided by the Russians. That all changed when the SU fell in 1991. Cuba’s most important source of import and export disappeared and a deep economic crisis followed. During the ‘special period’ – as the economic misery is subtlety referred to by the regime – the state was forced to cut its expenses. Food provision was decreased, hours of waiting for a soy burger became part of day-to-day reality and electricity was only available a few hours a day. But it wasn’t enough. Without the support of the SU, the country was unable to provide for its citizens and the only way to avoid a public upraise was economic and political change. And thus, Castro’s regime was forced to gradually grant its citizens more freedom. Little by little, mobile phones and internet were legalized and the housing market was opened up so that people can now buy and sell houses.

Historical change One of the biggest changes was the acceptation of private companies. The state has set up a list of 201 occupations that can be conducted independently, such as hair dresser and plumber. It means that, for the first time since 1956, one’s income is not fixed by the regime but dependent on one’s job and success. This has brought a historical change for some. Yet, not much has changed for many others. Those who earn a state salary, earn as little as they always did – about 20$ on average. At the same time they are facing an income gap that is not only growing, but that also appears unnatural. A taxi driver, for instance, earns more than a doctor. After all, taxi companies are private and make relatively good money thanks to the thriving tourist industry. They earn CUC’s, worth 25 times more than the CUP’s that government workers get paid. Doctors on the other hand work for the state and earn a fixed salary in CUP, equally low for all government workers – baker, police man or medical expert. The list of allowed private businesses is short and rushes many people into starting up similar businesses. Consequently the streets of Havana are filled to the brim with nail salons and guesthouses that often have difficulties not to go bankrupt due to an overwhelming amount of competition. At the same time, the list forces people into the black market if their profession does not appear on it. This is the situation Ivan (23) is in. He is tattoo-artist, but forced to do his work secretly. Tattooing is not a legal business after all. For all the state knows, Ivan is a sculptor. He conducts his business in the living room of a friend’s place ; no sign outside, because the government cannot know.

Worse than capitalism? Cuban’s economic transition away from communism is not only caused by internal changes, but also by the foreign investment that is allowed as a result of a law that was passed in 1994. In an attempt not to ‘sell’ the country to capitalism, at least 51% of the interest needs to be in the hands of a Cuban party. Still, the foreign influences appear slowly but surely, especially in the increasing range of goods that used to be absent and that are now widely available, such as ice cream and Coca Cola. It may seem an improvement, but only few benefit from the new supply. The meagre state salaries of 20$ a month make it hard, if not impossible, to buy the Western goods that are sold for European prices, especially for those who work for the state and earn CUP’s. Thus, most of the goods are sold to tourists and those who work with them, while a large percentage of Cubans stay behind. Milagros (32): “ It’s nice that we are getting the right to buy more, but before I can spend more, I need to earn more. Nothing changes.” The only way to earn more is by starting up a private business – a privilege that’s not for everyone. As long as people work for the state, they have no chances to increase their wages. In an economy that is communistic for most, but has capitalistic opportunities for some, there is not only an unequal division of income, but of chances too. Ironically, Cuba’s attempts to protect equality leads to an inequality growth that may be even faster than in the capitalistic world that Castro’s regime denounces. In a semi-communistic world, people may be even worse off than in capitalism.