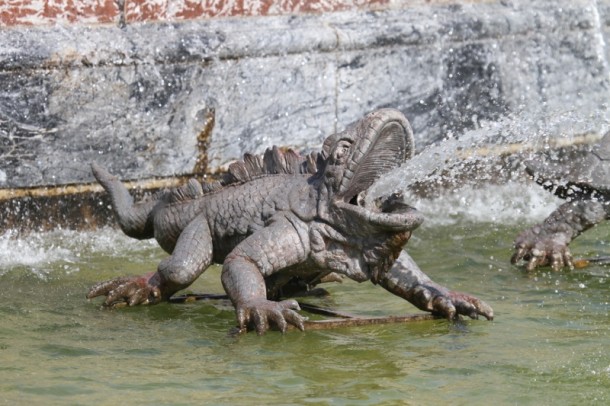 HERRENCHIEMSEE, GERMANY.Herrenchiemsee was acquired at a consortium of Württemberg timber speculators in 1873 by King Ludwig II, upon which he built the Herrenchiemsee Palace, using Versailles as a basis. Below the water parterre, a staircase leads to the Oval Fountain of Latona, where this gargoyle is found. Leto is a figure from Greek mythology; she was the daughter of the Titans Coeus and Phoebe. Leto was a mistress of Zeus, which begat her twins Artemis and Apollo. The Roman goddess Latona was later equated to her. Out of jealousy, Hera tried to prevent her birth, as Gaia, Hera’s grandmother, had previously told her that the future children of Leto and Zeus would be bigger and more powerful than their own. In the Palace of Versailles there is also a Latona Fountain, which was probably the basis for the one at Herrenchiemsee.

Do you have a photograph that could be published in our POSTCARD FROM … series? Register at rgnn.org/register and upload your own!