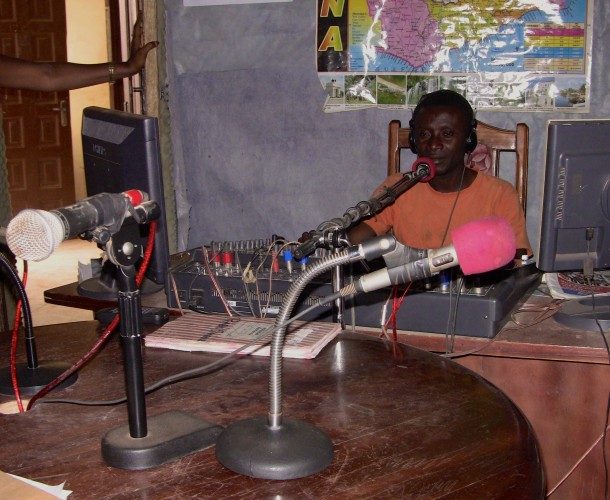 Taking Radio to the People in Ghana

ACCRA, GHANA. A battle resonates through Ghana’s air waves, and Akua Ansah Eshon, 63, prepares for the familiar fight. Armed with a frequency application in one hand and a microphone in the other, Eshon advocates for the rights of community radio stations.

“The radio is our means of education. But when you muffle people, when they don’t have a voice, they will accept whatever is given to them,”she said.

Radio is the widest reaching media outlet in Ghana, with 89 percent of the population tuning in on a daily basis. It has the unique advantage of being accessible through low-cost, transportable devices, and once plugged in, listening is free.

While radio listenership is declining in the United States, business is booming across Ghana. Similar to NPR, community radio stations are non-profit, run “by the people, for the people” and focus on news and cultural development. Because they broadcast solely in Ghanian languages and create programs based on local needs, they’ve become an essential tool for educating rural areas.

According to the 2010 census, 46 percent of the Ghanian population is literate in both English and a local language. As the national language, most urban radio stations broadcast in English, yet there are over 75 local languages spoken in Ghana.

For the past four years, Eshon has campaigned for frequencies for Radio Jomoro and Radio Koyele, two prospective community stations in the rural north. But Eshon says the National Communications Authority (NCA), responsible for frequency licensing in Ghana, is sidelining those already marginalized.

“NCA keeps on giving us all kinds of excuses while they rather go ahead and register the commercial radios because that makes them more money,”said Eshon. “It’s so annoying and it’s not that transparent.”

After broadcasting shifted from a state-owned monopoly to a liberal press in 1992, media houses began to multiply and eventually outpaced regulatory policies. With over 281 radio stations in operation today and over 500 pending applications at the NCA, there is immense competition for funds, and even then, it is difficult to ensure survival.

Assistant Manager of Engineering at the NCA, Peter Djakwah said, “It costs more money regulating broadcast than we get from it because more people aren’t paying their fees on time. It’s really a challenge.”

Yet in spite of their challenges, community radio stations that receive authorization are proving prosperous across Ghana.

Assistant Director at the National Media Commission, Paula Sanzim, 40, says people persevere because of the sheer power of radio. “If you go to the remotest parts of the developing world, you will find people with radio. And once they are speaking their own language, they are glued to it. They are able to understand you. They are able to use it to move you.”

Ghana’s first community radio station, Radio Ada, was established in 1995 to serve surrounding farming and fishing communities. Today, it’s become the model for how giving a voice to the voiceless ensures national development at a community level.

Broadcasting solely in the Dangme language, Radio Ada reaches 600,000 people of whom 65 percent are non-literate. Station Manager Isaac Djagbletey has witnessed a growth in jobs, literacy and culture since the radio’s arrival.

“When we started Radio Ada, the Dangme language was almost dead. Now everyone’s speaking it. Our folklore music and community histories were almost lost, but today, we know we have our history back and that is what matters,”said the 56-year-old. “It’s lifting the culture of the people up.”

The station’s advice program has played a key role in facilitating natural resource management and conflict resolution in the community. When cattle were destroying family farms, Radio Ada aired a program on proper animal housing. When domestic violence was on the rise, they facilitated discussions on communication and respect between husbands and wives.

Fishmonger, Hogba Yo, who appears around 60, said listening to Radio Ada taught her better ways of smoking and preserving fish.

“At first we use the sticks to smoke the fish, but through the education we got to know the side effects on fish smoking, what the harm it does to us. We learned a lot of things from Radio Ada and what we have on our minds too, we let them know about it,”said Yo, through a translator. 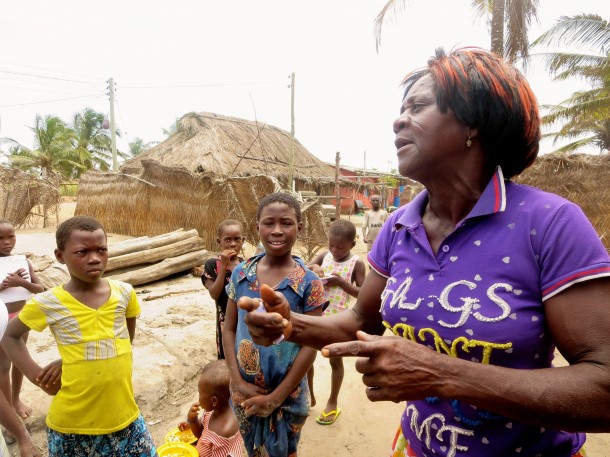 Following a bottom-up model, Radio Ada’s programs are dictated by the people. Djagbletey and his team regularly visit surrounding areas to guarantee programs are aligned with community needs.

“Radio Ada does so many things off microphone because we take the radio to the people,” he said.

The station’s ability to transform lives has proven two-fold.

“If I were to be in the classroom I would have taught 30 people, but look at the number of people who are listening to me. Look at the impact. I sit in that small box over there, and the people hear. I’m improving on my own life, and as I do, the community is also improving.”

With Ada as a trailblazer, community radio stations are growing across Ghana, despite the lagging authorization process.

Kofi Baofo, 27, sanitation officer in Pokuase said, “Because of the nature of my work, I do listen, so I can get information about sanitation. We encourage them because we work hand in hand.”

But Radio Emashie shares in the struggles that are straining community radios. Underfunded and understaffed, the station shares a compact space with three other businesses. Without a generator, Emashie will go days off-air because of the power shortage in Ghana.

“We are like a family, so we don’t want to think much about that negative. We love what we are doing. We sometimes are struggling, but we are happy,”she said.

Both Radio Ada and Radio Emashie are part of the Ghana Community Radio Network (GCRN), an association of non-profit, non-partisan and non-sectarian radio stations, aimed at enabling marginalized groups to strengthen their communities.

“Go outside Accra and see what communities are going through. Those that don’t have electricity, water, schools, books, they don’t have basic needs. We say, ‘let the voice of the rural person be heard where it needs to be heard,’”said GCRN Programming Support Assistant Harrison Matti.

“The absence of the broadcasting law has allowed all of these problems to compound,”said Matti, 27. “It’s a threat to our development and our democracy and the real understanding of a community radio station.”

“If there is one major thing about the development of community radio in Ghana, the first has to do with the NCA’s refusal and consistent wickedness towards communities. Making communities wait two, four, six years before we are granted broadcast frequencies,”said Kofi Pang Larweh, lead trainer at GCRN.

Serving perhaps the most rural area of the country, Radio Afram Plains waited nine years to gain frequency. Located six hours outside Accra, accessible only by a ferry from the east or a long bus ride from the west, people relied on drumming, chiefs’meetings and word of mouth before the station’s establishment. Now they are looking to expand but lack the necessary funds for equipment and maintenance.

Professor Audrey Gadzekpo, 53, who teaches in the communications department at the University of Ghana, Legon, believes the entire nation can benefit from community radio stations.

A Look to the Future:

But Larweh and the rest of the GCRN are confident that hope is on the horizon.

“All the things that government is not able to do, community radio is taking the people to do things for themselves. And so for us it is about showing our identity, who we are, what we are capable of doing on our own,”he said.

In August 2015, GCRN will host more than 500 stakeholders from over 110 countries for the World Association of Community Radio Broadcasters’ Global Conference. Larweh anticipates it will bring international solidarity necessary to overcome the obstacles hindering community radio stations from thriving across Africa.

“It is the community radio that is bringing people back into focus. It says, ‘You are a human being. You belong. You have value. You are part of Ghana, and Ghana is part of the body politic of the world.’”