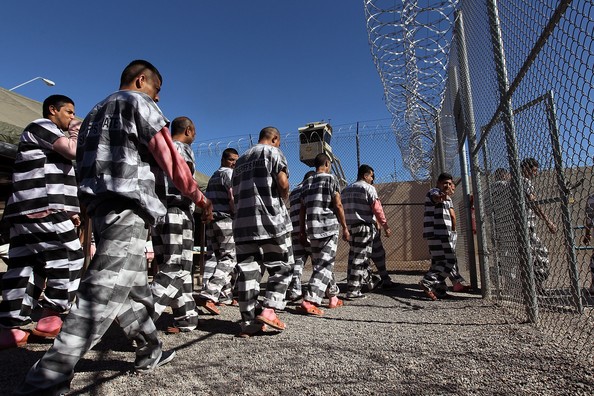 Cash Cows: The Exploitation of Undocumented Persons by For-Profit Prisons

U.S.A. On April 23, 2010 Arizona Governor Jan Brewer signed Arizona’s Senate Bill 1070, also known as the “Support Our Law Enforcement and Safe Neighborhoods Act”, into law. Almost immediately after this, SB 1070 soared to the center of the American media and political consciousness. SB 1070 received criticism both nationally and internationally for its ruthless anti-immigration content as well as alleged discrimination against Latino/Hispanic American citizens.

Arizona’s SB 1070 immediately became controversial because it gave law enforcement the power to stop and question individuals based on only personal assumptions on a person’s citizenship status. This forced an individual “to prove” his or her citizenship to law enforcement. Critics held that this opened the door to racial profiling and police harassment of American citizens of Latino/Hispanic descent. The law also introduced harsher penalties against those found to be in the United States illegally and against those who were found to be assisting in harboring, sheltering, and hiring undocumented persons. The law spurred similar proposed laws in other states authorizing law enforcers to profile, stop, and harass people perceived to be “foreign”.

The reasons given for implementing SB 1070 into legislation were the usual conservative monikers for persecuting undocumented persons, such as the protection of American jobs, lowering crime rates, preventing drug trafficking, and averting the exhaustion of government services on people living in the country illegally. Whether or not these reasons are legitimate, other more corporate incentives to implement this law were not promoted to the Arizona and American public to gain support for the measure. Some of the biggest proponents of Arizona’s SB 1070 and any other anti-immigration measures which could potentially land some “illegals” in jail are private prison contractors and lobbyists. This includes a man named Chuck Coughlin who served as Arizona Governor Jan Brewer’s campaign manager and policy advisor. Coughlin also happens to be a head lobbyist for Corrections Corporation of America- the largest private for-profit prison contractor in the United States. A host of other corporate sponsors including Jan Brewer’s spokesman Paul Senseman (also a lobbyist for a private prison corporation), private prison investors/contractors/lobbyists, and corporate linked politicians were also found to be behind Arizona’s SB 1070.

“According to Corrections Corporation of America reports reviewed by NPR, executives believe immigrant detention is their next big market. Last year, they wrote that they expect to bring in “a significant portion of our revenues” from Immigration and Customs Enforcement, the agency that detains illegal immigrants.”

Arizona’s SB 1070, in essence, is an exploitative act of legislation that allows private prisons in Arizona to arrest, imprison, and detain undocumented persons to keep their prison facilities full. Private prisons earn money from the state based on how many prisoners inhabit their facilities so an opportunity to exploit undocumented persons who have no rights or power in politics or the law is the perfect way to stay in business and expand revenues. While the SB 1070 act is a genius business ploy it is also a discriminatory, abusive, and unethical piece of legislation that allows humans beings to be imprisoned as “cash cows” for prison corporations in the state of Arizona.