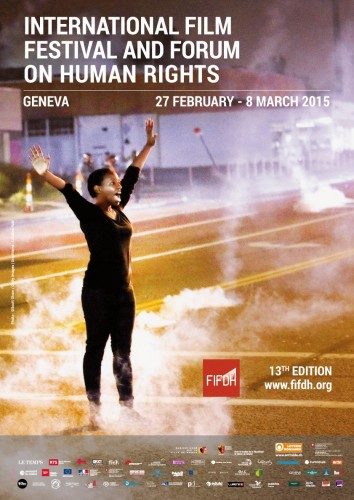 Geneva, Switzerland. The Human Rights Film Festival (FIFDH) 13th edition, 27.02 – 08.03.2015, brings together filmmakers from all over the world, journalists, politicians and human rights activists in an intense ten days festival.

This year’s edition pays tribute to Razan Zaitouneh , recipient of the Sakharov prize for freedom of thought in 2011 and The International Woman of Courage Award in 2013, who disappeared in 2013 and to Ilham Tothi, an economist and law professor from the Uyghur minority who has been incarcerated since 2014 in response to his criticism to the Chinese government and despite the denunciation of the verdict by European Union, Amnesty International and Human Rights Watch.

The festival opened with the film Caricaturistes : Fantassins de la démocratie, a tribute to Charlie Hebdo and the debate Nestlé in Pakistan : The Baby Formula Scandal exposed.

The program  of the festival presents screenings of 44 films including 8 international premiers and 6 avant-premiers. The films cover a large variety of topics, from war zones to personal tragedies, from dictatorships to freedom of press, from the extreme right fascist measures against immigrants to extreme left communist measures, from religious oppression to political persecution.

15 debates will be broadcasted worldwide and will be exploring topics like the Ebola epidemic, the LGBT situation in Russia, the Israel-Palestine conflict, cyber-surveillance, whistle-blowers and women activists, to name but a few. There will be 160 speakers, including world recognized experts in human rights, political figures, highly acclaimed artists, human activists and journalists.

The festival features an educational programme and 7 exhibits, one of which is an homage to Charlie Hebdo.

Last year’s edition of the festival reached a record attendance of more than 25.000 people. It presented more than 40 films projections and had 17 debates and 150 speakers.

As general director, Isabelle Gattiker states in her illuminating message about the importance of the festival, the importance of showing films, debating their themes, gathering people and collaborating: “during the coming days, darkness will only last a few seconds, those magic seconds between the screening starts.”

TURN ON THE LIGHTS!