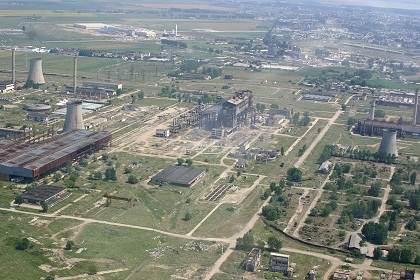 The Calarasi steel plant after the communist era, Romania

ROMANIA. After the fall of the single-party communist regime in 1989, over 6000 people were dismissed from their jobs at Siderca Călărași (now referred to as Călărași steel work). The Romanian steel-making factory was inaugurated in 1979 close to the Borcea branch of Danube covering 6,500,000 square meters. Nicolae Ceaușescu, General Secretary of the Communist Party from 1965 to 1989, cost the country over $100 million in foreign loans for this one project. By the end of his political era, Ceaușescu had spent these loans along with an additional funding of $1.8 billion. The factory was among Southeast Europe’s largest suppliers for railway tracks and generated 200,000 tons of steel annually. Following the collapse of the Soviet Union, Romania experienced political changes toward democratization. Such changes caused a dramatic financial shift in the country´s supply-marketing relations.

Negotiations with ex-Soviet states were conducted regarding the rapidly rising prices of iron ore. During this era, the factory was privatized into various parts, costing the Romanian Government $130 million between two installments. The work was divvied up between four companies: Sidertrans, Martifer, Donalam and Donasid (the only company of the four that is still active today). 51% of the Donasid shares were sold to an Italian company, Beltrame, that had to be invested 20 million euros but went on to sell the shares to a Luxembourg-based company, Tenaris, for 37 million euros.

Many complained of the lengthy series of illegal actions that occurred during the privatization of the Calarasi steel plant due to its slow democratic transition and passive attitude toward authorities. Gradually, most of the assets accounting for more than 600,000 tons of metal used in construction were chopped down and sold as scrap metal. Currently, multinational groups own many of the country´s viable steel factories. Arcelor Mittal, Invest Nikarom, TMK and Tenaris are a few of the key players operating in the Romanian steel market.