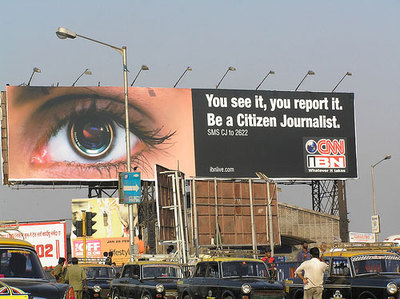 Citizens Against Shock and Awe

When in 1991 civilian George Holliday  used his new video camera to record police officers beating up the unarmed Robert King and sold the video to the media, citizens started to realize their power in confronting authorities and the active role that they could play in denouncing abuses in the society.

From that time the advent of new technologies, social networking and media sharing websites have enabled an increasingly large number of people to collect, report and disseminate news and information. Nowadays everyone is in principle capable of being a media outlet and this is sure to cause deep changes in traditional forms of journalism.

The rise of citizens actively involved in  gathering and publishing media content, a phenomenon  known as citizen journalism, has allowed a steadily growing number of people around the world to make their voices heard and to act as eyes and ears in places and at events where traditional forms of media fail to appear.

In Western society, the rise of citizen journalism has played a vitally important role in publicizing and denouncing abuses by authorities against protesters. During the G20 convention in London in 2009, and more recently during the riots caused by police violence toward blacks in Ferguson, media content such as photos and videos produced by individuals have provided undeniable  proof of abusive and criminal acts, rendering official investigations inevitable.

Traditional forms of media, broadcasts and  newspapers such as the BBC, the Guardian and CNN have recognized the importance of crowdsourcing and feature a platform on their websites for collecting such information from citizens.

But whereas in Western countries citizen journalism operates as an extension of traditional forms of journalism, in countries characterized by an oppressive regimes blogs and social networks have become a unique way for distributing information.

After the Arab Spring that started in Tunisia in 2010 and subsequently set in fire the entire Middle East, journalists have to face the difficulties of reporting in regimes where censorship is absolute. International journalists are either unable to enter the countries, or run an extraordinarily high risk of being imprisoned or killed. According to research by the Committee to Protect Journalists (CPJ), 61 journalists were killed in 2014 and 25 so far this year.

Countries like Syria and Iraq were left with a media vacuum that could only be filled by the citizens themselves. Only they, unable to escape, were able to report the atrocities that were committed in these countries.

In Egypt, political censorship caused a rise in the numbers of bloggers who started covering the 2009 uprisings. In an interview with Michael Buerk for the BBc World Service Egyptian bloggers stress how blogging in a political oppressive regime is important, not as a means to start a revolution but to educate the citizens in the hope of creating a better society.

Besides educating the blogger’s countrymen people, blogs can also fulfil the function of showing the events in the Middle East from an inside perspective that our own media cannot offer, due to a general ignorance of the Arabic languages, lack of empathy or cultural obstacles.

In the wake of population uprisings, some countries have made laws blocking citizen media and user-generated content. A clear example has been Saudi Arabia with the introduction of the Anti-Cyber Crime Law and Egypt with the establishment of the 2014 constitution that provides regulations for online journalism. As a consequence of these changes bloggers and citizens journalists have routinely been imprisoned for committing what is categorized as ‘anti-state crimes’.

As a counterweight to governments establishing laws in order to stave off bloggers, associations such as the International Center for Journalists have created trainings for citizens to encourage them to play an active role in reporting. These days citizen journalism is transforming from being a pure individual action to acting individually within an organizational framework offering, among other tools, websites where everyone is allowed to publish their news.

In Syria, after the oppressive regime instituted by the Islamic State of Iraq and Syria had killed numerous journalists, a group of citizen media called Raqqa is being Slaughtered Silently (RSS) has been the only testimony left of life in Raqqa. The group reports videos, photos and stories exposing ISIS crimes. Some of its  members have already been targeted with house raids, kidnapped, and one of them assassinated and attempts to track more members are still ongoing. Citizen Lab, an interdisciplinary laboratory based in Toronto that detects tools for digital repression, at the end of last year published a report revealing a malware attack of ISIS designated to trace their location.

Whereas repressive governments and abusive authorities can only count on a limited amount of stakeholders, citizen journalism can count on the support and mobilization of a considerable number of disinterested but watchful citizens worldwide, among which experts in different fields, increasingly more sophisticated in conducting a media guerilla against the autocrats.