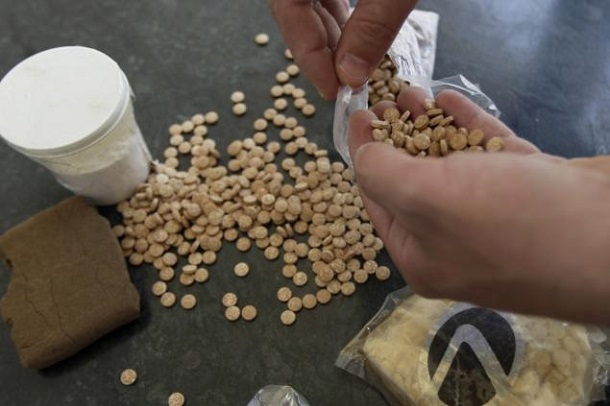 It has been almost six years since the start of the Syrian civil war, six years in which the entire world has powerlessly observed the rapid devolution of a country spiraling out of control. Today, an endless amount of insurgent groups fight the government forces and each other to obtain the power in the country and to mold the future of Syria on their ideological vision of the world. And yet this war does not represent just a battle of ideas, as another factor comes to complicate the situation even further: Captagon.

Captagon is the street name for a drug chemically known as fenethylline, a type of amphetamines invented in Germany in the 60s to treat hyperactivity, narcolepsy and cardiovascular conditions but quickly banned in the 80s because of its high addictiveness. The drug is almost completely unknown to the West but it is highly popular in the Middle East, with most of the production sites being located in Lebanon and Southern Turkey and destined mainly to Saudi Arabia, the biggest consumer worldwide. That is until 2013, when Lebanon´s Bekaa Valley – the busiest manufacturing center of the region – experienced a 90% drop in production, while police kept on seizing more and more batches of pills directed to the Gulf countries.

Where did the production sites move? Experts say the answer might be Syria. The country has long been a transit point for drugs produced in Lebanon and Turkey and destined for the Gulf, according to the United Nations Office on Drugs and Crime (UNDOC). But the conflict has brought about a breakdown of law and order, the collapsing of the country infrastructures and borders and an increasing number of armed groups, transforming the country into the primary producer and possibly consumer of the drug.

“Syria is a tremendous problem in that it’s a collapsed security sector, because of its porous borders, because of the presence of so many criminal elements and organized networks,” the U.N. Office on Drugs and Crime (UNDOC) regional representative, Masood Karimipour, told Voice of America. “There’s a great deal of trafficking being done of all sorts of illicit goods — guns, drugs, money, people.”

The drug can be produced very cheaply and easily with commonly available materials and sells for only about $5 to $20 a pill. The effects are similar to those of many other amphetamines and include a sense of euphoria, no signs of fatigue or hunger, and a general feeling of empowerment and concentration. According to reports, the drug is now being used by an increasing number of fighters in Syria, both by Assad´s army and by paramilitary groups, including ISIS.

Experts say many consider it more like an energy medication than a drug, since its consumption does not require smoking or injecting it but simply swallowing a pill. Only the most fundamentalist rebel groups linked to Al-Nushra and Al-Quaeda seem to be rejecting its use based on ideological reasons, and it is believed that an increasing amount of the civilian population is consuming it to cope with the despairing reality of this never-ending war.

A former Syrian fighter told his story to BBC Arabic for a documentary produced in September of this year about the spreading of drug use in Lebanon and in the region.

“So the brigade leader came and told us, ‘this pill gives you energy, try it,’ so we took it the first time. We felt physically fit. And if there were 10 people in front of you, you could catch them and kill them. You’re awake all the time. You don’t have any problems, you don’t even think about sleeping, you don’t think to leave the checkpoint. It gives you great courage and power. If the leader told you to go break into a military barracks, I will break in with a brave heart and without any feeling of fear at all — you’re not even tired.”

Many media organizations have sensationalized the drug as a substance that can potentially give fighters superhuman strength, in an effort to perhaps explain how a fight that essentially involves ill-trained, nonprofessional rebel groups can be still going on even after Western military forces have intervened with airstrikes in the area. It is clear that fighters can benefit from the stimulant effects of the drug by not needing as much sleep or feeling fearless in combat situations, but chemistry experts such as Vice collaborator Hamilton Morris warn that

“Implying the brutality of ISIS is somehow a product of amphetamine abuse is unfounded and reductionist”.

But the different military and paramilitary groups don’t only use the drug to enhance the combat abilities of their soldiers; the estimated production and trafficking of Captagon based on police seizures and interviews with people connected to the trade, could be generating millions of dollars in annual revenues in Syria. According to reports, a large amount of the profits is being used to purchase weapons by various rebel groups and fuel the cycle of violence.

In the long run the side effects of the drug can be devastating, causing psychotic episodes, severe brain damage, and of course a life-long addiction for some. It is estimated that in Saudi Arabia alone, 40 to 50 000 people per year go to rehab to stop their Captagon consumption. However, since drug use is highly stigmatized and somewhat illegal in the country, the real number of addicts could be much higher. Many fear that the impact of a similar health crisis on a much more unstable and poor country torn by years of vicious civil war like Syria could result in a disastrous humanitarian emergency.