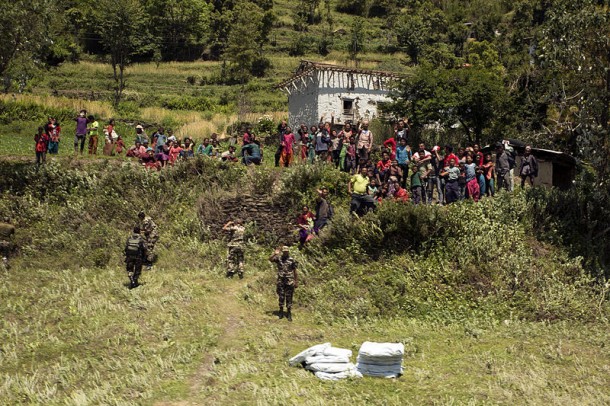 It’s been exactly a month since the 7.8 magnitude earthquake first struck Nepal. Ever since that first moment of panic and scare, thousands of lives have been lost, properties destroyed and world heritage sites fallen amidst devastation and despair. Nepal, a country that had just begun to reap economic growth from an increasingly booming tourism industry, is confronted with daunting tasks to rebuild and reconstruct. While the rescue and relief efforts poured in from all over the world as soon as the first news cycle started, the actual reconstruction progress is partial at best. As Kathmandu – the capital and biggest municipality in Nepal – struggles to get back on its feet in the midst of continuous tremors and aftershocks, rural Nepal – where the epicenter of the quake hit – has to wait for aid and assistance.

Barpak village, a remote village in the Gorka District of Nepal, was the epicenter of the earthquake. According to an immediate report from the Washington Post, the village has been flattened by the earthquake with an estimated of 700 villagers dead out of the 1,200 homes in the normally peaceful and serene village. Yet despite faced with such formidable losses and damages, the blocked, rubble-filled roads left villagers no choice but to desperately wait for helicopters to deliver food and basic necessities.

The wait for government rescue and relief is long and frustrating, prompting many civically engaged Nepalese and foreigners to bypass officially branded, bureaucratic organizations in their endeavors to help. Purchhoki Sherpa, currently an environmental educator intern at a biodynamic farm in Ghent, NY, is originally from Simigaon Village – a small and close-knit community nestled in the high hills of the Himalayas. After the violent force of the earthquake rendered her village to rubble and dust, Sherpa started a page on gofundme.com to ask for assistance in rebuilding a temple and the only school, which according to Sherpa “was built with collection of donations over 10 years and destroyed on its inauguration day when some educational or district leaders had gathered to hand over the project to the villagers.”

In her plea for funds to reconstruct, Sherpa speaks of the difficulties facing afflicted areas such as her village in rural Nepal: “Remote areas, like my village, are always the last places to receive any funds or aid. I am not sure if my tiny, isolated village will even get any relief from the government amid all this mess. So I would like to send as much monetary help as I can gather to assist my home village, which stands at 6,600 ft., to recover from the recent disaster. This task would be impossible without your contributions.” Sherpa’s fundraising efforts are nothing but successful, with a request for a moderate sum gradually growing into a considerable donation. She hopes to directly help the villagers in need, yet with the outage of electricity and ongoing mudslides, the aid has to wait. Her latest update is yet another reflection of rural Nepal’s poignant struggle to rebuild: “I talked to one of my cousins and she said- they are desperately waiting for the road to be safer, so that they can hike up to the village with resources to help families and the guests.”

Sarah West, an Irish volunteer who has been teaching English in the east school of Maya Universe Academy in Chisapani village of Udayapur district for the past few months, expressed similar concerns regarding the obstacles facing rural Nepal in the process of rebuilding and reconstruction. The main school of Maya Universe Academy in Tanahun district, where she previously taught and volunteered, suffered from severe cracks in the girls’ hostel, meaning a lack of living space for the students who otherwise would have to trudge for hours to go to school everyday. West laments the current situation that could leave children displaced: “This situation isn’t ideal as Maya is also trying to provide scholarships for children affected by the earthquake and give them a new home there. However, with hundreds of children qualifying for the scholarship, we have no place to house them. The building of a new hostel is top priority at the moment.”

As the annual monsoon season approaches, rural Nepal faces an increasing amount of hazards, such as landslides, mudslides, contamination of water and displacement of villagers. At an urgent moment like this, effective actions to aid rural Nepal from big organizations and government functions seem slow to come by. Having tried to appeal to big organizations on behalf of her friend whose village was reduced to nothing, West was frustrated about the bureaucratic procedures that often stalled relief efforts: “Unfortunately I found with these organizations, it was very difficult to get anything done. They had a lot of red tape to cross and as well as that, many supplies they had tried to bring into Nepal were stuck at the airport. I drove past myself and saw mountains of boxes stacked up behind locked gates. The government were still trying to figure out what to do with them. If you ask anyone in Nepal if the government has done enough, the answer will be a definite no. The people here feel let down by them in a big way.”

Speaking of the future challenges of afflicted areas in rural Nepal, West pointed out another lurking peril that is worth noting: “Something else I think rural Nepal faces, which is something that is overlooked by many, is the psychological affect of this earthquake on people. People are still afraid and traumatized by this. Even the children, who have been out of school for a month now, are still sleeping outside or near doors. This is something that may heal by itself over time, but I think providing some therapy to these villages could really be great.”

The journey to rebuild and reconstruct Nepal is long and arduous, especially for the rural residents. Yet there is resiliency in the Nepalese to overcome their tribulations with time.