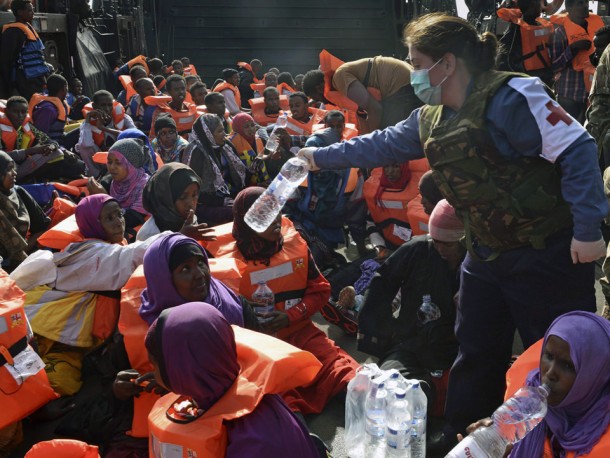 Where Should the Boat Migrants Go in Europe?

Around 5000 migrants were rescued from the sea near Sicily during the last weekend of May. So far in 2015, Italy has received more than 45.000 people who arrived over water. The Southern Mediterranean countries together registered more than 85.000 entrances this year, says the International Organization for Migration (IOM). Where should all these migrants go within Europe?

The rescue mission near Sicily showed, according to Federico Soda, director of the IOM Coordination Office for the Mediterranean, that ‘the situation in large parts of Africa and the Middle East is generating continued mobility, much of it towards Europe’. The most popular routes for migrants to enter Europe are via the Mediterranean and the Balkans. However, most of the asylum applications are not done in those countries, says Eurostat. In 2014, Germany received the highest number of asylum seekers (202.700 applicants), followed by Sweden (81.200), Italy (64.600), France (62.800) and Hungary (42.800).

The European Commission proposed last week to the Council a relocation of 40.000 people from Italy and Greece to other EU Member States. “It is clear that no EU country can or should be left alone to address huge migratory pressures”, the Commission writes on its website. The Commission also proposed an EU-wide resettlement scheme for 20.000 persons outside the European Union that ‘are in clear need of international protection’.

For the relocation of migrants from Italy and Greece the Commission is basing itself on an article of the Treaty of the Functioning of the European Union (TFEU), which deals with emergency situations at external borders. It is the first time this article (Article 78(3), TFEU) is being referred to. Previously, Member States received financial assistance and operational support. But, according to the Commission, Italy and Greece are ‘being confronted with exceptional migration inflows’. In 2014, Italy received 60% of the migrants that crossed EU borders irregularly. Greece received 19% of the total number.

The relocation scheme involves all EU countries, with the exception of the United Kingdom, Ireland and Denmark. The first two countries have an ‘opt-in’ right under the Treaty and can therefore choose whether to participate or not. Denmark has an ‘opt-out’ right and will not participate.

How many migrants the EU countries will take in, depends on different factors. The Commission has created a distribution key, where the size of the population and the size of the economy (the total GDP) are the two main decisive factors. Other factors taken into account are the asylum applications received, resettlement places offered in the last five years and the unemployment rate.

The proposal of the Commissions needs to be adopted by the Council after consultation by the European Parliament.  Then it might become clearer where the boat migrants will go in Europe. Still, as the Council represents the interests of the EU Member States, it is up to them to react to this challenge.