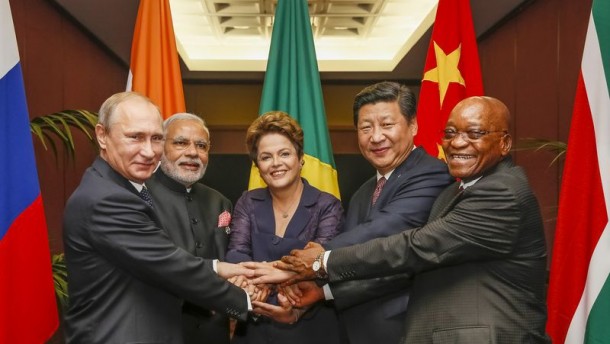 It’s been a long time since their “birth” in 2001, when Jim O’Neil in a Goldman Sachs paper gave to the light the acronym BRICs. But these countries have come a long way and they are now actually, to all intents and purposes, economic giants.

Consider this fact: in the 1990’s the share of the world GDP of the four original BRICs was about the 10%. Now the constitute about the 25% of global GDP and the 15% of global trade. And we are not counting South Africa, which has been a member since 2010. They are among the top-ten largest economies in the world. Moreover, they are members of major global and multilateral institutions, such as the WTO and G20, they are also among the top–ten voting powers in both the World Bank and IMF.

But Western economic institutions seem to represent an order that nowadays is outdated and, furthermore, criticized by BRICS leaders, which many times demanded to reform the quotations system and the choice of the heads of the IMF and World Bank through an open, merit-based process – while for tradition, instead, an European and an American director lead the two institutions. For sure, BRICS countries didn’t hang out for a positive answer and, in meantime, have put up considerable numbers, led by the slanted-eyed giant, which probably in the whole economic history stands on its own.

Last year, China stood as the largest economy in the world, surpassing the US, for purchasing power parity – and it is not a small thing if we think that it was still nearly USD 17,630 billion.

The big launch of the New Development Bank is seen as a first step to break the control of the US dollar in global trade, as well as the Bretton Woods-institutions. But NDB, that will be operative in 2016, is not the last step made in this direction. Actually, from October 2014 another great project has been launched, that will pull alongside of NDB and potentially overcome western economic institutions – the Asian Infrastructure and Investments Bank, with initial capital double what the NDB had.

India was the first country invited to join the Bank, which Memorandum of Understanding was signed on 23-24 October 2013 by 21 countries – membership enlarged to 57 countries, on April 2015, plus two applying. If Obama didn’t respond enthusiastically to this news, he has been even less when Britain before and then Germany, France and Italy have become members.

And last but not least, the launch of the New Silk Route. China doesn’t do subtle. China, because if we talk about developing countries, we say BRICS – not PINEs, MINTs or E7. Maybe we could talk of the Next-11.. – and if we say BRICS, we say China.

A country whose exponential growth and ravenous hunger are dragging both close and partners countries toward an unprecedented economic expansion. What is sure is that developing countries are challenging the developed ones and the idea of a surpass is not an hypothesis anymore. We have just to comprehend when it is going to happen.

Some analysts point to 2020 as possible prospect. Probably is just too soon for such a fundamental change, but the forecast average growth of developing countries at 5% and the lively 7% that China still maintains make think that an upturning can be too far behind.