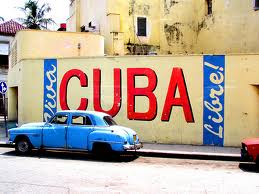 Another break in the wall: Cuba

April 11, 2015 – Panama. The Seventh Summit of the Americas has been the scene of a great event.

The first handshake between the American and the Cuban President in decades. A historic face-to-face that hadn’t been seen in 50 years. USA has removed Cuba from its terrorist black list making a significant step forward in the thaw between Washington and Havana, already. Cuba entered in that list in 1982, at the height of the Cold War. Because, as Obama said : “The Cold War is over”.

Discussions with Cuba on the re-establishment of diplomatic relations, began in the last December, which its embargo started in January 1961. Over the past decade, there has been growing communication with the Cuban government to address national interests.

The country faced a severe economic downturn in 1990 following the withdrawal of former Soviet subsidies worth $4-6 billion annually, according to the CIA website. Cuba at times portrayed the US embargo, as the source of its difficulties.

Until 2014, the average Cuban’s standard of living remains at a lower level than before the collapse of the Soviet Union and the resulting downturn of the 1990s. Since late 2000, Venezuela has been providing oil on preferential terms, and it supplied nearly 160,000 barrels per day of petroleum products. Canada, China, Venezuela and Spain have been the main trade partners in the last years. Trade mostly concentred in imports, which were until the last years three times exports.

An opening to the US market – and most generally, to the world – is expected to provide a wave of investments that the Caribbean State has never seen before. Not to mention the social transformation that can come from it and from the new course given by Raul Castro to the country.

After 53 years, Cuba is finally free, or almost. Now, the question is: will it get its own path or the American way?