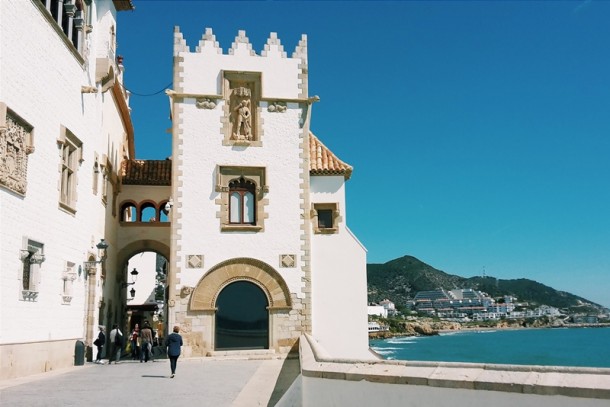 Don’t get me wrong, Barcelona is one great city as is, but there are also some good options of places you could choose from when you have one or two days without any plans. The four choices, amongst the lot, range from old cities, mountains, to beaches on the coast of the Mediterranean.

Only about half an hour train ride from Barcelona, you could enjoy a beautiful coastal city whilst escaping the hustle and bustle of the beach in Barcelona. There is a cathedral by the sea, restaurants scattered along the beach, and the familiar laidback ambiance of a Mediterranean city. To get to Sitges, you could easily choose to take the C2 train from the city, or by bus. In addition to that, the train tickets does not cost as much or you could opt for the T10 train ticket for your whole trip and it will be cheaper overall. This way, you could save up much more. A day would be more than enough if you don’t have much spare time, as the trains run until sometime around 10 pm.

Now, for the mountains. This choice is a must-visit when you are in Barcelona. In simple terms, you will either take a rack railway or cable car to the top of the mountain, where you’ll meet a grand monastery and some impeccable views.  The things that you could do there is to watch the boys choir inside the monastery, and then spare a great amount of time to choose from the two peaks of the mountain, because both peaks require about 2 hours of exploring. The funiculars will take you to one peak will get you to a sacred cave (Santa Cova), and one would get you to some quite amazing trails to the peaks of the mountain, which require some good shoes, some will, and a bit of lunch (Sant Joan). Amazing views overlooking the Pyrenees Mountains as well as the city would be achieved by the trails. The cable car and funicular stations could be reached by train from Placa d’Espanya station in Barcelona. It takes about one hour to get there, and make sure to take into consideration all the schedules of the earliest and latest train to and from the destination.

Now, for more mountains. For those only having one day to spare, some tour companies offer day trips to the Pyrenees and would let you in a few hours free time to hike some trails, yet an option would be also to go there individually and hike the trails on your own speed, and if you have one more day to spend. But, a day would be always better than sparing no days at all to see the mountains of this Spanish countryside.

When in Spain, do as the Romans do. The saying is not that wrong actually, because you could visit a city that was founded by the Romans and was an important Roman port. It only takes about half an hour from Barcelona by train, and there are some interesting sights including the amphitheater that was used for fights between gladiators and animals. You could also opt to go to Balcon del Mediterraneo, a point with the best views of the port city.