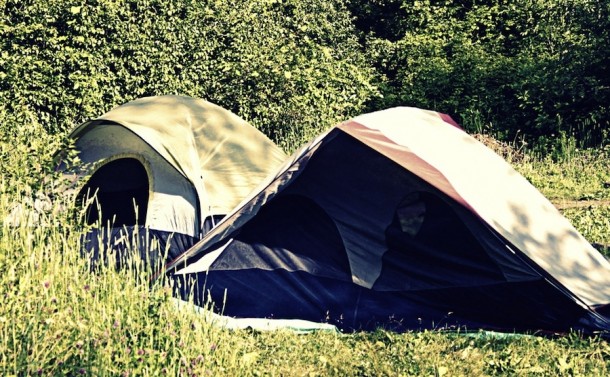 Camping in the American South

I spent 16 days road-tripping with a friend, following the Gulf of Mexico before turning north through Appalachia. Several nights were spent between family, friends, and Airbnbs, but some of the best were spent in a tent.

We camped in Texas, Mississippi, Florida, and North Carolina. Between the buzzards in Texas to the bear-locks in North Carolina, each had a character all its own. The common denominator? Humidity.

Step outside the cold, air-conditioned oases of most structures in the South, and it’s like you suddenly dropped into a micro rainforest of stickiness, rife with gnats and mosquitoes. You begin to discover sweat glands you didn’t even know you had. On the average summer afternoon, temperatures reach 36 celsius and humidity levels hover around 90%. This is especially oppressive in the mornings; unzipping the rain cover from the tent we felt like steamed mussels, cracked open and oozing from the long stint overnight.

Why would anyone consider camping here? The answer is simple: it’s not as bad as you imagine. The nights are usually significantly cooler, and there is something to be said of the serenity experienced opening your eyes and seeing a strange, beautiful landscape at your feet.

There are some important things to keep in mind if you decide to rough it on a trek through this part of the U.S., besides the obvious necessities of staying hydrated and being a little familiar with old-fashioned map navigation.

It’s important to realize this is probably supposed to be a holiday. Rushing between cities does not mean you are going to see everything you want to see. Sometimes you may not see anything you had planned to see. It is important to be open to the options that present themselves — be it trying out a spectacular food truck recommendation, or staying hours after your planned departure to watch millions of bats descend from a big city bridge.

Lingering in Austin long enough to watch the bats fly over the heads of at least a few children who still believed in vampires, my friend and I agreed it would be best to find a campsite halfway to Houston, our next stop and first on the Gulf. After a few searches sponsored by freecampsites.net, we settled on Park Prairie Park.

There is not much to be said for the facilities, but the campground’s location on the edge of a lake made it an ideal place to spend some time, once we were awakened by what sounded like the rustling of long coats but ended up being at least two dozen large carrion birds, shuffling around like they were planning our demise.

Flash-forward to post-New Orleans blues and we found ourselves in Gautier, Miss. Shepard offered both the Holy Grail of campsites (air-conditioned restroom house with showers), and the underrated ability to start a fire on the ground.

You feel good when you get a successful fire going, when the cooking sausages sizzle over the flames and a precious no-bug sphere is created around your repellant-soaked body. It’s a place for people to come together, settle down, and even play some music. Between my friend’s semi-adept guitar playing and my own pathetic attempts at the harmonica (and a bottle of whiskey between us), it was one of the best nights on the trip.

Lesson 3, Pelican Palms, Florida: Not Everything is Going to Go Your Way.

It is key to have the understanding that, despite anyone’s best efforts to plan for anything, things can and probably will go wrong. In my case, the campground we had planned to stay at in Pensacola, Florida – with pristine, white sand beaches and the ocean an actual stone’s skip away – was entirely booked up by the time we arrived at the park’s gates that evening.

After several disgruntled phone calls we managed to find an open campsite at an RV park, 23 miles inland. Pelican Palms ended up being a fantastic place to stay from the very beginning, with the park manager staying an hour after closing to check us in.

In the days preceding our arrival in Pensacola, I had set my heart on this one campsite for this one night. This is a huge mistake to make when traveling anywhere, let alone when camping is involved. Plan and get excited for your journey, but never let yourself get too invested in any one part. It’s the unplanned-for surprises that often end up teaching us the most about ourselves, and better prepare us for future incidents.

Lesson 4, Mount Pisgah, North Carolina: The Drive is Half the Journey.

Our final campsite was nestled in the Appalachian Mountains, a good half hour drive outside of my favorite U.S. city, Asheville. The only way to get from Asheville to Mount Pisgah is to hop on a jewel of the South: the Blue Ridge Parkway. This highway meanders through the mountains and offers some of the best views of the region; on our way into town we were lucky to catch one of the purple-and-gold sunsets that regularly graces the peaks, and on our return the lack of lights gave a stellar view of the Milky Way.

We stopped often that afternoon to take photos and to take in the beauty of the nature that was around us. Even though places like these are unlikely to find their way into an international travel brochure, taking the time to put a little more effort into our stay (and saving some bucks in the process) added a whole other dimension to our trip, and allowed for us to experience things that we would otherwise have missed entirely.

The next time you start planning a road trip, consider investing in a tent (and heaps of patience). The stories you’ll bring back will be worth the effort.