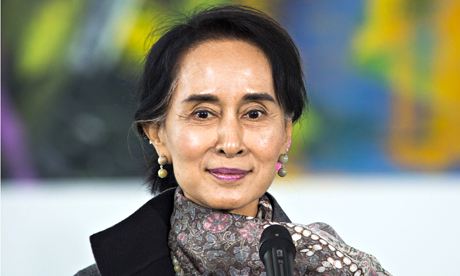 However, her popularity and the hope riding on her candidacy will not be enough to carry her to the highest office in the country as Suu Kyi is technically disqualified from the presidency as her children are British citizens, and therefore Suu Kyi is blocked by Article 59 (f) of Myanmar’s constitution that states the candidates’ children should not “owe allegiance to a foreign power”.

Despite her disqualification, Suu Kyi’s declaration of candidacy in the upcoming election signifies yet another step forward in Myanmar’s transition towards democracy.

The road to democracy in this impoverished South-East Asian nation has been long and turbulent, as a period of military rule only ended in 2011 after the election of a somewhat democratic government led by former military officials.

Since the end of military rule in 2011, Myanmar has begun to open itself up to its neighbours and to the rest of the world in relation to trade and foreign affairs.

Both US President Obama and then-Secretary of State Hillary Clinton have made official state visits to Myanmar in recent years, and diplomatic relations between the country and its neighbours have improved greatly, despite the fact that challenges involving various ethnic minorities still persist in the country.

The upcoming November 8 general election is expected to see the end of the current ruling government led by the Union Solidarity and Development Party (USDP) as Suu Kyi’s opposition party, the National League for Democracy (NLD), has been gaining rapidly in the polls since their overwhelming victories in a series of local by-elections held in 2012.

Aung San Suu Kyi announced on July 11 that her party would contest almost all seats in the national poll, with the exception of a small number of seats generally won by parties that represented ethnic minorities in those regions.

Suu Kyi said that the aim of her party was “to continue implementing the democratic transition that has yet to be achieved”.

Many within Suu Kyi’s party hope that if the NLD puts in a strong showing and manages to enter a government coalition, then the USDP and its ex-military leaders would be inclined to relax the article of the 2008 junta-imposed constitution that forces Suu Kyi out of contention for the presidency.

The ruling USDP has already begun bracing itself for major losses on the upcoming poll, with the party’s general secretary Maung Maung Thein told reporters, “We don’t expect a winning result like in 2010. It’s impossible.”

In further problems for the government, it seems that tensions have been rising between party leaders and the powerful army which could spell trouble for the longevity of the party and those who currently lead it.