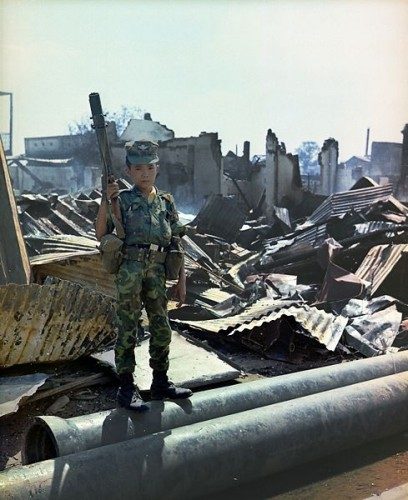 On July 27, the United States Department of State released the Trafficking in Persons Report 2015 in which they disclose the conditions of child soldiers who have been forcefully trafficked or recruited into militarized institutions around the globe. The Trafficking in Persons Report is a required publication under The Child Soldiers Prevention Act of 2008 (CSPA), which also restricts the U.S. from giving peacekeeping and military assistance to countries that make the CSPA list. This year, countries such as Myanmar (Burma), the Democratic Republic of the Congo (DRC), Nigeria, Somalia, South Sudan, Sudan, Syria and Yemen are identified on the list as governments that have coerced children under 18 to fight in armed conflicts. While some of these countries have remained some of the worst offenders of child trafficking since the bill went into effect, Secretary of State John Kerry, in the preface of the report, defines militarization of children as a “global scourge” that requires a “global solution.”

Combatting child trafficking is a challenging task. Even as the U.S. joins in the fight against traffickers and their crime networks, millions of people continue to be forced into labor, sexual services and to fight as soldiers. The situation is particularly severe in the case of child soldiers. Children have been forcefully recruited into brutal military institutions and instructed to commit war crimes, such as rape, killing and pillaging. Many of them are told to fight on the front lines while others become suicide bombers. For those who are lucky to have escaped their situation, restitution and revenge await them ahead instead of freedom and self-determination.

Myanmar has long had issues with the recruitment of child soldiers. In a documentary produced by Radio Free Asia, several Burmese child soldiers recounted their experience of either being abducted, threatened or forced to join the army. Others, feeling the pressure to fight against their own ethnic people, fled to join the other side. However, circumstances are dire for child soldiers on both sides. In the deeply brutalized military institutions, child soldiers are not only expected to put their lives on the line but also provide slave-like labor or even sexual services to superior officers.

Since the rise of the Islamic State (ISIS) at least hundreds of child soldiers have been recruited into both ISIS and other anti-ISIS fighting groups. Most recently, with ISIS’s ever expanding occupation of Iraqi land, children and youngsters have increasingly joined the army either by force or out of voluntary desire to fight. According to an updated report from U.S. News & World Report, Iraqi militias have also started to train youngsters to fight just as ISIS “recruited” its child fighters and then trained them in military boot camps months ago.

Child soldiers are often tormented physically and emotionally as they are being trained to prepare for battle. The most serious damage imposed on youngsters in conflicts is their psychology. Not yet well formed as an adult’s mind, many child soldiers are traumatized and scarred from not participating in normal social functions. These post traumatic distresses build up from a young age to inevitably further confine them to a life of poverty and insecurity. This form of brutality is nothing but the face of a modern slavery.

The existence of child soldiers is tied into the larger-scale issue of nations’ poor governance and extractive economies. No nation will be able to fight child trafficking alone. It is only through global as well as national participation in anti-trafficking programs that countries can eliminate rampant trafficking crimes.