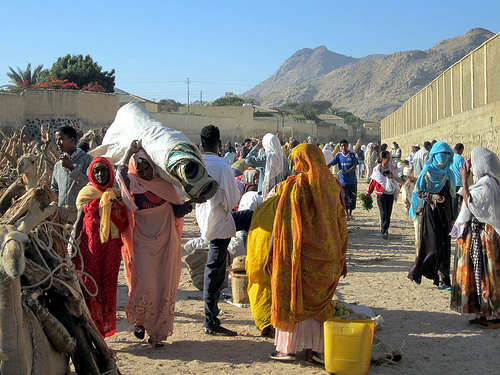 Eritreans Are Not Economic Migrants

Eritreans constitute the second largest nationality group, after Syrians who escapes its homeland and crosses the Mediterranean to reach Europe. They constituted 22% of all people entering Italy by boat last year (UNHCR).

Eritreans, as many other migrants do, risk capture, detention, torture and death along their desperate journey. They have to cross neighbouring war-torn countries, to survive desert, ruthless human traffickers and, lastly, the sea. But, in spite of what Europe seems to assert, they do not decide to face all of this just for mere economic motivations.

Eritrea is commonly known as the ‘Africa’s North Korea‘. Political reasons rather than economic ones explain their massive flee. As stated in the United Nations Commission of Inquiry report published in June this year, “it is not law that rules Eritreans – but fear.”

Indeed, the report depicts the regime’s repressive systems used by the government to surveil and silence its own population. Enforced disappearances, inhuman prison conditions, violations of freedom of expression and religion or belief are what constitutes the daily life in Eritrea. Furthermore, the report also adds that “the violations in the areas of extrajudicial executions, torture (including sexual torture), national service and forced labour may constitute crimes against humanity.”

Most likely, that is why about 200 Eritreans leave their country everyday. They do not emigrate solely in order to reach better economic conditions.

The EU recently decided to assign Eritrean Government a development aid package worth €312m to be financed between now and 2020. The aim is to reduce the exodus towards Europe’s shores: the financial support will boost economic development in the country, reducing the Eritreans outflow. Unlikely, that is not what is going to happen. Eritreans will keep on fleeing because they are not looking for jobs but escaping a tyranny and, in many cases, they need and are entitled to international protection. Europe can not feign of not being aware of that.

Reporters Without Borders (RWB) stated that the European Development Fund assistance is granted to an authoritarian regime in exchange of a promise to carry out democratic reforms “in its own way” during the next years. That is simply not acceptable. RWF also added that it is important to maintain a dialogue but the EU is supporting the Government of a state that has never had democratic elections and which regime is far from being willing to talk about. Moreover the corruption in Eritrea is rampant. The EU should at least condition the funding to close monitoring and the Eritrean government to provide credible guarantees on better respect of human rights standards.

Freedom House evaluated Eritrea as ‘not free’ in its last annual report. President Issayas Afeworki’s murderous regime should not be supported by the EU. But if aid to Eritrea is to be provided, strict listed obligations must be part of the deal. The EU needs to demonstrate that its values and principles are not rhetoric. Securing European shores can not be strategically more important than defending Eritreans’ human rights.