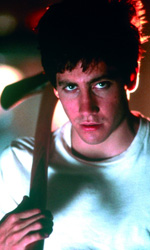 Independent Cinema: 10 Films You Should Not Miss

Two Lovers (2008, Usa, James Gray)- A tormenting love story where sense is ever against madness. Joaquin Phoenix is the man who loves Miss Paltrow and has to get marry Vanessa Shaw. For this reason the main character could risk one’s life. After view, you won’t say James Gray is only a good action filmaker.

Centochiodi (2007, Ita, Ermanno Olmi)- A catholic gentleman has directed a teacher deciding to leave this academic profession and ethic convinction to stay with ordinary people. The deepest humanistic and anti-prejudice novel. The script, written by journalist Tullio Kezich, is a masterpiece of emotional thoughts and angry.

The ghost writer (2010, France/Germany and United Kingdom, Roman Polanski)- Polanski was cherged with rape. Critics told his career was over, but he surprised everybody with a political thriller, based on Harris’book, following facts on American President and his new ghost writer and standing out an amusing final cut. I can’t add anything else.

Buried (2010, Spain and Usa, Rodrigo Cortes)- 94 minutes for a truck driver locked in a wooden coffin by terrorists of Iraq. A little mobile is used to connect with others. Cortes shows audience this desperate attempt to survive and to develop a new claustrofobic style.

Locke (2013, Usa and UK, Steven Knight)- A road movie inside car. Travelling by night, Tom Hardy discovers the sense of a live. A great number of calls will save his soul?

Lars and real girl (2007, Usa, Craig Gillespie)- Great performance of Ryan Gosling, unable to create relationships. One day, he introduces his family a new girlfriend: a real doll. Since that moment, he is going to demonstrate what is put down existence of normal community. Sweet movie.

Elephant (2003, Usa, Gus Van Sant)- Ispired by murder at Columbine High School, we will the portrait of a society that can’t community good examples. In fact, dialogues are not a lots. Long-take of film is not so boring.

Anche libero va bene (2005, Italy and Slovakia, Kim Rossi Stuart)- The first movie directed by KRS. Italian director is focused on father who brings up two sons by himself. His feeling seems a bitter challenge to responsibility. Watching the film you could smile and many times cry. Unfortunately, tv and newspapers weren’t interested to.

Kill The Messanger (2014, Usa, Michael Cuesta)- How the life of a reporter investigating about traffic drugs between Cia and narcos is destroyed? Answering the question will reveal leit motiv of this interesting spy story. A man versus an obscure power, according to opinion of books signed by Schou and Webb.

Donnie Darko (2001, Usa, Richard Kelly)- Visions, scandals and good music. Donnie Darko is one of most romantic guy in the history of cinema. Many questions and few doubts. The vision is just as a big experience. S.Darko, the sequel, is really bad.