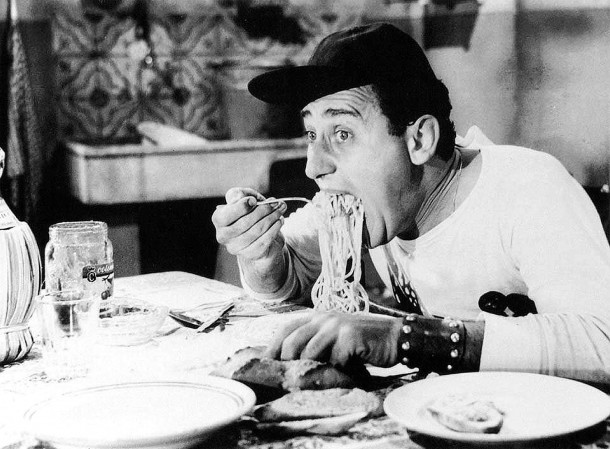 Among the main traits of italian movies, one stands out as (stereo)typical: the family meal. In spite of different directors, genres, decades, it has remained an unmissable moment to display the suble intimacy, the hidden antagonism or the undercover violence that belong to familiar circles. In her latest essay The taste of italian cinema, writer and movie critic Laura Delli Colli explores how the theme is presented by the biggest italian directors and how the choice of dishes has changed over 50 years (she also provides the reader with a recipe for each movie):

“In the fifties, the combination film – food on the screen was mainly based on popular taste: rigatoni, lasagne or, as in the series of various Pane, amore e … , spaghetti epitomized bliss” she tells Rooster News. “Pasta and pizza were then dominant. Today, as family is undergoing a crisis due to divorces and remarriages, on the one side we increasingly see mothers who have lost their traditional role as the ones in charge of cooking in favour of men (as in I travel alone by Mariasole Tognazzi) or family’s friends” (as in The Ignorant Fairies by Ozpetek. 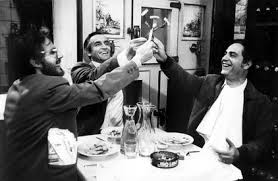 From the movie C’eravamo tanto amati.

On the other hand, as family members follow health trends, food divide them instead of joining them: for instance, in Sergio Castellitto’s No one is saved alone, the main characters display the distances between them through their food choice. She is a former anorexic, barely eats and now is a stubborn vegetarian whereas he orders, and eagerly devours, cutlet with potatoes. In Hungry hearts by Saverio Costanzo, with Alba Rohrwacher, food quality becomes an obsession to the point of not feeding a child enough for him to grow up.

The appreciation for big feasts such as in La grande bouffe by Ferreri (you can see one of the main sequence here) has been replaced by the issue of quality of food. But this change marks also a sociological shift from the time when Italy were booming and yet main characters usually belonged to the low or middle class, to the present years, in which Italy is struggling to recover from recession and movies focus on the affluent creative class. If in the past Italians longed for pasta and chickpeas which, “as in the movie Unknown thieves was the symbol of extreme poverty” Delli Colli says, now that they are better off, “they look for local food and fresh ingredients. We will see that in two italian movies which will be across european cinemas in the next few weeks: The waiting by Piero Messina, with Juliette Binoche and A Bigger Splash, by Luca Guadagnino, with Ralph Fiennes. Both show an increasing attention to the preparation of meals because food has become a metaphor. It embodies the care and respect we and our beloved family members, or occasional lovers, deserve”.

Which is you italian favourite movie of all time? Share your opinion on Twitter at @RoosterGNN and bluelisaaa with the #italianmovies.