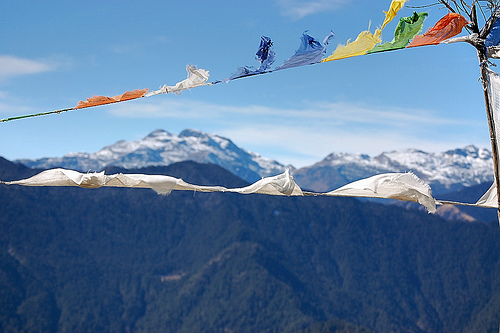 Have you ever heard of the kingdom of Bhutan? It is small State in the mountains of Asia, near Tibet and India. It is famous for its beautiful landscapes, for its preservation of nature, and for its handcraft objects in bronze and silver. It is a Buddhist country which counts over 19 languages and dialects, and which started to promote tourism in the 70s.

However, the Himalayan kingdom is mainly known for its revolutionary policy of Gross National Happiness introduced in 1972. The Gross National Happiness index functions as the Gross Domestic Product, but it does not calculate the size of the economy of a state but the happiness of its citizens. This happiness is measured based on natural and cultural preservation, social development and good governance. The GHN has entered in every aspect of Bhutanese life, from education to work. The government of Bhutan measured the happiness of its citizens one time using a questionnaire and Bhutanese politicians try to foster every law in order to make people happier.

Of course, the Buddhist tradition of the State helps to promote the “happiness approach”, teaching the respect for nature, the techniques of meditation and equal opportunities for everyone. The Bhutanese government, following these principles, founded the “green schools” where children learn agriculture, recycling and meditation. In addition, even the UN recognizes that “the pursuit of happiness is a fundamental human goal” for the Asian kingdom.

Eric Weiner on the BBC suggested that Bhutanese people is happy because they think about death at least five times a day. It seems a strange thing to say, by researchers have discovered that if you think about your fears, i.e. death, and contemplate them, you are inclined to be more happy and fearless.

As frequently happens even in this story there is a dark side. Contrarily of what people thinks GNH has not substitute the GDP, and it is not true that they do not have problems. As some commentators have noticed, Bhutan is still undeveloped in some fields, as the health system and infrastructures, and in the last years, the GHN had become more a slogan than a real political issue. Moreover, it is still possible to observe an underdevelopment in many social fields, as the equality between men and women (and the violence on women), alcohol abuse, or the difference in wealth between country and city which is very distant from the concept of happiness.

Bhutan is a small kingdom, which has only recently open its doors to the occident, so it is still possible to improve the mechanism of Gross National Happiness and advance in the areas of Bhutanese societies that are still backward. Furthermore, the West world, permeated by the theories of capitalism and profit, could take as an example the little Asian state, and start to give more importance to the happiness of citizens and less to the appearances.