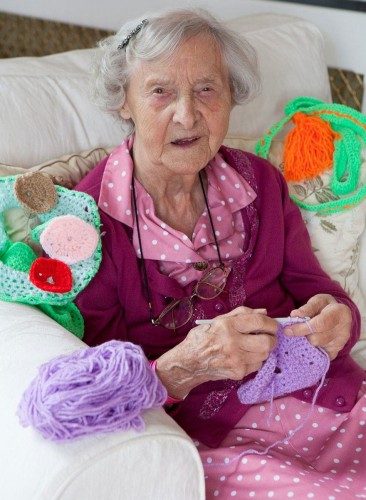 Grace and No Pressure: Meet the Oldest Street Artist Ever

At 104, Grace Brett might be the oldest street artist in the world. Although her passion for knitting was no secret, no one saw what was coming: a yearn invasion. Wheras grandmas usually make sweaters for their grandchildren, Grace is part of a secret group using their knitting and crocheting talents to brighten up an entire community.

With the help of 40 Souter Stormers, that recently yarn-bombed 46 landmarks in the Scottish county of Borders, Grace yarn-bombed her hometown Selkirk, on the occasion of the YES (Yarrow – Ettrick – Selkirk) arts festival. “The yarnstormers, a group of mixed age range, have been inspired by Grace to use their creative and artistic skills to transform the Selkirk landscape,” said Kay Ross, a spokeswoman for the Souter Stormers group. In contrast to the rest of the group, she is brave enough to to show her face. As the oldest member of the Stormers (and perhaps of the region also), she sets her own rules.

Nevertheless, “Grace has confirmed that age is no barrier to participating in a contemporary project”, Ross added. Among the pieces (you can see them here)   there were a bench covering, a cover for a classic British red phone booth and other hanging ornaments, all of which spruced up the city with colors.

“I thought it was a really good idea to decorate the town and enjoyed having my crochet included,” Brett told the Press and Journal. “I liked seeing my work showing with everyone else and thought the town looked lovely”.

Brett is reported to have learned crochet and knitting as a teenager and has enjoyed it ever since: as she’s done bedspreads for her children and grandchildren one might wonder what they think of their creative grandmother who has been working “undercover” until she become a cover story.