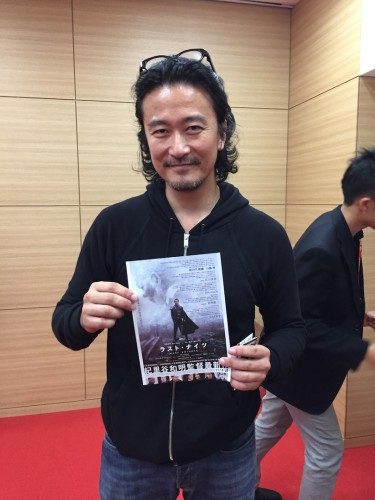 Last Knights is a movie set in a medieval world where the people are a utopian mix of ethnicities, but yet feudal lords and power struggles still dominate.

The protagonist, Raiden and his men obey their master Lord Bartok unbendingly as samurai would to theirs. They uphold a “code” which is symbolic of the 7 moral virtues embodied by the bushidou 武士道 code of conduct. Lord Bartok offends the emperor’s first council and Raiden is ordered by his master to carry out his own execution. Raiden and his men become ronin or masterless roaming samurai and secretly plot revenge against the corrupt reigning body.

A loose adaptation of the classic legendary Japanese film 47 Ronin or Chuushingura 忠臣蔵, Last Knights attempts to showcase samurai values and chivalry but also refutes Japanese cultural values at times. References to the real world such as the gothic architecture, padi terrace fields, Captain America warrior shields, and Trojan horse represent semblance to a society that is constituted of people of all races. The traditional Japanese collectivist mindset that values exclusivity from other races or countries is absent. Furthermore intentionally or not, it resonates with Zen thought on materialism and the origin of everything, humans and objects included. That said, it also emphasizes the significance of balance between an authoritative body and the masses in society.

How was the international cast of 17 nationalities chosen?

Kazuaki Kiriya: I wanted to break the typecasting in Hollywood. I told the casting director, let’s go colorblind here, let’s try to pick the best from all over the world. Trying to break the race boundary could be racism on its own, in strategically choosing actors based on their nationality. I said, let’s choose actors based on skill, that’s all.

War happened in the past usually due to geographical or racial boundaries. Since everyone is of different ethnicities in the movie, why are they not at peace? Does this correlate to power and human nature?

The boundary is between people who believe in the tangible, and people who believe in the intangible. When there is separation, there is always comparison, and this results in conflict. The same for religion, the first thing preached is love, so why is there a need for separation into the different denominations? As soon as you believe in materialism, you would want to protect your possessions and hence boundaries are created. We [inevitably] separate, because there are certain people who benefit from the separation. When people are separated and labeled, it creates line between superior and inferior. And you are expected to behave a certain way because of that label.

The samurai code also creates a separation between people, where you fight for your master and your people. How does that transcend boundaries?

In my opinion, this code is universal. The characters in the movie act on the same code, which is based on honour. They are separate by clans, but they still respect and understand each other. For example, I happen to be Japanese and I have many friends from Korea, China, America, and everywhere. But for some reason when you look at the news, supposedly we hate each other. It’s crazy if you ask me. So the code that we’re talking about here is about trying to love everybody. As soon as you start believing in naming and labeling, then we have a problem.

The first council was assassinated by the ronin out of revenge for their master. Why not kill the emperor? He represented the entire tyranny and condoned corruption and other bad practices even if he was not the one acting them out.

Revolutions throw everything into chaos, and uprisings happen in cycles. What’s important is to show the way to the people, rather than to kill the source because these powers are never singular. There will always be a [figurative] king. But the people are the ones who bring balance, democracy to the world. This is also why the original 47 Ronin was so popular, because it planted the seed of empowerment in the masses.

Last Knights was released on 3rd April in North America and 14th November in Japan, and stars Clive Owen and Morgan Freeman.