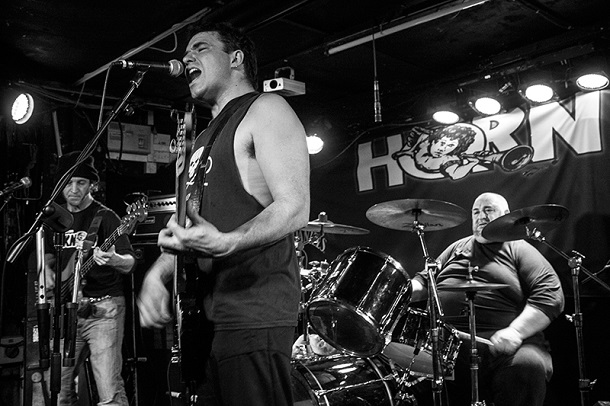 “A Punk Tour with Inner Terrestrials” Interview with Benedetta Bassi

Wandering randomly through the streets of Udine last week, I discovered an amazing exhibition of photographs. Here’s my talk with the author, Benedetta Bassi.

1. Tell us something about this project.

Well, it is a collection of photos taken during the Inner Terrestrials tour in 2013 in the UK. I travelled with the band in those days, actually, there were only 5 days and four gigs; but I had travelled before with them and also after that tour. However, I realized, thanks also to Lorenzo Manià, comic writer and graphic designer from Udine, that those photographs were a complete work so we decided to put them together and create this book and exhibition. Moreover, that tour has a particular meaning for me because it was the last one for the drummer who sadly passed away this year.

2. What are your future plans?

Actually, this project helped me to focus on the crowd. I began to photograph and capture the spectators more than the band on the stage! Because it seems to me the perfect way to capture and tell the energy during a gig. From this point of view, I have started two different projects, the first one is on stagediving and the second one focuses on portraits of the people who attend gigs. And I am also regular photographer of Nomotion, a southern gothic, garage punk band from Udine. 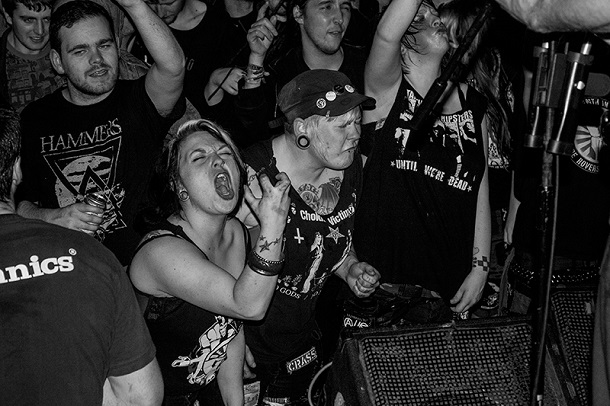 3. How did you decide to publish the book? How long does it take for the editing?

As a matter of fact most of the work for the book was made by Lorenzo! With Lorenzo, I was looking at my photo archive and he said that my photos were a complete work. At the beginning, we decided to focus on a tour and to describe an ordinary day using photos from different dates, and then I realized that I could use the photos to describe it as a diary on tour, in order to show also the routine of what happens. Therefore, you can see the arrival of the band, the instruments, the gig and also the after gig, in the beds, and the breakfast of the day after. This concept is very clear if you see the exhibition. So, I can say that I worked with Lorenzo for the concept and editing, I chose some photos, he chose others, and I deleted some of them and so on. And finally, the book was ready.

4. What is your technique? What camera did you use?

I use a reflex, a Canon Eos 450D, which starts to become old and less reactive (or maybe I’ve become more demanding), so for the moment I haven’t a professional camera. I try to reach ‘on the ground’ what I have in mind in order to restrict the post-production. I start with some test shootings to understand the light conditions, decide with what ISO I have to work and then I decide a range of possibilities, which allows me to have the contrast and brightness that I search for. When I find this range, I focus on composition and on finding the right moment without bothering the crowd at the gig.

I find inspiration from the shootings over contrasted of the 80s and 90s, the ones you could find in the fanzines, shot by people who were protagonists of those moments, without artistic inspiration, they only wanted to have a memory of the gig. With a camera in one hand, with a flash that caused blindness and a film for 36 shootings, what came out, came out. In those years, real art was made! And for this reason, I don’t fear using the flash! 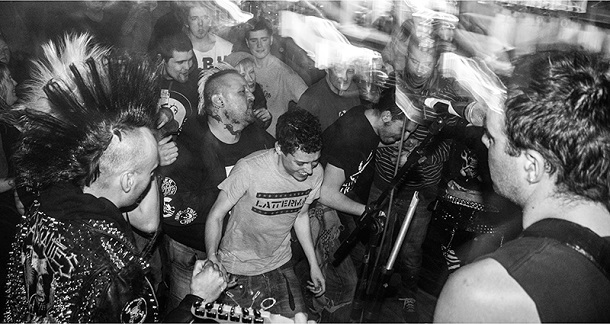 5. What was or what is the thing, the feeling, that you like most during a punk tour?

Speaking of photographs, when the gig is lively and the crowd is engaged, I enjoy photos and I have even more fun, I sing, pogo and take photos at the same moment, and above all, I feel it. After the concert it is as fun as well, because the excitement slows down and all have fun without cares! You can also find yourself in strange situations!

Speaking from my personal point of view, being inside the DIY world I like it when the bands play in squats or outside mainstream places. Gigs built up only by people’s enthusiasm. I like it because I meet people with as similar experiences as mine and I can compare my work with theirs and discuss how it is difficult (or not difficult…) to carry on non-commercial projects, etc… and all those things linked with these situations, which people can manage without the interference of the State.

Benedetta Bassi is a photographer DIY from Udine, check out her work at Flickr and on her website.