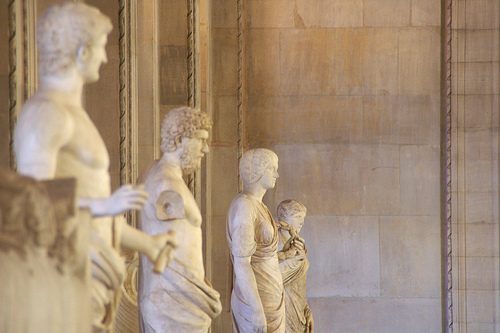 The Case of the Roman Statues

Few days ago in Italy there was a new public political and cultural debate. During the State Visit in Rome of the Iranian president, some bare Roman statues in Musei Capitolini were covered by wood panels: the works of art were completely obscured.  Actually there were a lot of statues which were covered for the State Visit: the most important work of art obscured was the Venere Capitolina, Roman copy of an Greek original of the II century B. C. The Venere is one of the most beautiful works in the museum.

These works of art dating from the Classic Age have been obscured in order not to hurt the feelings of the Iranian president. The photos of the covered statues have been showed around the web and immediately were born in Italy a political debate; the news was also international because many international newspapers have published the news and they have criticised the Italian choice. Why did they obscure the Roman statues and who decided to do this coverage?

The bare statues of the Classical Age are one of the most beautiful artistic evidences of the Roman period and they are, actually, a symbol of that classic culture and of our European modern society.  These statues are an integral part of our history and heritage.

This case in fact has opened two different debates in Italy: the first one is cultural, which is if it was correct covering the bare statues (most of all agree that it was a mistake), the other one is political: Who gave the order to cover the works of art? To this question we probably don’t received a satisfactory answer.

Covering the statues was seen as an insult to our history, a way to “abdicate” our classic culture. As the Minister of Culture, Dari Franceschini, claimed “this choice was a tragic mistake” because it is true that we need to respect other cultures and feelings but we don’t have to limit our culture and values. It is equally important and fundamental.

Probably the wisest choice (and most simple) would be to change the route of the Iranian delegation inside the building so that the Iranian president wouldn’t pass in the hallway with Roman statues. With this solution both the two cultures would be respected.