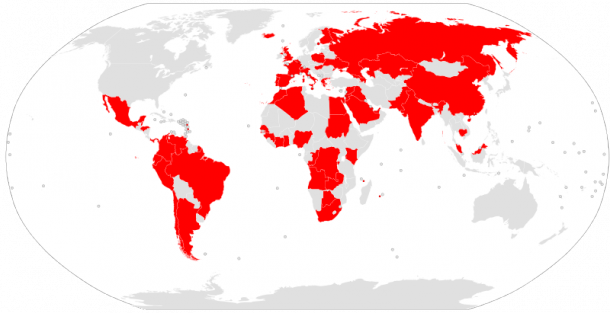 The World’s Most Prominent Personalities And Their Tax Haven

You find someone you can really trust – better, of course, if you also have another close friend running a bank – and a law firm specialized in offshore companies that helps setting up, in your best friend’s name, companies where privacy law ensure no one needs to know: these are the steps “to hide a billion dollar”, as the Guardian shows in its video explainer.

This is also what some of the most renowned world’s leaders, politicians and celebrities did to be involved in the biggest data leak in history: the Panama papers scandal. It took 11.5 million documents, 2.6 terabytes of data, more than 350 journalists from 76 countries and almost one year of research to reveal it.

When it all began

It all began when over a year ago an anonymous source – renamed “John Doe” in America, a hypothetical average man – contacted the German newspaper Suddeutsche Zeitung and submitted encrypted internal documents from Mossack Fonseca, a Panama-based law firm whose services include incorporating companies in offshore jurisdictions, the so-called “tax havens” scattered throughout the planet. It is considered the fourth most important society in the all world for this kind of service, but its credibility – based on the extreme secrecy guaranteed to its costumers and their figureheads – now risks to be completely lost. The source, most likely (or imaginably) someone who worked within the law firm, didn’t ask for anything in exchange of the precious information, except for the maintenance of the anonymity.

The Suddeutsche Zeitung shared the documents with the International Consortium of Investigative Journalists, which in turn shared them with a large network of international partners. As the Investigative Research Unit reports, the professionals working on the case – research groups have been set up for specific countries – explored thousands of folders (one for each shell firm) containing emails, pdf files, pictures, passport copies and certificates, when they began to look for specific people and their inner circles. From the investigation stemmed the realization that each country has its own dossier, with names and numbers showing the many ways people exploited secretive offshore tax regimes over a period of almost 40 years. For each name found, a new detailed process of research began.

Not everyone using offshore structures can be considered guilty: owning an offshore company is in fact not illegal in itself. However, generally it appears that the corrupted, criminals and money launderers of the world take advantage of this anonymous company structures to make their own financial interests illegally. The Panama Papers reveal that, among all the people involved, there are Vladimir Putin, through his musician close friend Sergei Roldugin; Salman bin Abdulaziz Al Saud, King of Saudi Arabia; Mohammed VI, King of Morocco; Mauricio Macri, president of Argentina; Ilham Aliyev, president of Azerbaijan; Nawaz Sharif, Pakistan’s prime minister; Ayad Allawi, ex-interim prime minister and former vice-president of Iraq; Petro Poroshenko, president of Ukraine; Alaa Mubarak, son of Egypt’s former president and Sigmundur Davíð Gunnlaugsson, the Iceland’s prime minister. As reported by the Guardian, “in the UK six members of the House of Lords, three former Conservative MPs and dozens of donors to British political parties have had offshore assets. The families of at least eight current and former members of China’s supreme ruling body, the politburo, have been found to have hidden wealth offshore. Twenty-three individuals who have had sanctions imposed on them for supporting the regimes in North Korea, Zimbabwe, Russia, Iran and Syria have been clients of Mossack Fonseca. A key member of Fifa’s powerful ethics committee, which is supposed to be spearheading reform at world football’s scandal-hit governing body, acted as a lawyer for individuals and companies recently charged with bribery and corruption.” Moreover, Mossack Fonsecas’ clients include criminals and members of various Mafia groups.

Mossack Fonseca now reserves itself the right to not discuss specific cases and firmly defends its conduct from any misuse of its services. However, at this point, everything seems just too hard to believe.