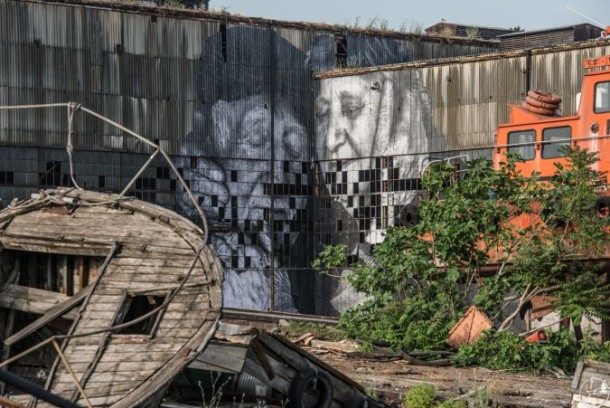 JR and the Streets as His Gallery

JR is a French photographer, graffiti and street artist who carried out many crucial art projects which actually touch on public spaces, cities, society and the collective memory.  His earlier work started with an interesting incident in Paris subway: He found a camera; then started to record the graffiti art in the streets of Paris. Later on, he travelled all over Europe to speak about the experiences of the street artists and the importance of the streets and outdoor spaces as art galleries which is the main idea shaping his later works.

JR, in very simplistic terms, takes portraits of people and pastes those pieces of photography on buildings in many different cities around the world since 2004. However, his works obviously go beyond that.  In his terms; “JR owns the biggest art gallery in the world.”  Through those street art projects, which I found very influential about him, he pulls ordinary people walking in the streets into a taste and an aesthetic joy while conveying very critical messages which have social and political implications.

One of the most challenging works of JR is, also the biggest illegal exhibition, Face 2 Face is created in eight different Palestinian and Israeli cities to question the conflict between them. The portraits of Israeli and Palestinian people, who are actually very much alike, pasted up face to face on the Separation Wall to criticize why people have such prejudices and unnatural borders while they have so many things in common in a place at the intersection of Judaism, Christianity and Islam.

The other impressive project of JR, Women are Heroes,  which raised the question of violence against women especially in those places where there is conflict and extreme poverty such as Kenya, Liberia, Brazil, India and Cambodia. JR says that within this project, he aimed to “make those stories of women travel around the world.” The huge portraits of women who are usually the most affected victims of political, ethnic and religious conflicts and patriarchy are posted on different public spaces and reflected those problems through the emotions which one can see in those women’s eyes.

Wrinkles of the City, is another artwork of JR that I personally have the chance to see some of the examples of it in my hometown İstanbul, aimed to image the ageing both in the cities and its inhabitants within the framework of collective memory and socio-economic change. Along with İstanbul, project is conducted in Havana, Berlin, Los Angeles and Shangai. As I know from İstanbul, those cities are changing very rapidly from their historical texture to a more modern but chaotic structure. Through wrinkles of the elder inhabitants of those cities, JR illustrated the changing architecture and the marks of the time on space within both people’s and cities’ memories.

Therefore, his art and activism freely, in lawful terms illegally, communicate people through buildings and walls and attract people with regard to the concepts such as identity, freedom, peace and conflict. He carried out many exciting art projects in Middle East, Africa, South and North America as well as Europe to make people ask questions on representation, violence, history and the city itself.

You can learn more about his project from his website: http://www.jr-art.net/