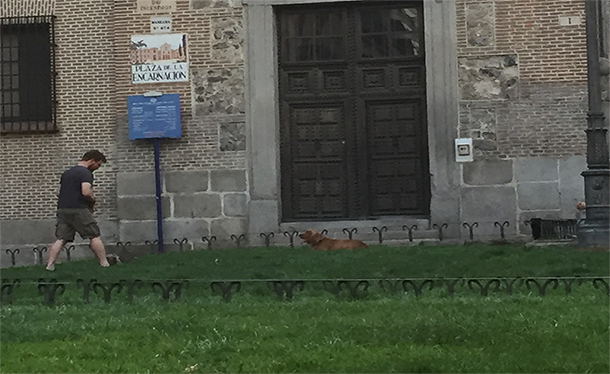 At first glance, Kira and Dalia look like any other house hold pet. They are well fed, well groomed, and go on walks daily with their owners Patricia and Manolo Morcillo Mostaza. Anyone could easily assume that the two dogs came into the family as small puppies but that is far from the case. Kira and Dalia were adopted.

Patricia and Manolo along with their daughter, decided that they needed a dog to complete their family.

Spain’s adoption rate of abandoned dogs has not increased in the past two years. In 2015, Spain had more than 137,000 cases of animal neglect on register. Of the 137,000, only 104,501 of the animals were dogs while the rest were cats. Only 44% would be adopted, while the others would be euthanized.

“Neglection of dogs is most common in the hunting season,” said Manolo. “They would buy and train hunting dogs, such as a grey hound, to hunt with. Once hunting season was over, people would abandon them. This is especially true, when the dog gets injured or something happens to were they can’t hunt anymore.”

It was reported by Affinity Foundation, that 66% of the animals entering in a animal shelter have actually come off of the streets. For Patricia and her family, it was better to adopt a dog from a shelter, than it was to pay money for a puppy. While caring for an older dog has issues in and of itself, such as behavior problems or any injuries they sustained while out on the streets, the family felt they were better off getting a full grown dog. To them having to rehabilitate and care for a dog was better than having to train and take care of a puppy.

With this in mind, Patricia’s daughter started looking up animal shelters on the internet. When she discovered El Refugio, a popular animal shelter in Spain, she started searching around for a dog to add to the family. It was then that she discovered a picture of two dogs that she really liked. One of them was Kira.

“When we first saw her [at the shelter], we didn’t recognize her,” said Patricia. “She was so thin.”

The family fell in love with the dog anyway and decided to bring her home. She had been apart of the family for nearly two years before the family decided to adopt again, but this time Patricia wasn’t so skeptical. In fact, she was the one to discover their next dog.

Both dogs were skittish when they first arrived. They were full grown, but because they had been abandoned they were constantly nervous around their human caregivers. Kira never bark for a full month, until Manolo came home and sent the pup into a frenzy.

“My daughter thought she was mute,” said Patricia, “So when she first bark we were like ‘what is happening?’”

Dalia took a little longer to get use to her surroundings. She didn’t answer when called, she was nervous all the time and had to be trained.

“They say that, in the end, they [adopted dogs] are really loving and part of the family,” Patricia said. “I agree.”