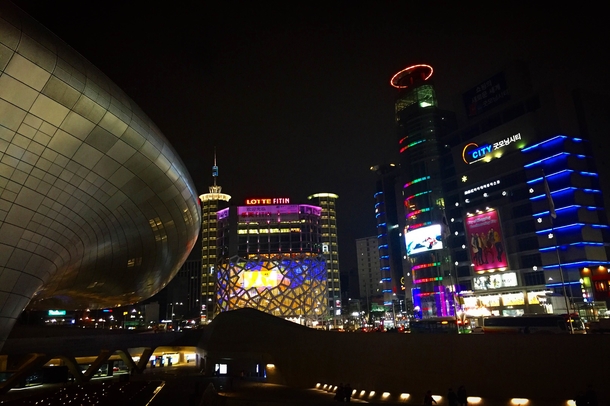 A Condensed Guide to Social Night Life in South Korea

“One shot!” is the common phrase you will hear as you sit staring at a freshly poured serving of the Korean liquor soju in your hand, slices of fatty pork-belly sizzling on the grill in front of you, and the pungent smell of garlic in the air. Your companions will all raise their glasses and down the sharp, burning drink which is usually followed quickly with a guzzle of beer or piece of the delectable meat from the grill. If you are interested in South Korea, planning a trip there soon, or thinking of possibly even moving there, this is a natural scene you can expect to be a part of, commonly referred to as “Barbecue.”

Barbecue restaurants are very common throughout South Korea and they are one of the most popular spots to hit up at night with a group of friends before beginning your evening debauchery or even to vent your stress away with coworkers. However, this is just the beginning of what social night life in Korea has to offer. Sampling unique Korean cuisine (such as the fermented cabbage dish kimchi), winging your way through Baskin Robins 31 (as well as other Korean drinking games) at the bar with new friends, and singing the night away to popular English (or if you´re feeling particularly ambitious–Korean) jams are just a few of the reasons why you should spend a night out (or more) in South Korea.

Back in 2014, Korean pop sensation and world renowned musical artist Psy (YG Entertainment), best known for his hit “Gangnam Style”—released a single along with Snoop Dog titled “Hangover” with an accompanying music video that is pretty much the perfect depiction of nightlife in Seoul. If you haven’t seen it, I highly recommend that you check it out. In reality, you probably won’t get to experience the perfect domino effect of soju shots tumbling into glasses of beer (this combination is popularly known as somek) as shown in Psy’s music video, but I guarantee you will see numerous weary victims of the night downing bottles of miracle hangover cures (herbal/vitamin drinks) while slurping up the noodles of spicy ramyun (ramen) in convenience store windows (also shown in “Hangover”). Fear not, this is all part of the process.

Expats in Korea have an extensive online network for socializing and assisting each other. The community online is very friendly and helpful, whether you are planning on living there or just stopping by for a visit. Facebook groups such as the Bundang Social Club (BSC)—which consists of expat and community members of a city just south of Seoul—frequently posts events, recommendations, and local specials. Other groups, like the HBC/Itaewon Information Board (for Seoul) and Expats in Busan (for Busan) are also good to checkout if you are visiting or moving to those areas. Meetup.com likewise lists a number of community groups you can join (checkout Friends in Korea, GlobalSeoulMates, and The Busan English Party). Additionally, both  Adventure Korea and Seoul Gone Wild organize events to help optimize your time in South Korea.

Top 3 Activities for a Typical Night Out in South Korea 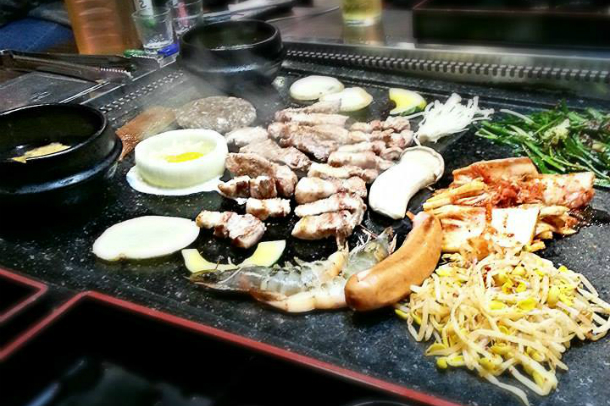 1. Barbecue – As mentioned before, a common way to kick off the evening is to head to a Korean barbecue restaurant to grill up cuts of meat at your own table, surrounded by numerous traditional side dishes like gyeranjjim (steamed egg), kong namul (soybean sprouts), and eomuk bokkeum (stir-fried fish cake). Different regions of South Korea offer variations of barbecue, but the most common item found on the menu is strips of fatty pork belly called samgyupsal. Be sure to order some beer (maekju) and a few bottles of soju, too. 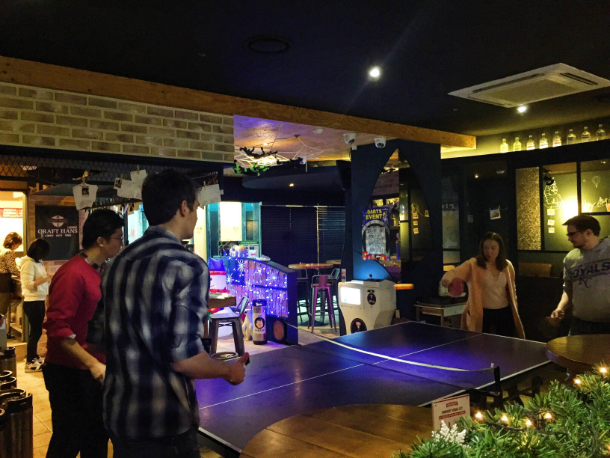 2. Bars – There are many different types of bars in South Korea where you can meet locals or socialize with other waeguksaram (foreigners) from all over the globe. Bigger cites such as Seoul will have western-styled pubs that typically offer a wide selection of beer and liquor as well as food menus, bottle bars (also known as “cooler bars”) which range in size and coolers lining the walls, filled with bottles of beer, and then there are HOF (Korean term of German orgin) bars, which offer a range of beer and liquor (including makkgoli—a sweet Korean rice wine) as well as snacks. Each type of bar can give you a unique experience, and it is not uncommon to hit them all up in one night out. 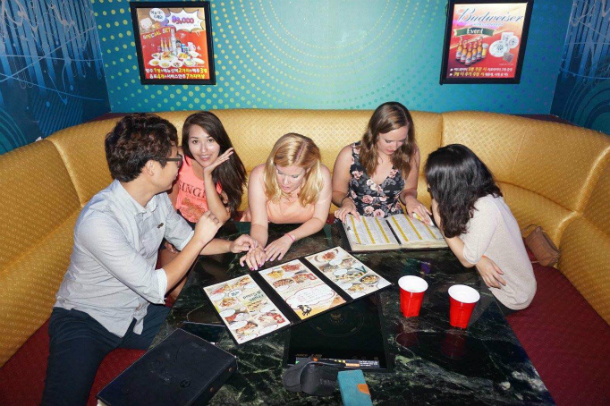 Friends at a Singing Room in South Korea | Jenn Keller

3. Norebang – Bust out your vocal skills in a private Karaoke room (called norebang) with friends. These “singing rooms” found all over South Korea range is style, size, and variety but they all share a similar philosophy: no judgement. It doesn’t matter your ability to hold a note (or lack thereof)—while participating in norebang, everyone sings, bangs tambourines, downs more bottles of beer, and occasionally passes out on the comfortable seats. It might seem intimidating at first, but as soon as you get the group together attempting to harmonize an uncoordinated rendition of “Hey Jude”—you’ll be hooked, and singing until the sun rises.

Not all nights out necessarily have to involve watching the sun rise, but the events discussed in this article are based on my own experience living and working in South Korea for over two-years as well as the incite of others who have survived South Korea’s crazy social night-life. They are something which you are highly likely to encounter if you go out during your stay there (not to mention, definitely encouraged not to miss). The best part about being in South Korea is the people you are able to meet—both foreigners and natives. Don’t be shy, make connections, and let them be your ultimate guide to the best night out.