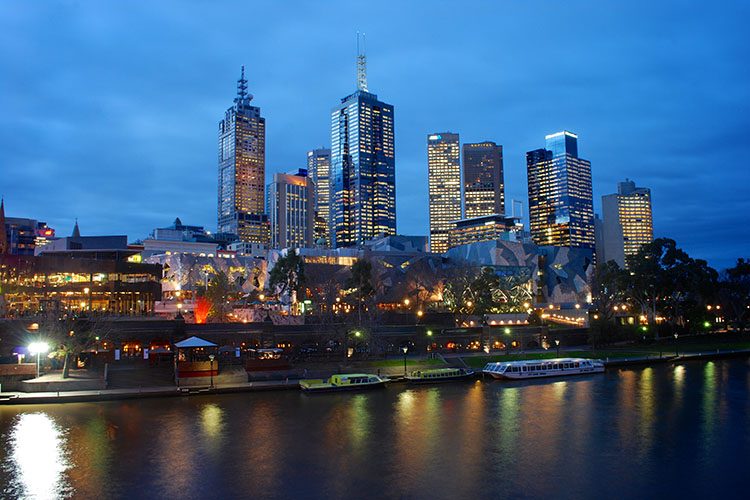 Working Abroad in Australia: My First 30 Days in Melbourne

This article is the second in a series titled “ChroniclOZ” by Matteo Fabi, co-founder of  the blog Blobally, who will be working abroad in Australia for the upcoming months. Read the first article in the series here.

I just celebrated the first month of my new life. After three years in London, I resettled in Melbourne, Australia. I came here with a Working Holiday Visa, with the intent of living a new adventure down the southern seas, but also working and saving on the way, in order to keep on travelling afterwards. Let’s draw a line after the first 30 days.

“Vires acquirit eundo” is the Latin motto shown in the coat of arms of the City of Melbourne: it means “She gathers strength as she goes”. Founded as a speculative settlement by British explorers in 1835, and declared a city by Queen Victoria on June 25, 1847, it broke away from the New South Wales state, becoming the capital of the newborn state of Victoria in 1851. The Victorian gold rush during the 1850s made of it one of the wealthiest city in the world.

Nowadays, Melbourne is considered not only the most buzzing town in Australia, but one of the world’s most liveable cities, topping the charts in education, entertainment, health care, research and development, tourism and sport. It is also considered the Australia’s “cultural capital”, being recognised as an UNESCO City of Literature.

I could perceive this since I first stepped into the State Library of Victoria, a massive and elegant building at the very core of the Central Business District (CBD), where, as a backpacker, I first went seeking wifi connection. The CBD itself is the bustling heart of the town, boasting futuristic skyscrapers, home of a well-fed class of white collars, and many sparkling shops and restaurants.

The city centre also harbours the Flinders Street Station, the major railway hub, and the other fours stations of the “City Loop“: in Melbourne, the metropolitan train service is concentric, rather than a web, and to move from a line to another you always have to go through the Loop. Alternatively, you can rely on the world’s largest tram network, which includes a “Free Tram Zone”: basically corresponding to the CBD, is the area where you can jump on any tram at no cost, as long as you move within.

For all the other journeys, the system is really simple and defined: within the metropolitan area (zone 1-2), every single ticket costs $3.90, and after the second one in a day, totalling $7.90, it automatically becomes a “Daily Ticket”, which comes for the same amount. A 7-day pass costs $39. All the tickets have to be paid through the digital MyKi card, which is the equivalent of the London’s Oyster Card and costs $6 (unfairly not refundable at the end of your potentially short visit).

Although unfolding upon an uneven territory, Melbourne is definitely a bike-friendly city, and that’s the way I would suggest to explore it. Every road has its bike lane, and you can find many racks to lock up your cycle. A service of bike sharing is also in place, but I would absolutely recommend an experience I tried first hand: the BikeShed at the CERES Environmental Park. Run entirely by volunteers, this is an on-site group which gathers dismissed bikes around the town, and then teaches people how to fix them. In my case, given I had no experience at all about cycles maintenance, I literally picked a cycle’s frame and, with the volunteers’ support, found piece by piece all the second-hand parts which, in 6 hours of work, combined till I had my bike ready to go! The price? $10 for the year membership ($5 for students and unemployed), and, in my case, $10 for two brand new cables we couldn’t find among the discarded parts and I had to buy from them. This is the magic: as long as you become a member and find the parts you need among the recycled ones, you can put them together and take your bike with you at no extra cost, being also entitled to come back for maintenance any time you need. Plus, you get a priceless knowledge, since they don’t do the job for you, but teach you how to do it yourself.

Finding your place in the Suburbs

Assuming you have either your blazing new (second hand) bike or your Myki weekly pass, you are ready to explore the inner suburbs of Melbourne. The eastern part represents, as in London, the hipsters’ heaven: Fitzroy, Richmond, Collingwood and South Yarra are meant to be the coolest spots in town, rich in trendy pubs and clubs. Here, you are likely to bump into accurately ruffled students or exuberant young professionals, cheering up the atmosphere of the streets seven days a week. Southbank represents the classic walk-along-the-river, very fancy and quite close to the CBD. The Docklands, too, have been recently brought to new life, and now consist in a series of visionary buildings where professionals find a place comfortably close to their office.

Moving farther from the city centre, neighbourhoods of growing interest are Carlton North, Brunswick East and Coburg. Once neglected as low-income, multi-ethnic boroughs, they more recently got hit by the gentrification wave which, across the entire globe, takes the so-called “creatives” to refurbish dismissed areas, in the endless quest for a more radical chic place to be.

Beyond this inner circle, the city is still enjoyable, usually quieter, but also greener. As usual, the cost of a room to rent is defined by the trade-off between nightlife, transports and amenities. Personally, I have been really lucky, since I got in touch with a friend met during my trip to Nepal in April 2016, which eventually happened to be my flatmate/landlord. She had a spare room in her two-bedroom flat in Collingwood, which I pay $200 p/w, bills not included. This is honestly a friendly price, considered the area and how the house is furnished, but can be anyway considered the average price for a fairly decent room.

Quite widespread is also the practice of hosting through Couchsurfing, which is the way I found accommodation during the first week. Couchsurfing is an online platform where travellers can connect with locals willing to host without any charge, just for the pure pleasure of sharing their lives, their hobbies and their homes. It is a beautiful way to get into a new environment, as no one can introduce you to a place better than.. the people who live it! My experience so far has always been positive, since, I guess, anyone who opens the door to a complete stranger has to be an interesting, joyful and open-minded character.

Finding a job has not been as easy as it was meant to be. At least, finding a job I was barely interested in. I actually thought I did, when, after a week since my arrival, I got hired as a street fund-raiser by an environmental Ngo. They paid $22 p/h plus commissions, which is not bad, but also forced me to work as if it was a pure sales-driven job: they wanted to see the bloody money. In the context, they wanted me to literally bother people down the streets, levering on their supposed sense of guilt towards mother nature. Since I am not a salesperson, I just dropped after a couple of days.

After two years working for Zara in London, I thought I could easily find my place there, as there were even vacancies available. I went to talk directly with a Store Manager, but she politely explained me they do not hire people on a Working Holiday visa. I guess they are not the only ones following this policy.

Talking to people, especially with other foreigners living my hybrid form of long vacation, I came to understand that hospitality-related jobs are much easier to be found: waiters, chefs, baristas or bartenders are all welcome. If you have this kind of skills, it won’t take long to find a job in town, but if you end up working in a place where alcoholic beverages are served, you will need to attend a 4 hours course in order to get a RSA licence (pay attention, as every Australian State requires its own RSA).

I ended up finding occupation with a Inventory Service company which I already used to work for, both in Italy and the UK. It granted me a good salary and, at the beginning, a fair amount of hours, which are now unfortunately diminishing, forcing me to come back again on the job market. Fair enough, it means I am going to enjoy some more the “holiday” side of my visa.

In the next posts, I will take you hand in hand, and we will live together this journey through people, places, and life.

Have you recently moved abroad to Australia? Do you have any useful tips for those interested in working abroad in Australia? Feel free to comment below!