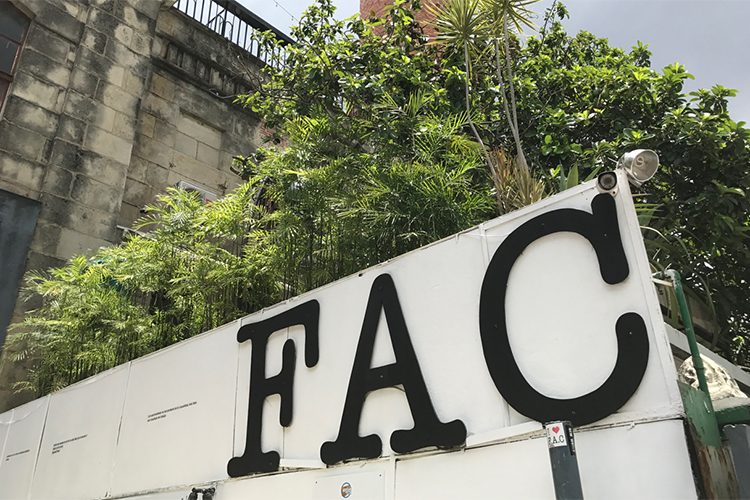 Shana-Kay HartJuly 25, 2017
CubaTravel0 Comments 0
The following article is published in the #RGNNCuba Magazine: Vol. II, Summer 2017, produced during ROOSTERGNN Academy’s Travel Journalism & Photography Internship Seminar in Havana and Trinidad, Cuba, under the editorial direction of RGNN Expert and Mentor Benjamin Jones. Follow #RGNNCuba for all of our Cuba coverage.

As the sky darkened, a single drop of rain slipped from the leaves of the looming trees. The Cuban sun had retired for the evening, signaling the end of another scorching hot day. I inched closer to the front, slowly but surely making my way to the entrance. The tightly packed crowd looked expectantly at the security guards. One by one, then two by two, the line grew as the classic cars, which Cuba is known for, pulled up, letting off well-dressed patrons one after another.

I looked to my left and made eye contact with one of the friendly doormen, Osmani Gutierres, who has been working at the Fabrica de Arte Cubano, or F.A.C., for just four months as part of the outside security team. He said his favorite aspect of the job is the people.

“The people who visit are all very cool, which influences the environment and the energy inside.” When asked his opinion of F.A.C., Gutierres answered: “It is interesting because it is a place where creativity and imagination can be seen at work.”

Finally, the clock struck the magic hour of 8 p.m. I glanced up above at twinkling lights that welcomed me to “La Fábrica” as the locals refer to it. After advancing past the security guards dressed in well-fitted black ensembles, I was handed a business-like card as my ticket, which I later discovered would keep track of the drinks and food items consumed to pay for at the end of the night. The secret here is that if you are unfortunate enough to lose that card, you will be required to pay the amount of 30 CUCs (around $30).

I secured my ticket and turned the corner. At my left stood a bar, one of five distributed throughout the establishment. I watched the bartenders before me, mesmerized by the quick tricks and spins they seamlessly performed. Snapping back to reality, I continued along the outskirts of the rooms, using the long and narrow hallways as my maze.

Before becoming the hip and new hang out spot for locals and “extranjeros” alike, La Fábrica was a sunflower oil processing plant, evident from the remaining structure and architecture of the old factory. 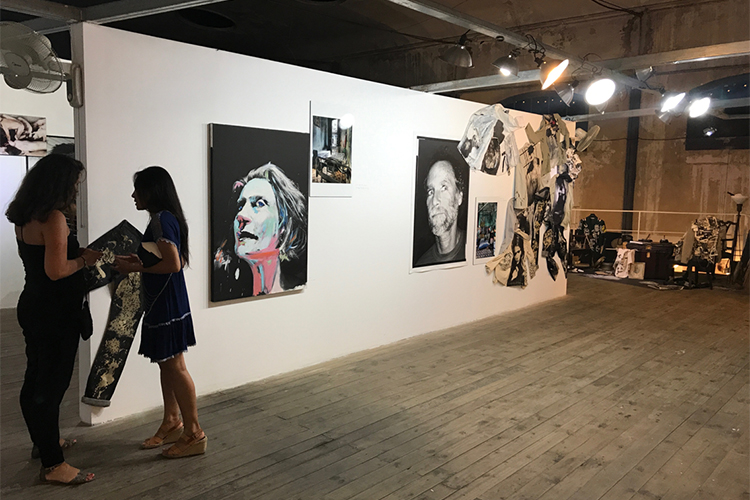 Walking through La Fábrica, it was easy to witness what Osmani had told me. As I wandered room to room, I noticed the different art in each, all of various mediums. I had become so entranced by everything I saw that I even took a picture of a bench, mistaking it for “art,” because it was in fact just that.

What your typical museum lacks, F.A.C. excels in providing, which is diversity: from its featured art to all its visitors. It is not your typical art gallery. La Fábrica effortlessly oozes “cool” vibes. With each room featuring different works of art, including the name and contact information of its creator in case a patron wishes to make a purchase, I felt as if I had been transported to somewhere out of this world for the night. 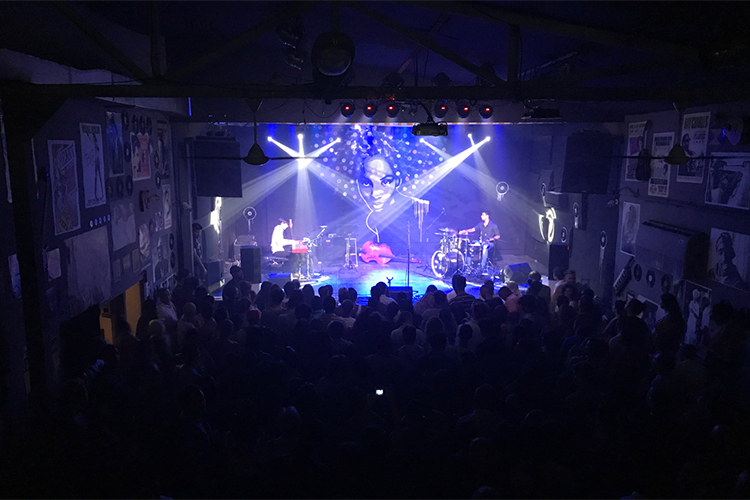 I continued to progress as did the time. By now it was a little past nine and La Fábrica was swarming with visitors. On my way upstairs, I paused to speak to another security guard, hoping to get more insight from someone on the inside.

Rene Silva was eager to talk to me about La Fábrica. After hearing about the project a few years ago and enjoying F.A.C as a visitor himself, Silva decided to take a job here a year ago. What makes F.A.C. quite unique, he explained, is that “it is a place where all forms of art are located all in one place; essentially all forms of art are functioning in the same place.”

After seeing my interest, I was treated to a tour around the lower level where I was able to see more than the art on the wall, but also stores that sold clothing and a display of exquisite jewelry for sale. I was happy to discover that it is considered the most important cultural center that there is in Cuba.

When asked why he prefers to work at La Fábrica, he professed that the environment attracted him because it is a “different” ambiance. “It is a mix of everything and that is what differentiates it from other galleries because there are movies, theater, music and art all in the same place and it embraces all types of art.” After chatting for almost an hour, I left with intriguing information regarding this even more intriguing place.

Silva sent me on my way, and advised me to ask for Ivan, or “El Jefe.” Climbing the fairytale-like stairs, I entered the rooftop setting and made a beeline for the VIP section. I sat to wait for Ivan Vergara Odelín, the head of PR & Communication of F.A.C. 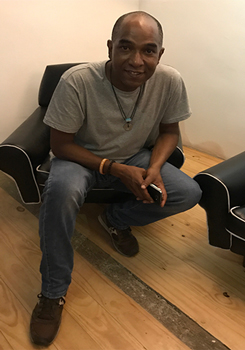 “The gallery itself opened in February of 2013 and the project’s concept of uniting all forums of art, music, theater and painting, etc., was developed about nine years before,” Odelín said, adding that he hoped that F.A.C. would influence the local art scene because it does display typical art.

When asked about the importance of La Fábrica to the Cuban community and culture at large, he stated that people should come here because it is a very creative space.

“There are very few places like La Fábrica and none are exactly like F.A.C. The people of Cuba should come because it is important for them to know the art of their own people, as art is the ID or the identification of a country.”

Many art loving celebrities have visited including Mick Jagger, Kevin Bacon, Lady Gaga, Quincy Jones, Beyoncé, and President Barack Obama and his wife, Michelle, to name a few. He declared that the team at F.A.C. is very content and grateful and that they are working hard with the objective to better the space in order to show more art, both local and international, while allowing Cuban art to travel the world as well. 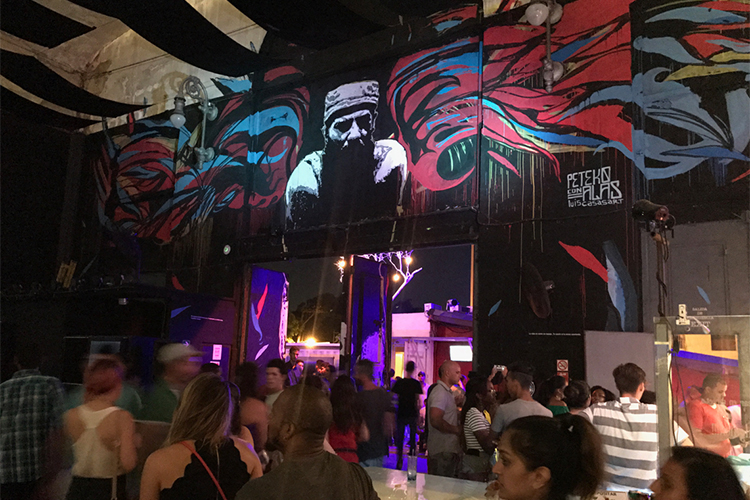 Visitors enjoying one of the multiple bars inside | Shana-Kay Hart

Visitor Sherry Dames, 45, of Washington D.C., said she heard of F.A.C. through social media and decided she had to visit, after hearing many great things of the spot. “I didn’t know what to expect, I was told it was a bar with art and that it is a must-do activity so here I am.”

As is most everything in Havana, La Fábrica de Arte Cubano is intriguing, captivating and inspiring. When asked why she believes people should visit, she explained, “It is not for everyone. It is for people who want to have an open mind, appreciate culture and can assess something that is unique.” Something that can be said for Cuba itself.