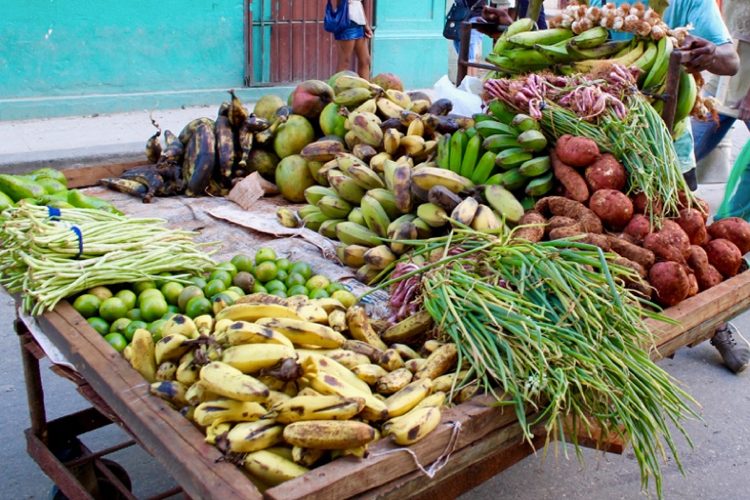 Mattison EllisJuly 26, 2017
CubaTravel0 Comments 2
The following article is published in the #RGNNCuba Magazine: Vol. II, Summer 2017, produced during ROOSTERGNN Academy’s Travel Journalism & Photography Internship Seminar in Havana and Trinidad, Cuba, under the editorial direction of RGNN Expert and Mentor Benjamin Jones. Follow #RGNNCuba for all of our Cuba coverage.

As I wandered beneath dimly lit street signs, the only brightness coming from a vibrant Che Guevara mural, I squinted at my scribbled directions with false confidence. It was raining—a perfect match to my worrisome conscious. But I grew reenergized with the smell of arroz y frijoles and the sound of broken guitars strumming Guantanemero, staples of any Cuban eatery. I would soon come to learn that Havana, an amalgamation of charisma and antiquities, invites unfamiliarity just as strongly as it projects it— including, believe it or not, a rarified vegan.

While I grew hungrier, I hoped my veganism would be welcomed in Havana like my blonde hair and light skin—with curiosity and admiration. I had recently spent five months in Sydney, Australia, a metropolis with health food shops and raw-vegan cafes dotting each of its sun-washed streets. I knew, however, my eating experience in Cuba would be a greater challenge.

“There are really no vegan Cuban natives,” said José Pantín, maître d’ at Central Havana’s La Concordia, a charming restaurant with impressive rooftop views. “But there is a growing interest in agriculture and the environment, especially with composting,” Pantín added, “And with the increase in tourism, I have seen more visitors interested in eating vegetarian and vegan foods.”

Lunch at La Concordia quickly became part of my daily routine in Havana, each afternoon enjoying fresh soup, pasta with vegetables, and of course, arroz y frijoles. Dedicated to delivering a modernized Cuban dining experience to its customers, the bistro also hosts salsa dancing and live music every Friday and Saturday night. 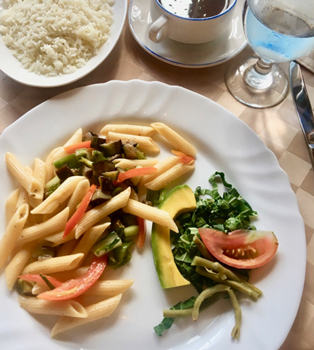 The accommodating nature of La Concordia is matched by nearly every paladar (privately-run restaurant) in Havana, where chefs are more than happy to cook plant-based meals. Not only are the waiters helpful with pointing out vegan options, but some places will prepare custom meals for a reasonably low cost. Of course, if you want to play it safe, I recommend loading up on some lightweight cruelty-free snacks (my favorites being Primal vegan jerky strips and NuGo protein bars) before your trip.

“I do not really like vegetables,” admitted Junior, a waiter of eight years at Fenix Dorado in Havana’s Chinatown neighborhood. “But Chinatown restaurants are having more and more vegan food because of more vegetarian and vegan tourists,” he reassured me. Despite the neighborhood’s colorful pagodas and Mandarin signage, Havana’s Chinatown exhibits more of a mixing-pot-styled cuisine of Chinese, Italian, and Cuban dishes. Fenix Dorado offers a generous selection of vegan fried rice, boiled Cuban root vegetables, vegetable chop suey, fried plantains, and more.

Vegan world traveler and author of The Health Voyager’s Global Kitchen, Carolyn Scott-Hamilton, defends the attainability of a vegan Cuban diet. Growing up in Miami, a city known for its Cuban influence, Scott-Hamilton has learned to modify authentic dishes like empanadas and Cuban sandwiches with plant-based ingredients.

A 2016 poll of United States dietary customs* reported that 38% of Hispanic individuals often eat plant-based meals when dining out. But while the majority of Latinos stick to carnivorous dishes, the most popular in Havana being ropa vieja ( a dish of shredded beef, chicken or pork), many of its countries’ crops have grown popular amongst health enthusiasts in the United States. In the most recent past, the Brazilian acai berry and the Peruvian quinoa grain have secured their places in smoothie bars and trendy coffee shops across America.

Meanwhile, Cuba boasts its own variety of farm-fresh produce—including pineapples, papayas, and mangoes—just to name a few. And in Havana’s farmers’ markets, one can find more unique crops, like the national mamey fruit and white-fleshed chirimoyas (custard apples) both commonly used in jugo de frutas naturales. More of a veggie-lover? Fear not, as Cuba also yields an abundance of vegetables, including the malanga, a starchy root vegetable typically served boiled and mashed.

My first recommendation to any vegan tourist in Havana, after abandoning any preconceived notion that Cuba is a distressed or unfriendly place, would be to get lost in its unpaved city streets. Each morning, the roads transform into makeshift farmers markets with street vendors selling local harvests from the back of their motorcycles.

And if the Cuban coffee is too strong for your liking, you can opt for the sweeter Guarapo Frio drink sold at state-run food stands for 1 CUC (or around $1). Made of freshly pressed sugar cane juice, a serving of Guarapo Frio promises a refreshing cure to the unrelenting Havana humidity. For a persistent sweet tooth, I recommend trying the surprisingly vegan croquetas carameladas, caramelized truffles with coconut filling found in Havana bakeries and dulcerias on busy afternoons. 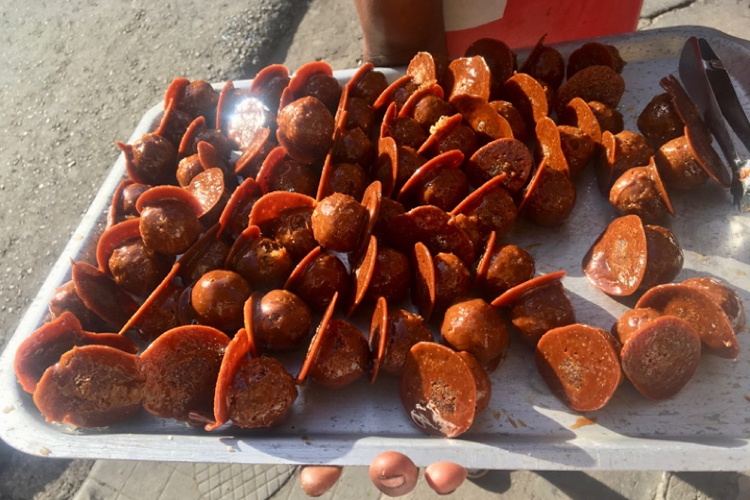 Sinking my teeth into the sweet croqueta, the last treat of my Havana adventure, I found myself free of the reservations I once had about Cuban cuisine. I had begun the trip unsure of how I would have to adjust my diet, unaware of the country’s culinary diversity. But now, as I denied my unwanted departure, I reflected on the extraordinary cooperation and enthusiasm I had experienced while eating my way through Havana, best characterized by Pantín’s daily sendoff, “See you tomorrow for more healthy food.”