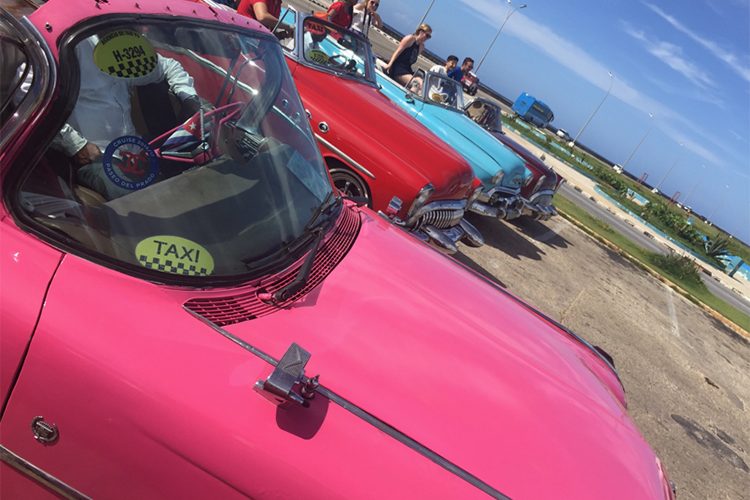 Alain Santana drives tourists around in a 1954 Buick. The old-fashioned cars paint a colorful picture that brightens up the city of Havana. | Stacey Blansky

Cubans Count on Foreign Tourism as Private Sector Opens Up

Stacey BlanskyJuly 31, 2017
CubaTravel0 Comments 0
The following article is published in the #RGNNCuba Magazine: Vol. II, Summer 2017, produced during ROOSTERGNN Academy’s Travel Journalism & Photography Internship Seminar in Havana and Trinidad, Cuba, under the editorial direction of RGNN Expert and Mentor Benjamin Jones. Follow #RGNNCuba for all of our Cuba coverage.

As you stroll past rows of now decrepit Spanish colonial buildings, whose faded pastels serve as a reminder of how the once glorious Cuban capital has seen better times, you may not realize that a new economic era is dawning thanks to curious travelers like yourself.

The evidence is everywhere.  When you walk past La Bodeguita Del Medio bar, packed with bodies swaying to Latin music, you may stop in for a refreshing mint mojito.  Perhaps before you get a bite to eat at one of the paladares, or locally-owned restaurants, you will first purchase some handicrafts at one of the many souvenir shops lining the streets of Old Havana.

And f you have not been to the city, now is the time to go.  Many travelers are hesitant to step foot onto the communist-run tropical island.  After 60 years of strained relations between the United States and Cuba, perceptions are often falsities, harbored by many Americans.

According to the Ministry of Tourism, Cuba received 4 million international visitors in 2016, which was a 13% increase from 2015.  Europe and North America were most responsible for this result, and a there is a projected increase of 100,000 American visitors for 2017.

As a potential tourist, you may wonder what locals truly think of visitors, especially if you are an American and ponder the political costs of traveling to this seemingly esoteric land.  Many small business owners and local workers are enthusiastic to speak about their appreciation for a wave of new visitors from the United States, who contribute culturally and economically to the city. 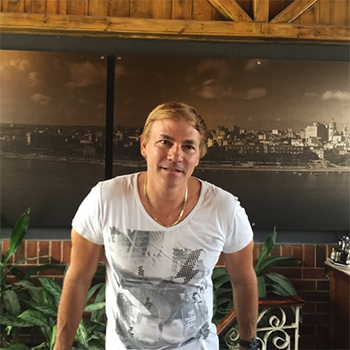 Alejandro Robaina poses for a picture at La Concordia restaurant. He enjoys walking around the eatery and interacting with the foreign diners. | Stacey Blansky

Alejandro Robaina, owner of the La Concordia Restaurant and Hostel in Central Havana, discussed how the political shift under the previous Obama administration played a huge role in the prosperity of his business.

“Oh, my god, it was great.  Since Obama opened relations with Cuba, I see now that it would be a mistake to take back all the good things that he did,” he said.  “The people were excited when that happened.  He is making history.”

Robaina explained that previous historical tensions between the two countries were more focused on relations between the governments, and are less about the people.  He said that past events should not impact a traveler’s decision to visit Havana now.

“I think the American people will always be welcome here, and they enjoy that.  I see Americans every day and I can see it on their faces,” Robaina said.  “They are so happy.  It is like a dream come true to be in this beautiful and amazing city.”

Robaina mentioned how confusing it is that Cuba is within close proximity to a prosperous, democratic superpower yet still suffers from poverty.  The mutual relationship between tourists and locals in Havana is twofold; the juxtaposing of two vastly different cultures encourages the understanding of shared community, and the economy in Havana is greatly bolstered by the new travelers.

Alain Santana, who ferries tourists around in his 1954 Buick, explained that tourists, especially Americans, are extremely welcome because they help fuel the economy.

“Americans are the best tourists all over the world, and now it is really good because they are coming more,” Santana said.  “You are really friendly people and, in my opinion, always good customers.”

Santana explained that by reestablishing ties with Cuba, Obama had opened doors for small businesses in Havana, which thrive on customer service.  He also said that Americans are particularly good visitors because they spend more money and leave great tips.  He advised that Americans should not be hesitant to visit Cuba due to any preconceived notions of the country.

“I would tell Americans that we are really safe,” Santana said.  “We are a friendly people with a really rich culture and history.  We have a lot in common with you, with Americans, in general.” 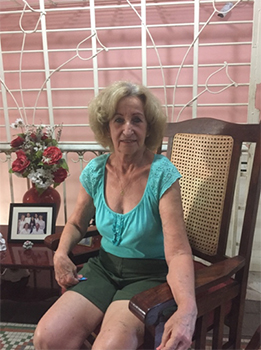 If you are coming to Cuba and looking for the best prices, you will likely be recommended to stay in a casa particular, a locally owned, “bed-and-breakfast” style living space.  Lupe Rivera, manager of Casa Amada in Central Havana, explained that she meets new people every day and discovers new cultural values from all over the world.

“You always learn from everybody, and you also learn more about your own culture,” Rivera said.  “I try to help everybody and so every day I learn things.”

She dislikes the fact that newspapers tend to say whatever they feel, even if the messages they convey are untrue.  This is particularly relevant in the United States under the new Trump administration.  President Trump warned that unless the Cuban government makes some political concessions to the United States, he might scrap the whole normalization process initiated by Obama in December 2014.

“Sometimes they [tourists] have a wrong opinion about Cuba and I tell them how life is really like here,” Rivera said.  “They come here to know about Cuba because sometimes newspapers say so many untrue things.”

Rivera preferred not to mention what foreign media sources express about Cuba, but she insisted that travelers should come to Havana and see for themselves what the city has to offer.

As you can see, there is a clear commonality among the opinions of the locals in Havana:  they are all extremely welcoming and would love to see more American tourists.  If you are an American, you should not feel hesitant to visit the country; definitely do not discount the powerful impact you can have on the Cuban people and economy.  Locals would love to have your enriching cultural presence and valuable economic influence.