Traveling with Allergies Abroad in Cuba

Jordan HartJuly 30, 2017
CubaTravel0 Comments 0
The following article is published in the #RGNNCuba Magazine: Vol. II, Summer 2017, produced during ROOSTERGNN Academy’s Travel Journalism & Photography Internship Seminar in Havana and Trinidad, Cuba, under the editorial direction of RGNN Expert and Mentor Benjamin Jones. Follow #RGNNCuba for all of our Cuba coverage.

My stomach rumbled in complaint as I looked with despair down at the remaining corn tortillas and tuna packets; this was what I had to live off of for the next two days on a visit to Haiti. The cook’s words that my mother had repeated rang in my ears, “Get that white woman out of my kitchen.” I had planned to cook, I hadn’t planned on a caste system that made it impossible for me to do so, and now I was nearly out of food.

I recently spent a week in Havana, Cuba and, despite the language barrier, was able to safely eat out and experience the city through its cuisine. While my allergies are only gluten and dairy, these tips apply for all types of dietary restrictions.

Breakfast has been called the most important meal of the day, and the owners of casa particulares, Cuban bed-and-breakfasts, treat it as such. These casa breakfasts are quite large and normally include an array of fresh, organic fruits such as mango, pineapple, guava, and banana. There is also bread with guava jam and butter, the world-renowned Cuban coffee, crepes and eggs. Fruit is obviously a safe breakfast choice but I was also able to get scrambled eggs every morning, I just needed to specify that they be made without milk or sin leche.

I spoke to the woman in charge of the casa where I stayed, Casa Amada. Lupe Rivera said, “about 30 people per year come through the casa” with dietary restrictions, however, most of those restrictions come from vegetarians, rather than visitors with allergies. To accommodate, those guests get more fruit and juice at breakfast. “Everyone can eat fruit” she said with a shrug.

Even though Cuba is full of eateries, picking a restaurant for lunch can be a daunting task. One place I visited frequently for lunch was La Concordia, located in the Central district of Havana, or Centro, as it’s known to locals. The modern décor and inviting breeze made up for the four flights of stairs to get there. The establishment caters almost exclusively to tourists. “The prices are not affordable for local incomes” Jose Pantín, the maître d, explained. 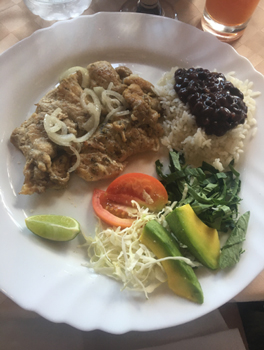 This lack of awareness seemed to be standard in every restaurant I tried. In both Haiti and Cuba, the words of Benjamin Jones, a travel journalist with many years of experience all over the globe, rang true, “Allergies are a first world problem.”

Iberostar Parque Central Hotel has a beautiful, formal restaurant. I thought if any eatery in Havana would know about food allergies, it would be this one. However, when I asked the waiter about allergies, he simply said “I don’t understand.”  Despite that, I was still able to safely get a great meal of beef tenderloin with rustic truffle potatoes, although I did have to pick off a bread garnish.

I was not always so lucky. One of my first experiences dining out proved to me why it is always important to carry a granola bar in my bag. I ate at the café inside Hotel Sevilla, a beautiful and popular hotel. I ordered what I assumed would be a safe dish, chicken skewers with French fries. I used my phone translator to confirm that the fries were not cooked with any flour and was thrilled when I was told they were safe. However, when my food arrived there were no fries, as the kitchen had been out, instead they had substituted rice but the chicken was too undercooked to eat. 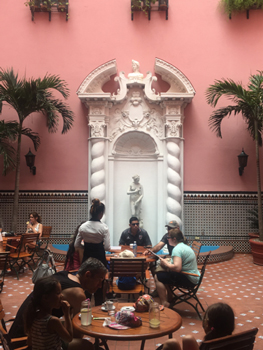 The café inside Hotel Sevilla; while the food disappointed, the view did not | Jordan Hart

My biggest tip is that anyone traveling abroad with a dietary restriction to a country with a language barrier should download an offline translator app to their phone; while this can’t make a culture more aware of food allergies, it can at least remove the language barrier. I used Google Translate, which allows you to download a language to your phone, however there are plenty of other options such as iTranslate, Lonely Planet Offline Translator, and Speak & Translate.

When all else failed, I was able to pull out my phone, type in my question, and then simply show my phone to my server. Along these lines, I would also have a translation of the foods you are allergic to save to your phone.

Not all trips will be as frustrating, and bland, as my food experience in Haiti. Flash forward to two years later, as I sat in Mexico as a waiter brought me a specially prepared, allergen-friendly desert that had been hand prepared by their chef who came out to my table to explain the dish and assure me it was safe. Not only was it safe, it was mouthwatering delicious.

Eating abroad with allergies can be intimidating, but it isn’t impossible and it should never, ever hold you back. All you need is some common sense, an understanding attitude, and a couple of granola bars should all else fail.