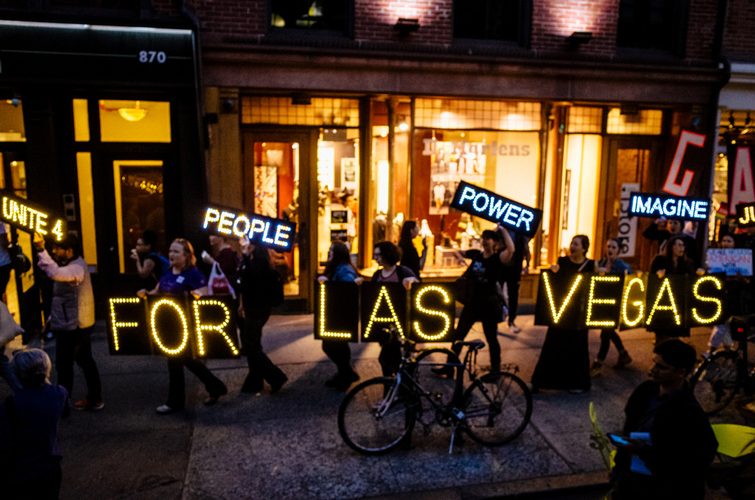 Pleas For Gun Control Continue, As Will Shootings

On October 2, 2017, Stephen Paddock killed at least 59 people and injured 527 during the Routy 91 Harvest country festival in Las Vegas. He shot at them from a room on the 32th floor of the Hotel Mandalay Bay, and subsequently killed himself.

When the police officers entered his hotel room, they found 23 firearms, and a further 19 guns at his Nevada home. But a real motivation for the shooting was missing.

The killer, aged 64, was a “multimillionaire retiree, gambler with no criminal record,” as The Washington Times reports. Now, the police has moved on to question Paddock’s girlfriend Marilou Danley if she was involved in the Massacre. Before that, ISIS claimed responsibility of the Las Vegas Massacre, a false-claim that has been dismissed as a sign of desperation, as NBC reports.

U.S. President Donald Trump describes Paddock as a “very sick, demented man.” He does not, however, address that buying a weapon in the U.S. is so easy, compared to European countries, for example. The Second Amendment of the U.S. Constitution rules: “A well regulated militia, being necessary to the security of a free State, the right of the people to keep and bear arms, shall not be infringed.”

After the Orlando shootings in June 2016, when Omar Saddiqui Matee killed 49 people inside the gay club Pulse, the Italian newspaper Post.it reported that in the U.S., it is possible to buy a firearm both in a gun shop and at a supermarket. There are some background checks, but those only take place at a gun shop, where a person must complete the ATF (Bureau of Alcohol, Tobacco, Firearms and Explosives) form, answering questions about criminal record, mental health and chemical uses. Then, the FBI checks all the answers, -in more or less one minute, as the article reports,- and the gun is sold. According to the Post.it article, less than 1% of the total number of sales are banned.

Gun control is an often-debated topic among Republicans and Democrats. Repeatedly, the approval of more restrictive laws on selling firearms has been impeded, mainly to defend the National Rifle Association, a powerful lobby created in New York in 1871, whose members filmmaker Michael Moore defined as “successors of the Ku Klux Klan” in his documentary Bowling for Columbine.

Will the Las Vegas Massacre be just another shooting that adds bodies to the growing death count from shootings? Or can it serve a purpose and change gun law in America?

A letter to the Editor in The New York Times hits the nail on the head:

“Perhaps the saddest fact about the horrifying mass shooting in Las Vegas on Sunday night is that it won’t be the last. These mass killings will continue until there is the political will to enact effective gun control measures.

If the heartbreaking massacre of 20 6- and 7-year-olds at an elementary school in Newtown, Conn., nearly five years ago couldn’t bring about that change in culture, I doubt the latest tragedy in Las Vegas will either.”

The pleas for gun control shall continue, as will the shootings.