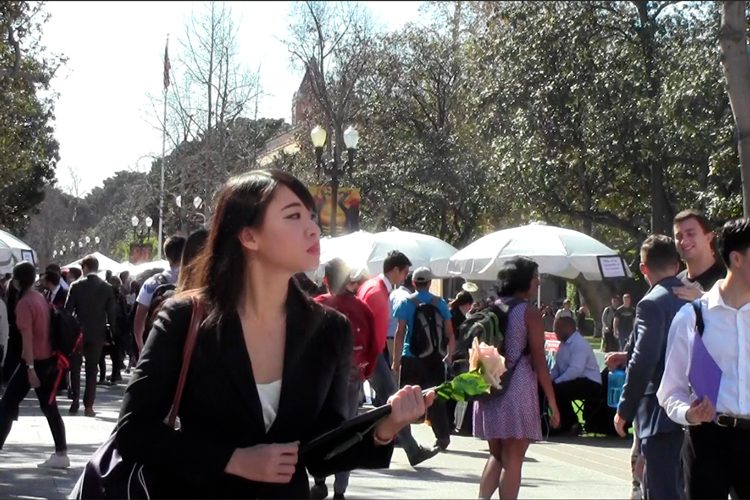 USC Spring Career Fair: Students waited for hours to talk to a recruiter that offers H-1B via sponsorships | Dongyao Nie

Raveena Mathur is lining up to attend a company info session for a summer job. Since last September, the Indian student majoring in communication informatics at the University of Southern California started to look for a summer internship, but she hasn’t got one.

The response she got this time was that the company doesn’t hire international students.

Following Trump’s “Hire America” executive order that intends to preserve job opportunities for U.S. workers last April, the demand for of H-1B visas, which allows American companies to hire high-skilled workers, declined for the first time in five years in 2017. All over the country, companies sponsored about 16% fewer visa applications than the previous year.

But international students looking for jobs say the situation is even tougher this year.

“Definitely we are concern …that is the major talk of the town that ‘maybe employers are not looking for us anymore,’” Mathur said.

Mathur comes from Delhi, India. After working as a technology profession for five years, she left her country to pursue further study and new opportunities in the United States. She dreams of becoming a user experience designer for high-tech companies such as Facebook and Google after graduation.

But she and her peers found that it was not as easy to find a job as it used to be when she came to the country. Since Fall 2017, she applied to seven companies, but haven’t heard back from any of them. Only one out of around 15 international students in her program have got one.

“My friend had an internship in December when she came to the U.S. to do her computer science master, and that was two years ago.” Mathur said, “She said she never felt stressful for job hunting.”

Xiaoheng Mao, a master student studying computer engineering at Columbia University, resonates with it. According to Mao, in 2017 at least 70 students in their program that have internship offers from Amazon, most of whom are Indian and Chinese international students. But this year, “none of the Chinese students I know, including me, has passed the first-round assessment,” said Mao. He admitted not being positive for getting a job for the coming summer.

In 2017, 199,000 H-1B applications were received, compared with 236,000 in 2016. Only 85,000 H-1B visas are given out by the nation each year. Even though the annual number of H-1B granted by the government has not been changed, it is reported that Trump’s authority is quietly strickening background scrutiny on H-1B applicants. Last year, the number of “request for evidence” or RFE by immigration authorities for extra paperwork from applicants, spiked for 44% than the previous year, which adds more uncertainty to the possibility of getting a work visa.

Mathur felt that recruiters start to lose their confidence and interests in her when she revealed her identity as an international student. “They don’t know what to do with this person. Should I talk to her? Should I hire her? They don’t know.”

Dhvani Batel who is studying electrical engineering at USC, resonates with it. The Bangladesh student said that the current political scenario, including the crackdown on other immigration groups and discussions on increasing the salary threshold for H-1B applications, brought concerns to not only students but also recruiters. “What if the government suddenly have a new rule that they can’t hire more than certain number of (international) people … That’s maybe why companies are shying away from us.”

Like hundreds of thousands of other international students, Batel is determined to make her way in the U.S. job market, fulfilling her goal to become a hardware engineer.

“Even if you give us a little opportunity, we will work very hard, because we really want that job.” With smile on her face, she said: “Every one of us should be given an opportunity in terms of equality. If we have the talent, we should be given a chance.” 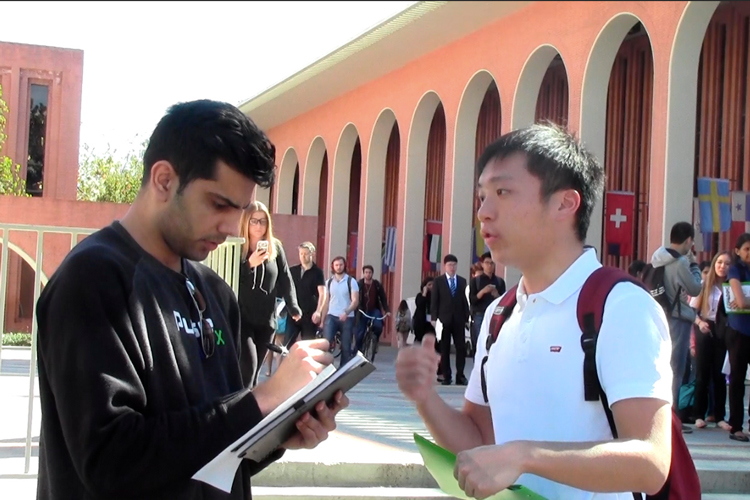 Tips to navigate the job market

On January 29th, hundreds of students at USC filled the school’s Bovard Auditorium – They are listening to a lecture about instructions for international students to look for jobs in the U.S.

Dan Beaudry, former campus recruiting manager for Monster.com and author of the book Power Ties: International Student’s Guide to Finding a Job in the United States is the lecturer.

In an interview after the lecture, he offered us “three most important advice for international job seekers”:

Have a positive mind. Now that you can’t control the policy, let the immigration stuff happen as the way it is going to happen. Do as much you can and as much you can control. If you have energies, it will help you to get success.

2. Step outside your comfort zone.

To get out and try to meet people. See if you can build connections with people in the companies that you are interested and find your ways into job opportunities.

The best strategy for any job seeker so as to reach to internalized and more available opportunities. In the U.S., so much of the hiring happens through referrals and connections.

Beaudry admitted that the visa is an extra cost for international students, but “when a manager meets someone that they really want to hire, that extra cost is not a big of a deal.”

And there are real examples that companies that originally didn’t offer sponsorship finally decide to sponsor excellent international applicants.

Therefore, he suggests students spend less time to find out which company sponsor and who doesn’t. Instead, to spend more time improving and articulating their values to an organization.

“A lot of international students are so focused on their own costs,” the experienced recruiter said, “the primary thing you have to do is focusing on what you have to offer, as opposed to what your costs are.”