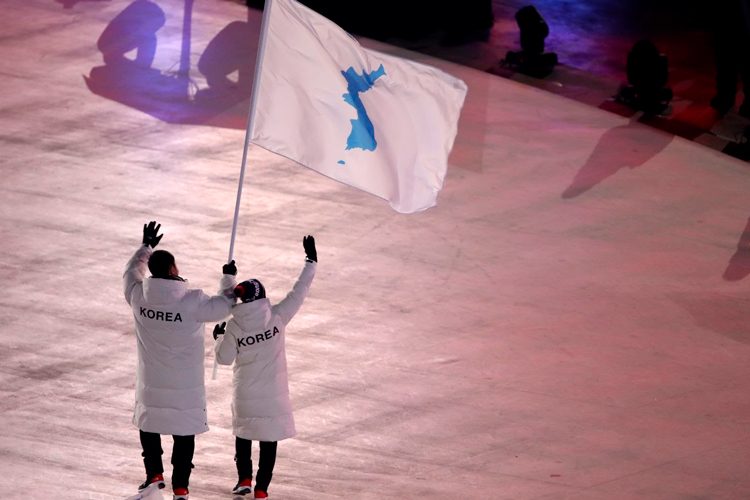 A United Korea at the Olympics: Possible History or Plain Hype?

Absurd as it seems, the world woke up in disbelief at Kim Jong Un’s recent New Year’s speech addressed to “all Koreans at home and abroad”, with a call to make a “breakthrough” for unification. And sure enough, on February 9, 2018, a united delegation of sportsmen of the two Koreas marched under the blue and white Korean Unification flag for the PyeongChang Winter Olympics in South Korea. Furthermore, the countries are also fielding a unified women’s ice hockey team. It’s a win-win for ‘sports diplomacy’ but is the emotional tide strong enough to bring about unification?

Looking back, the picture is not so pretty. The Korean peninsula has had a troubled past. In 1910, it was annexed and ruled by Japan. After Japan’s defeat in World War II, the Korean nation was divided by the United Nations in 1945 into two zones; the north under the erstwhile Soviet Union and the south under the U.S. The 38th parallel was selected as the dividing line. This was to be a temporary arrangement and not a partition. However, unfortunately with the onset of the ‘Cold War’ the once allies -the US and the Soviet Union, became enemies, leading to separate and hostile governments on either side of the border and culminating in the bitter Korean War of 1953.

A unified Korea is like the elusive biblical ‘Promised Land’ and many older Koreans still get teary eyed discussing the issue. For too long, Koreans have suffered injustice and separation from their families and relatives since the war. Heart rending images are seen at every official reunion held by the two states for separated families. But does everyone feel that way? Do the Korean’s really want unification?

Opinion polls in South Korea have shown that the emotion of separation is experienced only by the older generation. The young South Koreans, though pregnant with desire do not want to undergo labor pains in the delivery of the ‘new baby’- and are wary of additional taxes, competition unemployment and inflation that come its way. A ‘United Korea’ to them is no longer a sacrosanct goal. Also, the very thought of unification seems unrealistic; an integration of absolute un-equals and also absolute opposites: a rich, progressive capitalist society on one hand and a poor, totalitarian, communist society on the other. Feelings of fellow North Koreans about the issue remain unknown due to the country’s isolation.

There is no novelty in the sudden clarion call for unification and that explains the lack of enthusiasm on the issue. At least three attempts have been made in the past on the issue but have been thwarted by North Korean ‘antics’— in 1988 , joint talks were derailed when Pyongyang bombed a South Korean airline at the time of the Seoul Olympics. Again a joint Declaration of Denuclearization was signed in 1992; but its provisions were soon violated by North Korea. In 2002 North Korea’s torpedo attack of a South Korean naval ship aborted the ‘Sunshine Policy’ initiative of South Korea. This year too, the unification bugle rings hollow with Kim Jong Un organizing a full military parade and weaponry display in his country just one day before the Seoul Winter Olympics.

It is not going to be easy for the separated Korean sisters to unite, in this family saga – complete with treacherous uncles Japan and China and foster mothers U.S and Russia wanting to be a part of her story. Getting the North Koreans to back down from its nuclear weapons program with Trump at the helm in America is not easy. To North Korea, nuclear weapons are viewed as integral to their very survival. China is paying only lip service to the unification. Secretly they do not desire one as a unified Korea on South Korean terms would mean a U.S. ally on its borders. Japan is wary of a new super power in the region with probable leanings towards China. That is why many feel that unification would be brought about only in the event of a collapse of the North Korean government and not by planned political negotiation. But it’s almost three decades since the fall of Communism… but North Korea is nowhere close to falling.

The German model of unification also cannot be followed in the present case. The two German nations were not at war with each other unlike the Korean nations. Moreover West Germany had made persistent efforts to engage the East with ministerial level exchanges, access to information, tourist visits by East Germans which united the minds and hearts of the German people. The German unification was unplanned and happened at blistering pace, riding high, solely on emotional adrenaline. This scenario seems impossible with the two Koreas with North Korea being an isolated, impregnable fortress. Moreover the ‘cost’ factor of the Germany’s unification had not come to play in the minds of the Germans due to its unplanned nature but estimates put it at 1.3 trillion euros ($1.7 trillion). South Koreans are aware of the ‘exorbitant burden’ of unification and are shying away from welcoming it.

But there is hope. And it is largely amongst the simple ordinary folk. “I believe that one day the two Koreas will reunify. My son, please stay healthy and wait for me until that day comes,” says ninety-three year old Kang Neung-hwan to his son at the state organized reunion.

The world waits, too….