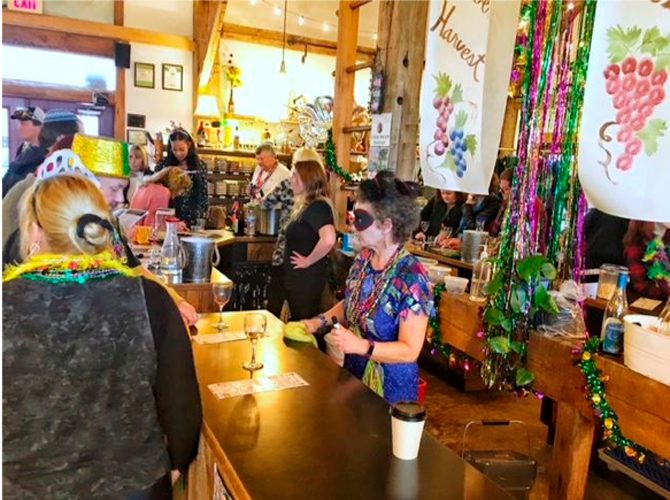 When you think of wine country, you might think about Napa Valley in California or beautiful places in France. But you should also consider the Cayuga Lake Wine Trail, located along the shores of Cayuga Lake, New York, which has the small city of Ithaca at its southern tip.

Ithaca is home to many things — my family on my dad’s side, Cornell University and Ithaca College, and the southern end of the Cayuga Lake Wine Trail. This trail is the first and longest-running wine trail in America, established in 1983. I decided to get a taste while visiting my family, so along with my brother I headed in our car from Philadelphia four hours north. If you look at the website of the Cayuga Lake Wine Trail, you’ll see that they promise tastings of delicious wines that have been awarded thousands of national and international awards, and wow do they deliver.

The Cayuga Wine Trail is part of the Finger Lakes Wine Country, which is named for the Finger Lakes. These consist of eleven long and skinny north-south lakes in New York state south of the much larger Lake Ontario, one of the five Great Lakes. Cayuga Lake is the second largest finger lake. The largest by a small margin is its neighbor to the west, Seneca Lake, which also hosts famous wineries and a wine trail.

The Finger Lakes Wine Country is world renowned for its rieslings, a white wine originating in the Rhine region of Germany. But in my experience its other white wines and its red wines are pretty good too.

The particular event we went to was held in celebration of the Mardi Gras holiday that had just concluded. Upcoming events include Bacon on the Lakein March 24 and 25 in which the fourteen wineries participating all serve as their food snacks bacon tidbits, and Wine & Herb Event on two weekends, April 28 and 29 and May and 6, in which you get small herb plants you can use to start your herb garden.

At the Cayuga Lake Wine Trail Mardi Gras Festival we went to, we were given colorful Mardi Gras beads at each winery. Lots of beads! We were also given a chance to win prizes. Last but not least, we were given three or four tastings of wines of your choice, from red to white, dry to sweet, food samplings, and sometimes even vodka or some other spirit as well.

We went to nine wineries in all. Here are my favorites: 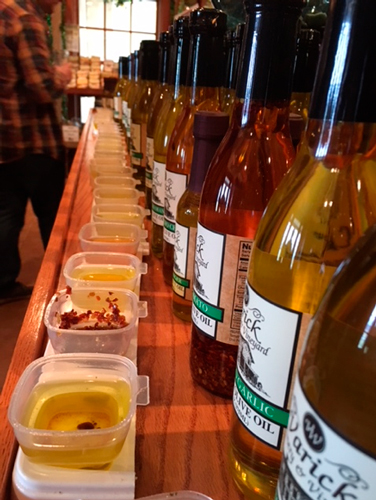 Our first stop was Lucas Vineyards. As with all similar multi-winery festivals held at the Cayuga Lake Wine Trail, as you enter you’re given a souvenir wine glass to keep with you during your tastings and to take home afterward. A $35 ticket enables you to generously sample the wines of the fourteen wineries that participated in this event as well as snack on food samplings in each winery. Optional tickets for designated drivers cost $17.50. You can visit any or all over the wineries one time during Saturday or Sunday or both days from 10 a.m. to 5 p.m. If you fall in love with any of the wines you taste, you can optionally buy a bottle or bottles to take home with you, though there was no pressure to do so.

Lucas Vineyards was the region’s first winery, established by Ruth Lucas 35 years ago, which gives her the distinction of being one of the country’s first female winemakers. Because of her efforts the Cayuga Lake Wine Trail exists. Her wines were delicious.

Another winery we went to was Swedish Hill Vineyards & Winery, It also offered delicious wines to taste. Here, though, I partly hung back from the wine-imbibing crowd to speak with one of the employees.

Rachel Sergeant, who’s the marketing and public relations coordinator, told me: “This is my first time working at a winery, and I actually just started this past Tuesday. I think the whole operation is fantastic. The range of people who come here are wonderful, and everyone seems happy and enjoyable to be around. We sell a wide variety of different wines, and I have yet to try one I don’t like.”

Later, walking into Knapp Wine was like walking into a magical prom night. Barrels of wine lined the walls with colorful strings of light hanging from both barrels and the ceiling. The vibe and smell was rustic and comforting, and the place smelled like, well, wine!

When entering each winery, before making your wine-tasting selections, you’re first presented with a taste of one of their signature wines along with and a tasty food bite they pair it with. At Knapp Wine we were greeted with spicy, yes spicy, chocolate cake and your choice of three different wines before being directed to the actual wine tasting. You’re given a list of offerings on paper, and you make your selections. As you’re poured your wine, the sommelier describes its individual characteristics and history.

Knapp Wine also offered a lot in both decor and tasting, which made this experience great. But my favorite part was a tasting of their mint cucumber vodka. It was cold and refreshing, and this really cleansed my palette in a way I can only compare to the scene in the movie The Princess Diaries when Princess Mia ate all that ice cream. 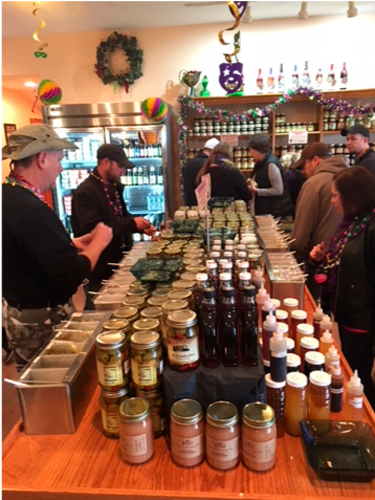 One of the last wineries we went to was Varick Winery & Vineyard. There I had a chance to speak with the owner of the winery before I began my tastings. Bob Rozzeno, both owner and family man, has been apart of this Mardi Gras festival for fourteen years, and he does five or six other festivals each year. He says this spreads the word about his winery along with helping to boost sales. I asked him what advice he could give to someone on opening a winery. He said, “If you want to make a lot of money, start off with a little.” 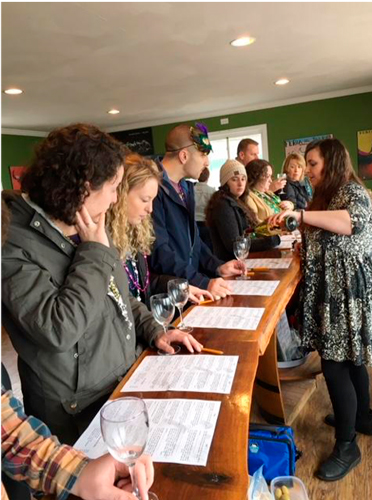 My favorite part about Varick Winery & Vineyards besides the wine was the large selection of delectables they offered for tasting and buying. Included here were salsa, other sauces, mustard, olive and other oil, crackers, cookies, and candies. Rozzeno personally offered me a bonbon infused with wine and gummy bears soaked in wine.

According to Rozzeno, “This is a family-owned business, and we try to be different with our store inside the winery by offering such a variety of other things like gummy bear shots and wine slushies. And in September and October you can chuck pumpkins.”

I like to consider myself both a wine enthusiast and an avid traveler. I highly recommend taking a trip to Cayuga Lake to experience this amazing wine trail and all of the other things you can do in and around Ithaca, New York.

For an Ithaca local, this experience can be a reminder of how rewarding the Finger Lakes can be. According to Rachael Shapiro, “I really enjoyed the Gras celebration. Living in Ithaca, we can easily participate in events like this. It reminds us of the beauty of the amazing Finger Lakes that is just in our backyard. But the best thing for me was being with family and doing this as a group of seven people.”

Each winery has its own unique story and host of wines to sample. All in all, a very good time.